Nasrallah: 'The game is over'

In an interview with pan-Arab news channel Al-Mayadeen, Hezbollah Secretary-General Hassan Nasrallah talked about sensitive regional issues, mainly the Syrian crisis, saying that "the game is over" there with the failure of hostile plans. 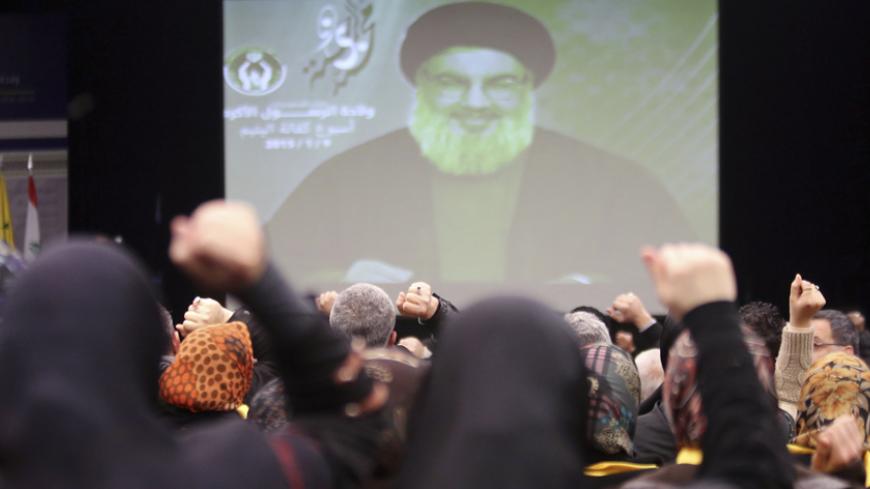 “The game is over,” Hezbollah Secretary-General Hassan Nasrallah said. “All hostile attempts to execute plans in Syria and Iraq failed,” he said in the three-hour interview with the pan-Arab news channel Al-Mayadeen on Jan. 15.

Nasrallah’s interview was packed with messages on Israel, Syria, Iraq, Bahrain and Iran; in rhetoric, it seemed offensive, non-conciliatory and threatening, yet between the lines, there were stances that could be seen as new and promising, mainly on Syria.

Regarding the front with Israel, Nasrallah reiterated his threats that Hezbollah is capable of occupying the Galilee and beyond, if necessary, thereby confirming previous reports that his party possesses Iranian Fateh-110 missiles. “We have had them since 2006, today we have much more sophisticated missiles … We have all [the weapons] you can imagine, and in great quantities; we are now stronger than we ever were as a resistance movement," he said.

This might be the first time that Nasrallah mentioned an advanced missile in his party’s arsenal, for he always preferred to be ambiguous about the kinds and numbers of rockets Hezbollah has. Nasrallah’s statement can be interpreted as part of the longtime deterrence strategy adopted by Hezbollah, the aim of which is to postpone any attack as much as possible, by giving a clear hint on the party’s level of armament. Yet, the Hezbollah leader said: “There is deterrence on both sides of the border. If the resistance decides to force a confrontation, it should be aware that Israel is a strong enemy and the Israelis also know the resistance is strong and capable.”

Regarding the latest Israeli raids on targets in Syria, Nasrallah said these attacks were against the “resistance bloc.” He said, “This means the whole resistance bloc is responsible for the response and that might happen at any time,” giving the impression that the “resistance bloc” has become a kind of unifying body that takes the lead in taking political and military decisions, especially since he explained in-depth the situation in Syria, politically and militarily, and with regard to any possible solutions in the future.

Nasrallah seemed more like the custodian of the Syrian regime than the leader of the regime’s strong Lebanese ally. He drew the red lines, analyzed the efforts and gave recommendations, and criticized Turkey as never before by accusing it blatantly of being the main country backing and supporting the Islamic State (IS) and Jabhat al-Nusra. However, in regard to Iraq, he pointed out a change in Ankara’s strategy.

His unprecedented verbal attack on Turkey was accompanied by critiquing the Saudi role in Syria, which he said is the weakest of them all. Yet, Nasrallah revealed that one main Gulf country backing Bashar al-Assad’s opponents would not object to keeping the whole regime intact, including the army and the Baath Party, on the condition that the president steps down. He said, “They [the Saudis] are hopeless, and they know they can’t change anything on the ground; it’s just a matter of personal grudges.” He suggested that the departure of Assad is no longer Washington’s main concern. “The depth of the US stance is that the Americans do not care if Assad stays or steps down, but they didn’t arrive here without paying a price. Even the opposition, if it was left without regional influence, wouldn’t mind sharing power with President Assad. Developments in Europe and abroad will prove to the international community that there is no solution without Assad.”

Nasrallah indeed reflected a positive view on Assad and his regime from the US side, but a question on his meeting with the Russian president’s special envoy to the Middle East, Deputy Foreign Minister Mikhail Bogdanov, gave a different impression. “Did you tell Bogdanov that Assad is a red line?” the interviewer asked, to which Nasrallah replied, “This is correct but I don’t remember saying these exact words — even Russia will lose if it gives up on President Assad, and I’m not saying it is.” The Russian plan for Syria — asking for serious sacrifices to reach a political solution — was said to have intimidated the regime in Damascus.

The political solution in Syria was a main subject in the interview with Nasrallah. He emphasized that any solution must include Assad, and that the regime’s army must hold control of most of the Syrian territories and that IS, Jabhat al-Nusra and the Free Syrian Army (FSA) take control of the rest of the country. In this regard, he left the door open by saying, “Even if the political solution means that Assad should go after the end of his term, this should be in coordination with him.”

Nasrallah suggested that there is a draft for a solution circulating among some Arab countries, which intends Assad to continue his term and a national unity government to be formed with both the “government and the moderate opposition. Nobody is suggesting that IS or Jabhat al-Nusra be part of the government, neither do I think their structure, ideology or understanding allows them to,” Nasrallah said. He added, “A committee needs to be formed to review the constitution and reforms, and a dialogue established. Some might suggest that early parliamentary elections be held — this is what’s being suggested — or that the president gives part of his powers to the Cabinet, not all his powers.”

In connection to the Syrian crisis, Nasrallah revealed that ties with Hamas have resumed, and that the longtime former ally showed a strong will to strengthen bonds with Iran and Hezbollah, though serious issues continue to hurdle any possible mending of relations with the Syrian regime. Hamas, according to Nasrallah, has its own view on Syria, and “even if Hamas chooses to mend its relationship with the Syrian regime, Syria might have some difficulty accepting this due to past events and developments,” he said. He added there is no proof that any of the Palestinian factions, mainly Hamas, gave orders in the past to its fighters to fight against the regime in Syria.

This busted a myth that has been circulating for years among the pro-resistance and resilience bloc media machines on the role of Hamas in training the Syrian opposition and building a tunnel infrastructure in Syria. It is also an indication that the bloc — mainly Hezbollah and Iran — is becoming flexible with those who disagree with them on Syria, meaning that once again these parties started viewing developments and alliances from a different angle, not only related to the crisis in Syria.

Regarding Iraq, Nasrallah criticized the United States, saying that the anti-IS coalition led by the United States is not aimed at ending IS' activities, but rather attempts to contain it and build military bases in Iraq, once again. He highlighted the Iranian role that “helped the Iraqis stop IS’ attacks and gain back their lands,” and praised the commander of the Quds Force, Gen. Qassem Suleimani, as a “beloved and dear brother who leads the Quds Force, and whose main mandate is helping the resistance groups in the region. Hezbollah is the leading resistance group in the region, so our relations are [among] the closest and strongest.”