Should Iran fear a Trump presidency?

New US sanctions could end up isolating Washington, not Tehran, as Iran gains ground in the region; Obama’s decision to target Jabhat al-Nusra leaders could lead to breakthrough on Aleppo. 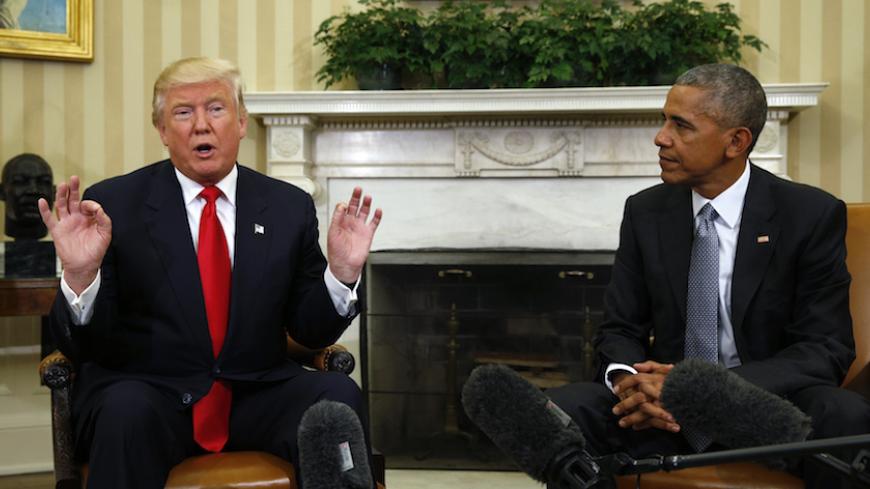 US President-elect Donald Trump will give priority to new sanctions and pressure on Iran, while considering whether and how his administration might seek to renegotiate the Joint Comprehensive Plan of Action (JCPOA).

The trend in Europe and Asia, however, is heading in the other direction, where the emphasis is on breaking down, rather than erecting, barriers to business and engagement with Iran. It is difficult to envision a global retreat from Iran, absent an Iranian breach in its commitments to the JCPOA.

During the upcoming lame-duck session, the Senate is likely to take up several Iran sanctions bills, including targeting countries and individuals that support Iran’s ballistic missile program. Julian Pecquet reported that the House Rules Committee is preparing legislation that seeks to block the sale of Boeing civilian aircraft and prohibit Export-Import Bank financing of deals with Iran.

These initiatives foreshadow what is likely to be a well-coordinated effort by the incoming Trump administration and the Republican-majority Congress to pressure and sanction Iran with the goal of a possible renegotiation of the Iran nuclear deal, as Trump promised to do during the presidential campaign. Even if Hillary Clinton had won the presidential election, there seemed to be a consensus that more sanctions bills would have been forthcoming, as The Washington Post reported.

It is uncertain whether the Trump administration could force a renegotiation of the nuclear deal, unless the International Atomic Energy Agency reports a violation by Iran. EU foreign policy chief Federica Mogherini told CNN Nov. 9 that the JCPOA “is not a bilateral agreement between the US and Iran. … It’s a multilateral agreement that we have negotiated … enframed into a UN Security Council resolution, actually more than one.”

The EU is seeking a presence in Iran. Changiz Varzi reported that while Iranian hard-liners may seek to complicate or thwart the effort, Iran’s Foreign Ministry grasps the trade and diplomatic benefits of an EU office. Russia and China, like the EU, are signatories to the JCPOA and are already at the head of the queue for business with Iran. Blocking the Boeing aircraft sales would be a loss for the American company and a benefit to Europe’s Airbus.

Saudi Arabia, however, might welcome and encourage the Trump administration to turn up the heat on Iran. Bruce Riedel wrote that the kingdom is losing ground to Iran in regional affairs, as it lacks “the tools and instruments to project power that Iran has developed over decades. There is no Saudi equivalent of the Islamic Revolutionary Guard Corps (IRGC), which can provide expertise and advisers to groups such as Hezbollah and the Houthis. There is no Saudi general like Qasem Soleimani, the head of the Quds Force in the IRGC with years of experience in covert operations. The Saudis have good intelligence services but they are not on-the-ground, battle-hardened practitioners like the IRGC. Riyadh traditionally has relied on financial support to project power. With the fall in oil prices, that is harder to draw on. Saudi Arabia canceled a multibillion-dollar military aid project for Lebanon in part to save money. The rivalry is costing both Riyadh and Tehran a fortune, but there is no end in sight.”

“Iran will not become the hegemonic power in the region,” Riedel concluded. “It faces many enemies and constraints. Iraqi, Syrian and Lebanese Shiites do not want an Iranian overlord. But Iran is increasingly the most influential player in the Fertile Crescent at the expense of Saudi Arabia.”

In Lebanon, which is often a bellwether for regional trends, Michel Aoun’s election to the presidency, and his brokering of Saad Hariri’s return as prime minister, which involved deft diplomacy with Hezbollah, can be taken as another sign of Iran’s regional ascendancy. Ali Hashem reported that Iranian Foreign Minister Mohammad Javad Zarif was the first foreign minister to congratulate Aoun during a visit to Lebanon that included meetings with Hezbollah Secretary-General Hassan Nasrallah, as is custom, and Hariri, a sign of the new Lebanon trend. Although the new Lebanese government was blessed in Tehran, Hashem warned that the “Iranian-Syrian-GCC [Gulf Cooperation Council] race in Lebanon confirms fears that the new Lebanese administration is going to face serious challenges with respect to regional differences.” As this column reported last week, Aoun’s ultimate objective is to forge an independent, nationalist course for all Lebanese, which will require continued, steady navigation of regional currents.

The Obama administration has directed the Pentagon to give priority to targeting the leaders of al-Qaeda’s Syria affiliate, the so-called Conquest of Syria Front (formerly Jabhat al-Nusra), a shift in priorities that may offer the potential for a breakthrough in US Syria policy, including an end to the siege of Aleppo.

Adam Entous of The Washington Post reported, “Officials who supported the shift said the Obama administration could no longer tolerate what one of them described as ‘a deal with the devil,’ whereby the United States largely held its fire against al-Nusra because the group was popular with Syrians in rebel-controlled areas and furthered the US goal of putting military pressure on Assad. Russia had accused the United States of sheltering al-Nusra, a charge repeated Thursday in Moscow by Russian Foreign Minister Sergei Lavrov. ‘The president doesn’t want this group to be what inherits the country if Assad ever does fall,’ a senior US official said. ‘This cannot be the viable Syrian opposition. It’s al-Qaeda.’”

The new approach, which the Post suggests would accelerate under a Trump administration, is vindication for US Secretary of State John Kerry, who had sought to work out a deal with Russia that would have included military coordination against Jabhat al-Nusra. We shared Kerry’s view that arguments within the administration against working with Russia to take the fight to al-Qaeda were “completely screwed up,” and, unlike many media outlets, this column has avoided lumping Jabhat al-Nusra and its jihadi brothers-in-arms, such as Ahrar al-Sham, as “rebels,” simply because they are fighting Assad.

The shift in US priorities should lead to wider recognition and reporting of Jabhat al-Nusra’s role in Aleppo. The UN plan for Aleppo includes the departure, not the accommodation, of Jabhat al-Nusra forces. UN Syria envoy Staffan de Mistura said in October that 1,000 Jabhat al-Nusra fighters are holding Aleppo “hostage,” and that he would personally escort them from the city, if they would agree to leave.

Ending the siege of Aleppo, including the defeat of Jabhat al-Nusra, is more urgent than ever. Jan Egeland, the special adviser to de Mistura, warned this week of mass hunger in advance of a “killer” winter. Humanitarian assistance can only take place in the context of a US-Russian agreement. Building on a shared interest in defeating al-Qaeda’s affiliate is a good place to start.