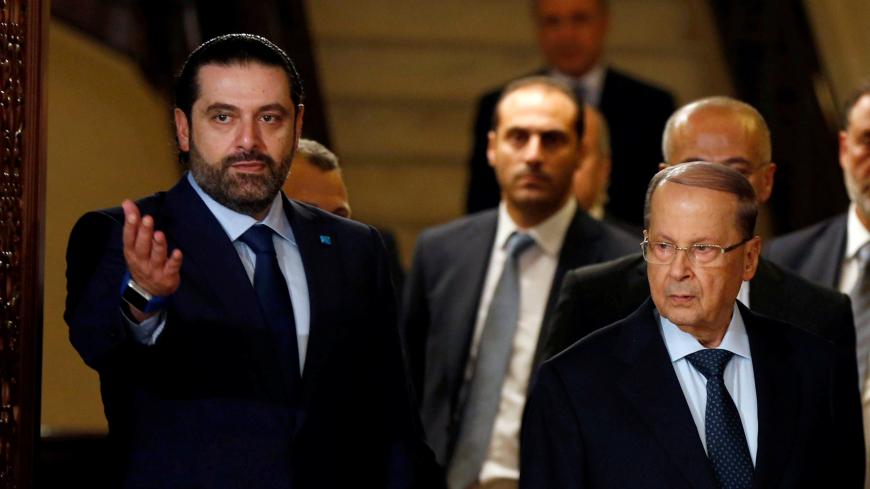 Former Prime Minister Saad Hariri (L) walks next to Christian politician Gen. Michel Aoun in Beirut after Hariri said he will back Aoun to become president of Lebanon, Oct. 20, 2016. As part of the deal, Hariri would become prime minister again. - REUTERS/Mohamed Azakir

Gen. Michel Aoun, the leader of the largest Christian bloc in the Lebanese parliament and an ally of Hezbollah, is expected to assume the presidency Oct. 31 in a deal that would see Saad Hariri, the leader of the Future Party, return as Lebanon’s prime minister.

Lebanon has been without a president since May 2014. The new arrangement offers the prospect of more effective governance and, despite the familiar faces, reflects a potential sea change in Lebanon’s political landscape. In regional terms, Hariri’s decision to cut a deal with Aoun and Hezbollah will be seen as a victory for Iran and a loss of Saudi influence.

Ali Hashem reports, “Hariri’s move stirred controversy among his political movement and within his popular base, prompting several members of parliament from his parliamentary bloc to declare openly that they oppose their leader’s decision, and will not be voting for Aoun.”

Former Saudi diplomat Abdullah al-Shammari told Hashem, “This is an implication of the change in relations with Saudi Arabia, mainly with the new leadership that deals with Lebanon reasonably and not passionately.” Shammari added, “Maybe this is good for Hariri. It is time for him to take his decisions by himself after all these years of addiction to Saudi money and staying at his palace in Riyadh; it is time for him to gain strength and return to his popular base.”

Hashem explains that “the former Saudi diplomat was referring to the financial crisis Hariri is facing, and the attempts to convince the Saudi royal family to save him from this crisis. Hariri’s main company, Saudi Oger, had failed for months to pay the salaries of its employees due to serious financial setbacks influenced by the economic situation in Saudi Arabia and the shaken personal relationship between Hariri and Saudi Crown Prince Mohammed bin Nayef.”

Hariri, Hashem writes, “found himself at a crossroads — either he goes for an all-in political gamble, or he preserves the status quo until the situation changes in the region. Hariri felt the heat after several serious developments, one of which was the municipal elections in May. The election results, mainly in Tripoli, showed Hariri losing popularity to new competitors from within his political movement. Ashraf Rifi, the resigned justice minister — and a hawk who links himself to 'Harirism,' but not to Saad Hariri — was the man whose list defeated all political movements allied together in Tripoli. … If Hariri does not return to the government as prime minister and re-establish ties with the grassroots community, his political future might be in tatters — therefore there was a need for a shock. It did not really matter whether the shock was positive or negative; the most important thing was to shake the status quo and head toward a new chapter. This is a chapter that Hariri’s opponents within his movement see as gloomy; still, this may not be the case, putting aside the political impact of Aoun’s election.”

Hariri’s return as prime minister may represent “a rare opportunity,” concludes Hashem. The position of prime minister is still the most powerful post in Lebanon’s government. “Being left without a regional caretaker (Saudi Arabia), the young politician is going to do business alone with his rivals without any burdens. It is true that he will sometimes weigh decisions with regional scales, but he will have enough flexibility to build a record as an experienced self-made statesman,” adds Hashem.

Al-Monitor broke the news of a Russian-mediated effort last month to broker an autonomy arrangement for Syrian Kurds, which was rejected by the government of Syria.

Mahmut Bozarslan reports that a Russian delegation came to Syria Sept. 17 with a draft “memorandum of intent regarding the possibility of the Syrian government's granting Syrian Kurdistan ‘special status within the framework of Syria.’ The delegation was tasked with finding a solution to the Kurdish issue in Syria by having the parties agree to the memorandum. Salih Gedo, the secretary-general of the Democratic Party of Syrian Kurds, attended the meeting. "The Russians had a document ready. It was in our favor. They wanted federalism in Syria while reinstating the rights of Kurds. We accepted all of the [stipulations] and suggested some additions.” According to Gedo, the Syrian government's delegation did not accept the agreement, saying it would split the country, and Damascus would not agree to start a dialogue about an autonomous administration.”

Bozarslan adds, “Some political figures in the region have wondered why Turkey has kept silent about Russia's blatant support for the Kurds. Another Kurdish official who was involved in the Khmeimim meeting said, ‘Of course the Turks know exactly what transpired in the meeting. They also know the Syrian regime is not going to accept the Russian plan for an autonomous Kurdish entity. So why should Ankara react and upset Moscow for an illusion that's not likely to work?’”

Another reason is that Russia is giving top priority to resetting its ties with Turkey, including over Syria policy. Amberin Zaman wrote last week that Russia may have offered a "green light" to Turkey’s recent military offensive against the People’s Protection Units (YPG), while seeking Ankara’s assistance to eject Jabhat al-Nusra fighters from Aleppo. The removal of Jabhat al-Nusra fighters is part of the UN plan for Aleppo, as this column has reported.

US plans to "isolate" Raqqa

The US Defense Department is discussing an imminent military operation to “isolate” the Syrian city of Raqqa, the so-called capital of territory occupied by the Islamic State.

Although the Raqqa operation may be “weeks” away, according to US Secretary of Defense Ashton Carter, there is uncertainty about which armed groups will be in the lead, as Laura Rozen reports.

The United States considers the Syrian Democratic Forces (SDF) to be the most effective armed group, but the SDF, which is composed overwhelmingly of YPG forces, is a red line for Turkey.

"We do not need terrorist organizations like the PYD/YPG,” Erdogan said he had told Obama in their phone call [on Oct. 27]. “I said, 'Come, let's remove [IS] from Raqqa together. We will sort this out together with you.' We have the strength,” reports Rozen.

The YPG, Rozen writes, may also not be that interested in diverting its forces from territories it holds elsewhere in Syria, thereby making them vulnerable to Turkish attacks.

There is also the matter of Salafi rebel groups that blend easily with Jabhat al-Nusra, al-Qaeda’s affiliate in Syria, and share the same brutal commitment to Sharia as IS, such as in Idlib and Aleppo, as has been well documented by Amnesty International and this column.

The United States may also have to account for a Russian, Syrian and Iranian role in Raqqa. During a meeting in Moscow Oct. 28 with his Syrian and Iranian counterparts, Russian Foreign Minister Sergey Lavrov made clear that Russia and its partners are concerned about the flight of terrorists from Mosul to Syria and are unlikely to be passive observers to US-led coalition plans in Raqqa. “We are interested in taking measures together with Iraqi colleagues to prevent an exodus of terrorists with weapons and vehicles from Mosul to Syria, which will of course lead to the escalation of the situation in Syria. We think it is important to prevent that; we will discuss this issue with the United States and other members of their coalition,” Lavrov said.