Russia's attempt to broker a Kurdish solution was warmly received by Kurds but got the cold shoulder from Damascus. 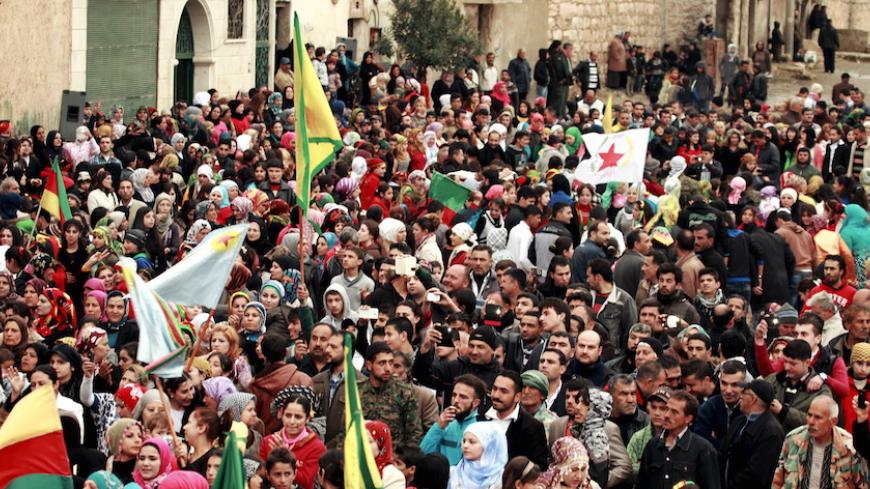 Kurds carry Kurdish flags during a gathering to celebrate Newroz, which marks the arrival of spring and the new year, in the Sheikh Maksoud neighborhood of Aleppo, March 21, 2015. - REUTERS/Ammar Abdullah

DIYARBAKIR, Turkey — Dozens of Russian aircraft land daily at Khmeimim air base near Latakia, Syria. One such aircraft from Moscow that landed Sept. 17 didn’t attract attention, but its passengers, eight officials of Russia's Foreign and Defense Ministries, were carrying documents that one day could alter the political scene of the region.

But not that day.

The documents, obtained by Al-Monitor, included a memorandum of intent regarding the possibility of the Syrian government's granting Syrian Kurdistan "special status within the framework of Syria." The delegation was tasked with finding a solution to the Kurdish issue in Syria by having the parties agree to the memorandum.

Salih Gedo, secretary-general of the Democratic Party of Syrian Kurds, attended the meeting. "The Russians had a document ready. It was in our favor. They wanted federalism in Syria while reinstating the rights of Kurds. We accepted all of the [stipulations] and suggested some additions.”

According to Gedo, the Syrian government's delegation did not accept the agreement, saying it would split the country, and Damascus would not agree to start a dialogue about an autonomous administration.

The memorandum contains five basic proposals. The text follows below:

The Syrian Kurdish Party has suggested, and the Syrian Arab Party has agreed, to discuss the following issues:

2. Recognition of the democratic self-rule system in the cantons [of Jazeera, Kobani and Afrin, which are currently controlled by Kurds] and acknowledgement that members of the self-rule [system] represent the interests of all national and religious groups in these areas, and acceptance of all decisions issued by the legislative council of these cantons.

3. Recognition of the self-protection units and the Asayish [Kurdish police] forces as the legitimate national military forces.

4. The formation of delegations from both parties [the self-rule system and the Syrian government] to coordinate relations between the cantons and the central government in Damascus.

5. Change the name "the Syrian Arab Republic" to "the Syrian Democratic Republic," and form therein a government with varied democratic views on the basis of a federalism system.

Gedo said the Kurdish side suggested adding: Stop Arabs from settling in the Kurdish villages of Jazeera province, restore the Kurds' property and compensate the Kurds for damages they have suffered.

Any disputes during implementation of the terms would be resolved through talks between the two parties. "These disputes may not be resolved in international courts,” the memorandum said.

Gedo emphasized that the issue is not dead and that the Russian side will continue contacts with the Damascus government. He said the proposed agreement allows for flexibility by stipulating that "each of the parties has the right to abrogate the agreement at any time provided it informs the other of such in writing.”

Syria, one of four Middle East countries where Kurds live in large numbers, has about 3 million Kurdish residents, most of them without legal status. With the advent of the civil war in 2011, Kurds began to demand rights and recognition. Main Kurdish towns in Syria on the border with Turkey, such as Qamishli, Kobani and Afrin, came under the control of the Kurdish nationalist Democratic Union Party (PYD).

From the beginning, Turkey opposed this development. Some in Turkey felt the Syrian regime had abandoned the border region to the Kurds, both to avoid opening a new front in the civil war and also as a challenge to Turkey. But when the PYD unilaterally declared autonomous cantons at Qamishli, Kobani and Afrin, nobody, certainly not the Damascus regime, recognized these new entities. Then when the PYD's military arm, the People's Protection Units (YPG), began seizing land between the disconnected cantons, Turkey reacted strongly and declared it wouldn't allow a Kurdish entity to form a corridor on Turkey’s border.

In recent months, Western countries have been supplying arms to the YPG and giving political support to the PYD. These uncoordinated, conflicting interests of outside powers and lack of political cohesion among the Kurds assured that the Kurdish issue in Syria would remain unresolved. Kurds at times built close relations with the United States and at other times with Russia.

So some political figures in the region have wondered why Turkey has kept silent about Russia's blatant support for the Kurds. Another Kurdish official who was involved in the Khmeimim meeting said, “Of course the Turks know exactly what transpired in the meeting. They also know the Syrian regime is not going to accept the Russian plan for an autonomous Kurdish entity. So why should Ankara react and upset Moscow for an illusion that's not likely to work?"