Kurds plan ahead for shifting status in Syria

Syrian Kurds, worried by Turkey’s threat to enter Afrin and a possible rapprochement between Washington and Ankara, are firming up their plans for autonomy. 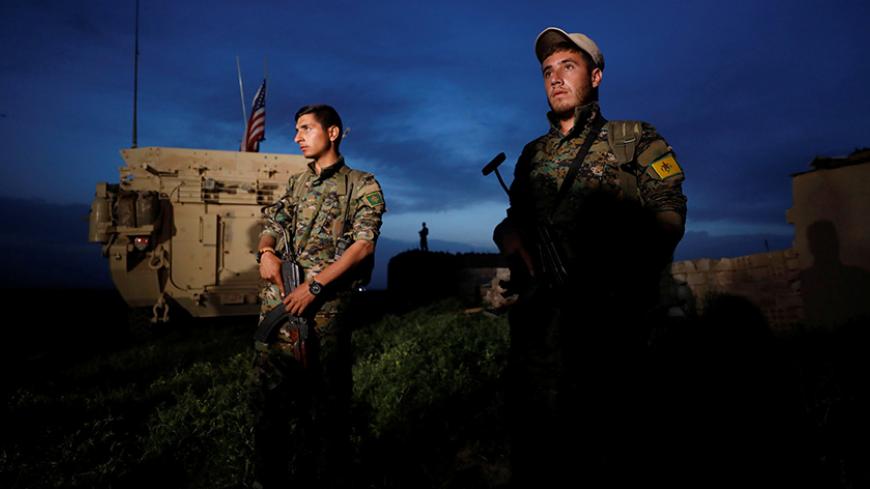 Kurdish fighters from the People's Protection Units stand next to a US military vehicle in the Syrian town of Darbasiya, close to the Turkish border, April 28, 2017. - REUTERS/Rodi Said

Syrian Kurds are taking critical steps to deal with the threat of being caught in a vise between their worsening relations with the Damascus regime, and Turkey's possible cross-border operations. Syria's Kurds have just proposed a new governmental structure comprising three federal regions and six cantons in the Democratic Federal System of Northern Syria (previously known as Rojava). They have devised a three-phase election calendar to decide who will run these new areas.

Kurds worry that the US alliance with the Kurdish People’s Protection Units (YPG) will be diluted once the Islamic State (IS) is forced out of Raqqa. They believe that Washington will then opt to improve its ties with Ankara. They are now moving quickly to consolidate their gains before the next Geneva conference on the Syrian civil war.

How is this Kurdish democratic autonomy structure shaping up?

The Constituent Assembly of the Democratic Federal System of Northern Syria convened at Rmelan from July 27-28 and adopted a series of critical decisions, with delegates participating from Jazeera, Kobani, Afrin, Manbij, Tell Abyad and Raqqa. According to a document Al-Monitor obtained, the July 27 decision revises the original cantonal system of Jazeera, Kobani and Afrin into three regions with six cantons attached to them:

You may have heard of Sheba. It's a new name that Kurds are using for the area that covers Jarablus, Azaz, Manbij, Tel Aryan and Tel Hasil, all west of the Euphrates. Of these locations, Manbij is considered to be outside the Democratic Federal System of Northern Syria. Actually, apart from Tel Rifaat, all other locations are under the control of Operation Euphrates Shield forces (fighters from the Turkish army and the Free Syrian Army). Although Kurdish civilian administration bodies have been set up in these places, they, along with Raqqa, are not considered Kurdish-controlled.

An official of the Kurdish nationalist Democratic Union Party (PYD) from Raqqa told Al-Monitor by phone: “After they are liberated, the people of Raqqa will decide their status. We are simply helping them. I think Raqqa will be a Kurdish entity outside the federation, like Sheikh Maksoud in Aleppo.”

The Sheba Region Executive Assembly officially declared the formation of Sheba canton Aug. 6. The assembly was formed in February 2016, with the participation of 17 representatives from Azaz, 17 from al-Bab, six from Jarablus and six from Safira. Since Tel Rifaat delegates joined, the assembly now has 56 members.

According to a decision made at the Rmelan meeting, there will be communal elections Sept. 22, followed by cantonal and municipal elections Nov. 3 and elections for the People's Assembly of the Federal Regions and the Democratic Federal System of Northern Syria People's Congress on Jan. 19.

Amid myriad ambiguities, why did Rojava decide to speed up its work and devise an election calendar?

Turkey says it will not allow an autonomous entity in the region while a "de-confliction zone" is being formed. Security and government officials — and even many members of Turkey’s opposition parties — see that possibility as a threat to the state's integrity and existence. President Recep Tayyip Erdogan made that clear Aug. 2 when he said, “We are determined to expand the dagger we stabbed into their project of forming a terror entity in Syria. Very soon we will take new and important steps in this direction.” Turkey considers the PYD a terrorist group.

Some commentators think the United States will not need Turkey after the Raqqa operation is complete. Washington has persistently asked Turkey to refrain from any action that might affect the Raqqa mission because Kurds have warned they will withdraw their forces from Raqqa to defend their own northern areas if Turkey threatens action.

Faisal Mikdad, Syria’s deputy foreign minister, recently said the Kurdish elections "will be nothing but a joke."

"Syria will never allow the division of its soil," he said. "We know there are Syrian citizens in the north who will not endanger this country. Those striving to divide the country know well the price they will be made to pay."

This is the strongest language the Syrian regime has used in its relations with Syrian Kurds.

Another factor to bear in mind is the new Geneva process. The United States, despite its partnership with the Kurds against IS, couldn’t arrange for the PYD and its allies to participate in the Geneva talks because of a veto by Turkey and the objections of the Syrian opposition. Russia also couldn’t arrange for the Kurds to join the talks in Geneva or Astana, Kazakhstan. But there are rumors that the Syrian opposition, which is about to select a new negotiation team at a Riyadh gathering, may come up with an opening for Kurds. According to the draft constitution leaked to Arab media outlets, Kurds would have a place in the new power-sharing proposal. The president would be Sunni, with one Christian and one Alawi deputy president. There would be a presidential council. The parliamentary speaker would be Druze and the chief of staff would be Kurdish, according to the draft.

A Kurdish representative who was in the Rmelan meeting is dismissive of the Riyadh meeting, which he said will support the regime. “Like the Syrian opposition," he said, "they invited independent Kurds to Riyadh instead of Rojava Kurdish actors. They will recruit a Kurd, but that won’t be anyone representing us.”

The PYD official in Raqqa had this analysis for Al-Monitor: “Whether we have US assurances or not, we are trying to thwart a Turkish occupation by relying on the coalition. There is no US guarantee for Afrin. We cannot yet say that the US will disappear after the Raqqa operation. Deir ez-Zor is next in line [in the battle against IS]. After Raqqa, the political process will gain prominence. The Syrian Democratic Forces [the US-supported alliance in which the Kurds play a significant role] will control all areas liberated, including Raqqa. If Damascus accepts the Democratic Federal System, the problem will be over. If not, the US will support the Syrian Democratic Forces until a solution is found. We don’t know what they are discussing at Riyadh now, but I don’t think the draft constitution will be approved because our [the PYD] model is totally different.

"Moreover, it is not all that important to go Geneva anymore because Geneva came to us. Twenty days ago the Raqqa Civilian Assembly had a video conference with 73 countries that support the coalition. Commanders of US forces come [to us]. Soon, other delegations will also come. In other words, today we have the full backing of the coalition. I don’t favor joining the new Syria delegation [that will be] decided at Riyadh because they will do everything to marginalize us. Turkey is now working on handing over Afrin to the Syrian regime, but we are in contact with the Russians about it. We are ready for every eventuality.”

This is how the Kurds are trying to transfer the situation from the battlefield to the table and raise the bar for negotiations. But do they have a unified, free hand? Can they afford to ignore the multitude of potential spoiler elements on the Kurdish side that have their own interests and aspirations?