In an interview with Al-Monitor, Fawza al-Yusuf, a board member of the Democratic Federal System for Rojava-Northern Syria, spoke about the battle for Raqqa, Turkey's involvement in the conflict and Syria's future. 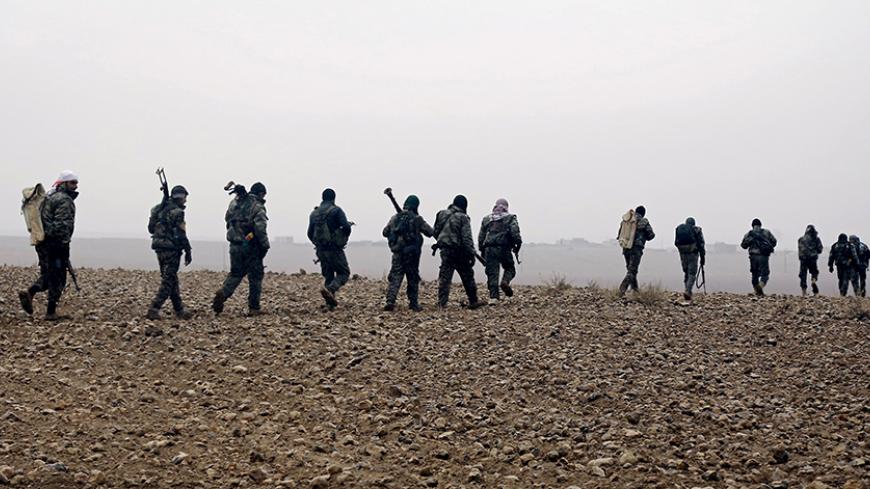 Fighters from the Syrian Democratic Forces walk near the village of Khirbet al-Jahshe, some 35 kilometers (22 miles) from al-Tabaqa on the western outskirts of Raqqa as they advance toward the Islamic State, Dec. 13, 2016. - DELIL SOULEIMAN/AFP/Getty Images

QAMISHLI, Syria — Fawza al-Yusuf, a Syrian Kurd from a modest family, left northern Syria as a teenager and student in 1991, fearful of arrest for her political activities. She joined the uprising that broke out in the Kurdish areas of southeastern Turkey in 1977 and remains ongoing, calling herself Zakho Zaghrous after Zakho, a city in Iraqi Kurdistan, and Mount Zaghrous, which dominates the mountain range between the Iranian- and Iraqi-ruled Kurdish regions.

Yusuf's family was like many others in Rojava, as Kurds call Syrian Kurdistan. She and her three sisters all joined the Kurdish uprising in Turkey, considering it the only way to stand up to the oppression they faced. Fawza’s older sister, Roza, who took the name of another Kurdistan mountain, Joodi, as her nom de guerre, was killed during the Iraqi-Kurdish civil war in 1995.

After 10 years of fighting Turkish forces in the mountains, in 2011 Yusuf returned to northern Syria, with its social fabric of Kurds, Arabs and Assyrians. She is now a leader and sits on the board of the Democratic Federal System for Rojava-Northern Syria, the democratic autonomous administration overseeing predominately Kurdish areas in northern and northeastern Syria.

Yusuf sat for an interview with Al-Monitor Dec. 16 at her office in Qamishli.

Al-Monitor:  What do you feel when you are described as a symbolic leader in Rojava? When did you leave your family and your hometown? Why did you return? Do you see that as a way of fixing the past?

Yusuf:  The Syrian Kurdish people have faced cultural and political annihilation for a long time, due to emergency and martial law imposed on the region. Being involved in any political action was very hard on us because of arrests by the Syrian regime. Many college students were arrested, deported or wanted by security forces. I was subjected to these practices and forced to leave my studies in Syria to carry on with the political struggle abroad, in the Kurdistan mountains. That was at the start of the 1990s.

I would return home secretly to do political work, but due to the security situation and the fact that I was wanted by the regime, I would be forced to leave again. After the start of the Syrian rebellion, and with the political developments in Syria since 2011, I returned home to try and crown the struggle we had been engaged in for long years with a permanent victory and find a solution that would guarantee our people’s political, cultural and social rights.

Al-Monitor:  What do you make of the unclear future of Rojava, given recent events? Why are [Kurds] advancing on Raqqa, where the Syrian Democratic Forces [SDF], the People’s Protection Units [PYD] and Women’s Protection Units are leading the battle to liberate the city?

Yusuf:  The future of Syria as a whole is unclear, and that obviously affects us too, but I am optimistic despite the risks, because the Kurds have played a big role in the fight against terrorism, particularly against the Islamic State. The Kurds today have the strategy and the strength to become an influential player in the Syria of the future. Naturally, there are challenges and risks that we must tackle, but that is also true for anyone with an interest in Syria.

As far as the Raqqa campaign is concerned, there are many reasons. In sum: First, Raqqa is the so-called capital of IS, and every attack faced by Kurdish cities such as Kobani, Tell Abyad and al-Shadadi in the Jazeera region originates there. Unless we liberate that region from IS, we cannot achieve stability and security in our own areas.

Second, the Turkish state and the militias it supports are working to threaten our areas, to in one way or another block our project of building a federation in northern Syria. They are trying to occupy areas near the Kurdish region so they can constantly attack us and stop us from building a political entity that guarantees Kurdish rights. Unless we, as Kurds, respond by taking part in the liberation of Raqqa, the Turks and their mercenaries will occupy Raqqa. On top of that, they will turn it into a military base, posing a permanent threat to us, similar to the situation in southern Kurdistan [Iraqi Kurdistan] and the Bashiqa region today.

Third, it is the SDF that is fighting to liberate Raqqa. The SDF includes Kurds, which is natural as Kurds are nearly 25% of the population of Raqqa and it is their right to defend their brethren there. Fourth, we as Kurds have proposed a solution that includes all parts of Syrian society. We believe that it is a comprehensive democratic solution for Syria that can guarantee the rights of the Kurdish people too. We think that a resolution of the Kurdish issue can be reached within a federal system across the whole of Syria. Therefore the whole issue of Syria concerns us, as does the presence of IS in Raqqa, because it is a barrier to bringing stability to Syria in general, which directly affects our situation too.

Al-Monitor:  Will you cooperate with the regime if a semi-autonomous Kurdish region in Syria is recognized?

Yusuf:  We announced at the beginning [of talks between the opposition and the government of President Bashar al-Assad in 2013] that we were ready to negotiate with the regime and opposition forces to find a solution to the Syrian crisis, but we were cut out, marginalized and prevented from taking part in the Geneva meetings and other meetings on the Syrian issue.

Also, a democratic federal system is the most realistic solution for solving the crisis across the whole of Syria. On that basis, we are ready to negotiate — not just with the regime, but with all powers concerned about the Syrian issue in order to discuss a democratic federal project, and if the Syrian regime accepts that project, we have no objection to negotiating with it. Of course, it would be better if that happened under an international umbrella.

Al-Monitor:  Does the democratic self-rule project in Rojava include Raqqa in the Kurdish provinces once it is liberated?

Yusuf:  The important thing for us is to liberate Raqqa from IS and neutralize the danger that it poses to our areas. Concerning the administration of Raqqa, it is the people of Raqqa who should decide that. The fundamental thing for us is the development of an administrative system that represents all elements, cultural and political diversity, in Raqqa, and that the city ceases being a place where terrorist organizations organize themselves. For us, what is essential are the decisions of the people of Raqqa.

Al-Monitor:  When, in your view, will the war end? When will civil organizations be established in the Kurdish areas of Rojava and northern Syria?

Yusuf:  If no political compromise can be found that pleases all sides, it will be hard to end the war in Syria, as happened in Iraq. Therefore, it is very important to develop a political system that includes all identities, ethnic and religious diversity, in order to avoid the Iraqi experience. I believe the system of democratic federalism we are proposing is the best possible solution for all of Syria, and if not, then the exclusion of one ethnic, religious or sectarian group will mean the war carries on in one form or another, and the end of IS will only mean the appearance of a new IS.

As for setting up organizations in Rojava, after we declared a democratic self-government in January 2014, many political organizations were set up, both civil and cultural, which are active. We defend our areas, and in parallel, we are in the process of building. The organizations are not ignored in spite of the war we’re living through.

Al-Monitor:  What will the creation of educational and administrative organizations in Raqqa depend upon? Demographics or economic and political clout?

Yusuf:  I think it is hard to predict that because after Raqqa is liberated, its people will decide. We will help in whatever way we can to set up a democratic administrative system that delivers equality and justice for all the people of Raqqa, regardless of their ethnic, religious and cultural differences. It is very important to learn from the experience of Tell Abyad and Manbij, and it is vital that the people of Raqqa govern themselves and become self-sufficient in every way.

Yusuf:  Turkey constantly uses the PKK’s presence in northern Syria as a pretext for its attacks, but it is a totally false argument. The truth is that Turkey is hostile to the Kurds and refuses to let them claim their rights in any other country in order to prevent them from obtaining their rights in Turkey. Its arrest of members of the opposition Peoples’ Democratic Party in Turkey and its attack on the Democratic Union Party confirm this. The basic reason Turkey is attacking our areas is that IS suffered a defeat. Turkey doesn’t fight IS, it fights those who are against IS. When Manbij was under IS control, Turkey was unperturbed. It had no problem. But after the Manbij military council liberated the area, Turkey flipped the scales. That shows that Turkey can accept having IS next door, but rejects a democratic force.

After we liberated the border areas from IS, we did nothing to harm our neighborly relations with Turkey and others, despite the fact that Turkey kills many unarmed Kurdish civilians during their attempts to cross the border in search of work. We will stick to this position.

Al-Monitor:  What if Turkey refuses to let you advance on Raqqa? Will you confront it?

Yusuf:  Turkey doesn’t just reject an advance, it also rejects Kurdish participation in the liberation of Raqqa. We cannot accept that because we are Syrian, and it is our legitimate right to take part in the liberation of Raqqa from the darkness of IS and to defend our people there. The first campaign for Raqqa began under the name Operation Euphrates Rage on Nov. 4, and the second stage began Dec. 10 and is still underway. I believe Turkey does not have the power to stop the SDF from advancing.

Al-Monitor:  Do you think US policy toward the Kurds will change when Donald Trump takes office?

Yusuf:  ​We don’t believe US policy will fundamentally change, because America is a state of institutions that has a long-term policy. On top of that, Trump’s statements and positions before the elections and since indicate that the positive relations that have developed will continue and that our cooperation will develop and grow. The battle is still ongoing in Syria, which has become a hell like no other, and the Kurds, with their PYD and Women’s Protection Units, fought alongside the SDF and liberated many towns that were under IS control. 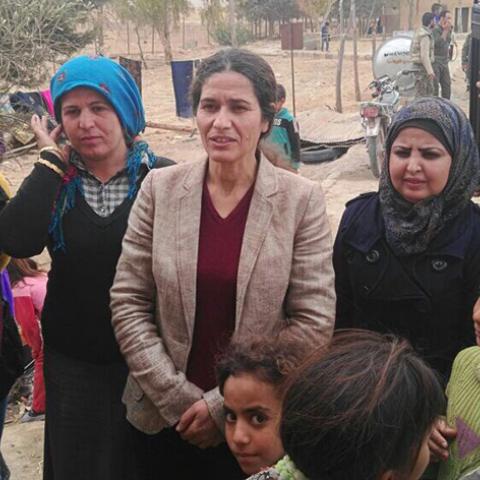