The head of Rojava’s interior committee Kanaan Barakat speaks to Al-Monitor about the achievements of the autonomous administration, the potential for an advance on Raqqa and relations with the Syrian regime. 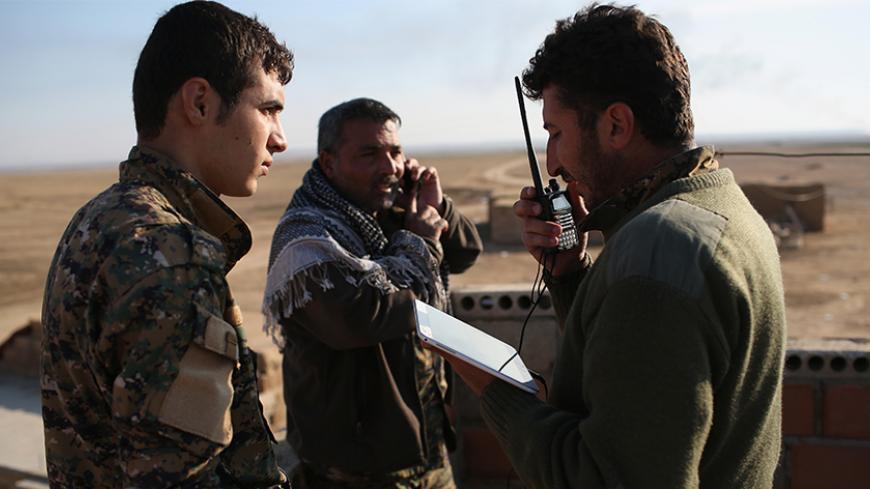 AMUDA, Syria — Interior Minister of Syria’s Jazeera canton Kanaan Barakat, who hails from the city of Girke Lege in Hasakah governorate 50 kilometers (30 miles) from Qamishli, worked as a lawyer until the proclamation of the democratic autonomous administration on Jan. 21, 2014, in northern and northeastern Syria, known as Rojava, the Kurdish region of Syria.

Appointed in May 2014 as head of Jazeera canton’s interior committee, which is a position equivalent to that of an interior minister, Barakat is in charge of security, police and transportation in Jazeera canton. Al-Monitor interviewed Barakat about the recent developments in the Kurdish region of Syria.

Al-Monitor:  How is it possible to govern the Kurdish region given the large swathes of land you control, both Kurdish areas such as the cantons of Jazeera, Afrin and Kobani, and the Arab areas such as the town of al-Shadadi, and others? And what about the northern Syrian town of Manbij [50 miles northeast of Aleppo]?

Security, military and service apparatuses are all organized locally. The administration as well as the councils are organized by people from all these regions; such organization will make it easier to overcome the challenges we are facing.

Al-Monitor:  How are your security forces — with their modest experience — able to ensure stability in Rojava? Is this possible amid the current internal divisions between the autonomous administration and the Kurdish National Council?

Barakat:  Although established only four years ago in 2012, our military and security forces — known as the People's Protection Units and aided by the SDF — have over the past few years of the Syrian crisis been able to ensure stability and protect the people in Jazeera canton and within the areas under the autonomous administration’s rule — in an unprecedented feat thanks to the collective efforts of those who collaborated with us. We have prevailed against the National Coalition for Syrian Revolutionary and Opposition Forces, parties who claim to be Kurdish, as well as terrorist groups of the opposition such as IS and Jabhat al-Nusra, which have been trying since the outbreak of the revolution to spread panic in the three cantons through suicide attacks. Now any citizen of Rojava can move safely and at any time between the town of Derika Hemko [al-Malikiyah], Sere Kanye and Hasakah. Is that possible in any other Syrian city outside Rojava? I don’t think so. This is why I can honestly say that we are doing our best to preserve security in our Kurdish regions.

Al-Monitor:  Concerning news about your battles with the remaining regime forces in Qamishli between April 19 and April 22, and your seizure of the Allaya regime prison, what were your motives behind this? What will happen to the liberated prisoners, as well as the soldiers you are detaining? What are the reasons behind your attack on Raqqa’s northern countryside, specifically in Qamishli? Are you planning on entering the city [of Raqqa]?

Barakat:  The SDF is the armed wing of the Syrian Democratic Council. These forces are liberating all Syrian cities and Rojava as people seek their help to force terrorist groups out. In this respect the decision to enter Raqqa is completely up to the armed forces. There is also the ongoing campaign in Manbij to root out IS fighters from Rojava and the rest of northern Syria, which will be part of the future federal regime including all the areas under its rule.

Al-Monitor:  Are Kurdish forces capable of taking control of these areas including the northern countryside of Raqqa and Manbij, with smaller Arab factions in these areas fighting alongside the SDF?

Barakat:  Many Arab youths are joining these factions in their respective areas, especially since these factions enjoy great popularity there. We are organizing these groups in the same manner as the SDF, and this is also entrusted to the armed forces.

Al-Monitor:  What are you expecting to accomplish after restructuring the autonomous administration in Jazeera canton, thus bringing to an end a period of its rule?

Barakat:  Of course, when the democratic autonomous administration was first established, there was only the head of the executive committee, whereas now a joint presidency is established and representatives were appointed to this executive committee in order for the democratic autonomous administration to intensify work, expand its functions and meet popular demands given its increasing responsibilities and the internal restructuring of all the committees. The two operate jointly with three representatives, each in charge of an area within the committee. In the interior committee tasks are distributed among representatives and heads. We have seen a remarkable advance in this regard because work is demanding and the expansion of these institutions requires further efforts. The organization we have adopted proved efficient and led to larger development.

Al-Monitor:  Given that border crossings between the areas controlled by the democratic autonomous administration, Iraqi Kurdistan and Turkey are closed, how are you managing to meet the people’s demands in your zone of control amid higher food prices?

Barakat:  We are under complete siege, and naturally this affects the residents’ living conditions. We are also in a state of war and facing major challenges. Nevertheless we managed to ensure a degree of stability amid the ongoing siege. We are doing our best to supply our citizens with the necessary tools for agriculture and local production in an attempt to find a way out of this situation. But it is worth noting that food prices in Rojava are a lot cheaper compared to the rest of the cities in Syria.

Al-Monitor:  How would you describe your relationship with the Syrian regime? What are the limits?

Barakat:  We don’t currently maintain any relations with the regime, as we refuse to engage with it. The democratic autonomous administration and the regime, however, discuss subjects related to the future and Syria, Rojava and the administration. We are ready for an open dialogue in the presence of neutral legal and international delegations. Therefore, we cannot speak of a relationship, but rather a dialogue with the purpose of finding a solution for the Syrian crisis.