Is Rojava’s model the awaited solution for Syrian crisis?

In an interview with Al-Monitor, Eldar Khalil, member of the governing body for the TEV-DEM, gives an overview of the Kurds’ situation in the Rojava region, a de facto autonomous region of Syria. 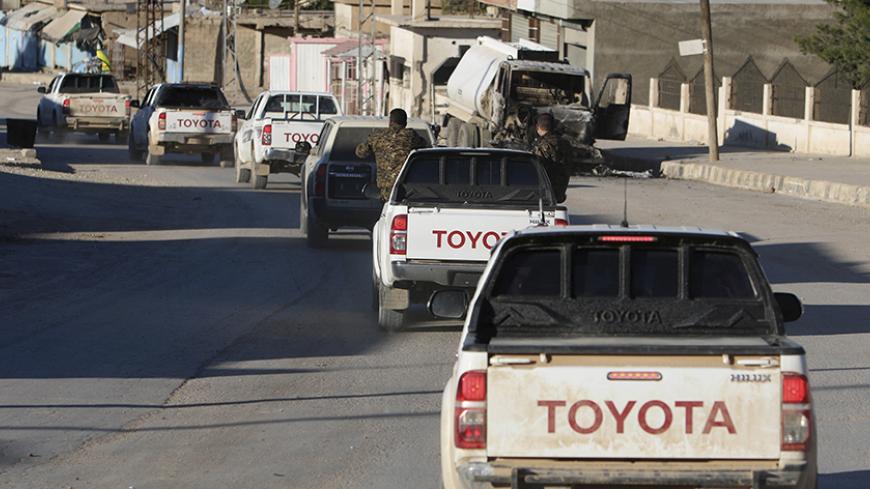 Fighters from the Democratic Forces of Syria drive in a convoy as they enter the Syrian town of al-Houl in Hasaka province, after they took control of it from Islamic State militants, Nov. 14, 2015. - REUTERS/Rodi Said

QAMISHLI, Syria — Eldar Khalil, a Syrian national and member of the Kurdistan Workers Party (PKK), has been the shining star of the Syrian revolution since its outbreak in 2011. He was interviewed on behalf of Kurdish parties and set the foundations for their autonomy project to protect the Kurdish areas in the Rojava region — the term Kurds use to refer to western Kurdistan in Syria — including the Kurdish cantons of Kobani, Afrin and Qamishli.

In the prime of his youth, in the early 1990s, Khalil joined the PKK-linked People's Defense Force. He then became a member of the governing body for the Democratic Society Movement (TEV-DEM) until the founding of the Democratic Union Party in 2003.

He returned from the mountain between the Kurdistan Region of Iraq and Turkish Kurdistan to Syria following the outbreak of the Syrian revolution, and he is still present in Syria, in the northeastern region that has a Kurdish majority and is controlled by the Kurdish interim government and the People’s Protection Units (YPG). Those close to him confirm that Khalil exerts all efforts and works day and night for his cause and people.

Al-Monitor interviewed Khalil, 46, in Qamishli, in his capacity as a member of the governing body for the TEV-DEM. The text of the interview follows.

Al-Monitor:  The TEV-DEM did not ally with the Syrian regime or the Syrian opposition that emerged in Turkey. Yet you managed to control the Kurdish-majority areas in the north and northeast of Syria amid the ongoing developments in Syria since 2011. How do you assess the situation in northern Syria?

Khalil:  We had an interpretation of how the situations in the Middle East will develop based on our comprehensive understanding of the societal complexities and structure differences. We believe upheavals among the popular classes — suffering marginalization and unemployment and living below the poverty line as a result of tyranny, corruption and repression — are inevitable.

Our vision was crystallized through decades of political struggle against the Syrian regime that has ruled the country since 1963 with an iron fist, against the hegemony of its security services over all of the state components and its fierce suppression of opposition.

We had a bitter experience with the regime during the uprising of March 12, 2004, which was suppressed by force. Hundreds of TEV-DEM members were arrested. The Syrian political forces started brandishing slogans calling for peace and freedom in Syria, aimed to militarize the popular movement that called for freedom and dignity and an end to tyranny and to portray it as an Islamic sectarian movement. The regime portrayed this movement as seeking to gain power and replace the authoritarian regime with another similar one. The Kurds did not get trapped in the plot orchestrated by some regional powers, such as Turkey, Saudi Arabia and Qatar, to serve their interests — especially Turkey that has worked hard to displace the Kurds through some of its accessories and tools in the Kurdish region.

The approach we adopted — not to ally with either the regime or the opposition — does not mean we are taking a passive spectator position regarding the [popular] movement. We had a vision that this conflict, which began to take a violent turn and raise sectarian slogans, will bring calamity to the Syrian people, tear apart the social fabric and prolong the crisis. This is why we set constants for organizing our legitimate right to protect and defend our regions and stand against military groups such as Jabhat al-Nusra and the Islamic State that targeted our people. We operated patiently and carefully, making sure not to be dragged into the traps that were set for us. We found that our interests are consistent with those of the democratic forces, such as the YPG, which are working to build a parliamentary, democratic and decentralized state. There is no doubt that our unerring interpretation of the Syrian scene turned us into the strongest party in the [political] equation in Syria.

Al-Monitor:  How did you succeed so fast in controlling the Kurdistan region of Syria, or what you call western Kurdistan, in the north and northeast of Syria and in forming such a strong interim government and creating the YPG composed of 30,000 male and female fighters, while the Syrian opposition itself is still unable to form such a rule?

Khalil:  We managed to do this through our sound diagnosis of the political reality and Syrian society. We relied on organization and on building new institutions in Syria that depend on our people, which are driven by years of struggle, have a will to sacrifice and volunteer. Our people are fully committed to the cause and disciplined. Organized groups are most able to achieve success.

Al-Monitor:  You said you are fighting for your regions and for the Rojava region [northern and northeastern regions of Syria], but according to online information circulating following the battle of Tell Abyad in June 2015, the YPG is heading to Raqqa and Deir ez-Zor, although you have no presence there. Some Kurdish parties [such as the Kurdish National Council] said they are not interested in heading to Raqqa, since it is not a city with a Kurdish majority. But if they were willing to go there, what will be the repercussions?

Khalil:  Raqqa is a Syrian city, and we believe that along [with] the rest of the Syrian components, we have the duty to liberate the entire Syria territory from terrorism and tyranny. We will not have freedom, stability and security if the rest of the Syrian regions are suffering repression and terrorism and if our regions remain under the threat of extremist groups. We are part of the Syrian entity. I don't know which Kurdish group you are referring to, but some are focusing on issuing statements and objections via the media and in newspapers, while doing nothing to rescue the Kurdish people who were killed and displaced from Raqqa.

Al-Monitor:  The Kurdish National Council accuses you of being the regime’s puppet in the region and that you are working under its supervision and suppressing your opposing movements. What is your assessment?

Khalil:  We concluded with the Kurdish National Council a number of conventions, notably the declarations of Hewler I and II and Duhok I and II. These conventions include the formation of joint committees and administrations. If we were the regime’s puppets, why would the council seek to conclude conventions with us? How are the members of the Kurdish National Council practicing political activity and holding conferences? How are their party’s offices wide open in the democratic autonomous rule regions, Afrin, Kobani and Qamishli, or even in the security square in the city of Qamishli, while they are part of the opposition coalition and are presumably targeted by the regime? The members and leadership of the Kurdish National Council are moving freely in regime-controlled areas and practicing their normal activities without facing any obstacles. If they were truly part of the opposition, let them give us the names of their members detained in the regime’s prisons.

Al-Monitor:  You arrested dozens of members of the Kurdish Youth Movement in June 2013 and suppressed youth groups and protests staged against you. Why?

Khalil:  No one has been arrested for engaging in a political activity. Everyone enjoys the freedom to do so, but whoever breaks the laws of the Kurdish autonomous rule is held accountable under the law. This includes the failure to obtain a license for staging a protest or sit-in. We are fighting terrorist groups targeting our region. Those arrested surely have ties with these groups. Some of those who are arrested provide intelligence information or carry out logistics to any group or act as a fifth column in return for a financial profit.

Al-Monitor:  How do you see the future of the region under your control? Do you think that the Kurdish National Council will be your partner in the rule, or do you have an independent political project in the region?

Khalil:  The future depends on the developments in the region in general. International and regional powers are clashing and the scene is open to all possibilities. Yet we managed to create and build an advanced state, a product of [a specific] approach and a principle of coexistence between all of the components of Syria, whether Kurds, Arabs, Syriacs, Assyrians and Chaldeans. We will not renounce the achievements we accomplished. From our regions, we will set our eyes on the Syrian depth, and we believe that the autonomous rule model applied in Rojava will be the example for the rest of the Syrian regions. As for the Kurdish National Council, we have not closed the participation door in the face of anyone. We have different programs. Just like in all democratic regimes, the principle of alternation of power is applied by resorting to elections.

Al-Monitor:  Do you think that the Kurdistan Region of Syria must fall within the framework of a federal regime?

Khalil:  The regime based on political decentralization is deemed the most successful regime in terms of administration and governance. Decentralization entitles each region to have its own policy. The inhabitants of these regions manage their own affairs. The decentralized regime is based on the idea of ​​the distribution of powers between the center and the regions in countries characterized by national, cultural and religious diversity. The federal regime is one of the most successful regimes, while the centralized regime consecrates tyranny and the hegemony of the center over the regions. The autonomous rule model applied in Rojava is a sophisticated form of decentralized governance, which is the ideal model for a solution in Syria.