In an interview with Al-Monitor, Ilham Ahmed, Kurdish co-president of the Syrian Democratic Council, discussed the reasons behind the council's establishment and its aspirations for Syria. 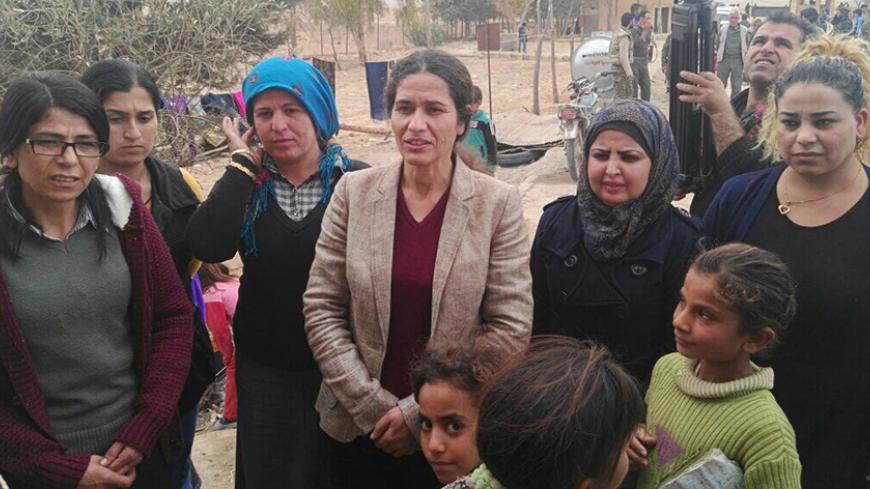 Ilham Ehmed speaks on the plight of Syrian women in the city of Raqqa, Nov. 17, 2016. - @ilham_ehmed/Twitter

QAMISHLI, Syria — Ilham Ehmed chose a path quite different from that taken by most Kurdish women in northern Syria. Instead of getting married and staying at home in line with societal norms, Ehmed chose political action — defying the tribal and social restrictions imposed on Kurdish women in the Afrin district of Aleppo governorate — and became a member of the executive committee of the Movement for a Democratic Society (TEV-DEM).

Since the Syria revolution and civil war, Ehmed has become a prominent figure on the political scene in Rojava, as Kurds call Syrian Kurdistan, seeking to defend Kurdish areas from attacks by Jabhat Fatah al-Sham (formerly known as Jabhat al-Nusra) and the Islamic State (IS). At the end of 2015, she was elected co-president of the Syrian Democratic Council, which formed after the Syrian National Coalition rejected participation by Kurdish and certain other components.

Al-Monitor met with Ehmed in Qamishli Dec. 1 to discuss the impetus behind the establishment of the Syrian Democratic Council and its objectives.

Al-Monitor:  What was the objective of the Syrian Democratic Council, which was established by TEV-DEM along with some Kurdish, Arab and Assyrian figures, and why was it announced on Dec. 9, 2015, at the same time the Riyadh conference was held by the Syrian opposition in Saudi Arabia, Dec. 18-19, 2015?

Ehmed:  After the political process on the Syrian crisis began in early 2013 through negotiations between the international powers and the two most important Syrian parties — the Syrian regime and the Syrian opposition, represented by the National Coalition for Syrian Revolutionary and Opposition Forces — many democratic forces, such as Kurds, Arabs and Christians, were excluded. These forces are considered the main internal opposition with a true democratic project, and they carry the solutions for the Syrian crisis. We believed that this process was shortsighted. It is wrong to assume that the coalition represents all Syrian people and their interests.

The coalition includes some secular figures, but the vision [within the coalition] was and still reflects that of the Islamic movement affiliated with the Saudi-Qatari-Turkish axis. Other components are not fairly represented in the coalition, especially since some of these components in the Syrian north have launched a democratic project in their regions and begun to establish self-governance with strong defensive forces. The coalition did not want to include these components in the political structure, and they were mostly rejected during the Riyadh conference after Turkey used its veto authority against a Kurdish presence and the Kurds’ project to establish a temporary government, given that the negotiating committee in the conference represented Turkey and Saudi Arabia’s strategic goals. This is why the Syrian Democratic Council was formed as a democratic front representing all Syrian components to pursue a comprehensive solution in Syria.

Al-Monitor:  Why did Haytham Manna withdraw from his position as joint president of the Syrian Democratic Council on March 19, 2016?

Ehmed:  He resigned from the council for personal reasons. Some said, however, that he resigned in response to the announcement of the federal system in northern Syria on March 19, 2016, although we debated the project before announcing it in Rojava, and he did not object to the federal regime. On the contrary, he supported decentralization and federalism in Syria and the need to change the Bashar al-Assad regime’s structure. In return, we respected his position and the decision he made.

Al-Monitor:  You have met with a large number of officials in the world but without advertising it. Who did you meet with when you were in the United States? What topics did you discuss? Why are you secretive on this subject?

Ehmed:  I have visited Washington many times to develop relations with the US government, and I have met with several political figures, such as advisers to President Barack Obama, special presidential envoy for the Global Coalition to Counter ISIL [the Islamic State] Brett McGurk, some members of Congress and many others. The main topics we discussed were the developments [in Syria] and how the Syrian Democratic Council can improve its relations with the US government and to what extent we can guarantee the people’s rights as well as develop the democratic project in Syria.

We also discussed the federal regime, and most meetings were in favor of decentralization in Syria. The Syrians are the masters of their own projects, which they will transform into reality themselves, all [the US entities] have to do is support the Syrian people’s demands.

Al-Monitor:  Is there an international agreement on the Kurdish situation in Rojava, or Syrian Kurdistan?

Some parties have changed their positions. Let us take Turkey as an example. It sometimes enters an alliance with Russia, but chooses to go with NATO at others, according to its interests and developments on the ground in Syria. Some new agreements are made while others dissolve when found pointless.

Meanwhile, the Kurdish parties are relatively in agreement over some parts of Rojava. For example, everyone seems to understand that establishing federalism in Shahba will lead to division, and there is a misconception in this regard. It should be noted that the project we seek to establish is not a divisive one. On the contrary, we want to eliminate division from Syria and unite its people through the federal regime. Our project focuses on decentralization and unites the existing land. The misconceptions and the false advertisement, by the Turkish state in particular, however, has painted the federal regime as a divisive project, because [Turkey] does not want the northern areas to be linked to one another.

Turkey is directly intervening [in Syria] and is currently using its special forces, soldiers, aircrafts and all available gear in northern Syria. It wants to build a base for itself, and its goal is quite obvious. It wants to impose itself as an occupying force and move its internal conflict into Syria. Turkey wants to expand its geographic borders and destroy the forces that fought terrorism, such as the Syrian Democratic Forces. It wants to open a pathway toward Raqqa and Deir ez-Zor to finally reach Mosul. This is how Turkey wishes to expand its borders in order to remain able to support IS.

Al-Monitor:  With the Syrian Democratic Council, you have been leading the Syrian Democratic Forces (SDF) toward the Syrian cities of Jarablus, Manbij and recently toward Raqqa, the capital of IS, since Nov. 4. Why was the SDF formed? Why not enter those areas as a Kurdish force under a different name, such as the Kurdish People's Protection Units (YPG)?

Ehmed:  The name of our forces is not as important as the cause, which is to fight IS. The forces that have proved their worth in fighting IS are the YPG, which have launched the campaign in Raqqa and represent the main forces fighting IS under the SDF umbrella. We do not care much whether or not the campaign is launched under the name of Kurdish or Arab forces, so long as the main focus is the brotherly relationship and the solidarity between the armed groups on the ground.

All groups and factions have a single goal: fighting IS. The majority of these forces were formed by residents of Raqqa, while the YPG and SDF have recently completed training a new group of residents and are currently participating in the battles. It is very important for the residents to liberate their own hometown themselves.

The YPG has previously liberated Manbij and helped its military council take control. Today, all these forces remain in contact and continue to show solidarity whenever an area requires help and support.

Al-Monitor:  You liberated Manbij in August 2016 but waited around due to the Turkish intervention in the region. Do you think that Turkey would intervene in the liberation of Raqqa as well?

Ehmed:  Turkey would be present to help IS survive. When the groups supported by Turkey enter a certain area, they destabilize its security. For instance, during Turkey’s Operation Euphrates Shield in Shahba, civilians were assaulted, massacres were committed and property was confiscated. The Turkey-affiliated groups even fought one another to secure gains.

The Turkish groups do not seek to create peace and security in the areas they control. Jarablus is considered a Turkish-controlled area given [Turkey’s] symbols, flags and banners in the streets, and its educational system imposed on Syrians there, in addition to using Turkish currency. If the US and the US-led coalition forces allow Turkish groups to enter Raqqa, they would be making a huge mistake. IS is considered part of the groups that participated in the Operation Euphrates Shield; even if they change their appearance, they share the same ideology and doctrine. An example of these groups is Harakat Nour al-Din al-Zenki, which slaughtered children for allegedly dealing with the Syrian regime. This is why such groups have no place in Raqqa.

Al-Monitor:  After the liberation of Raqqa, how will the SDF be deployed? Will they remain in Raqqa or move to another city?

Ehmed:  The city will be protected by its people. The Kurdish and Arab groups living in the city will protect it themselves. However, the option to move to another city is not currently on the table.

Al-Monitor:  Does the Syrian Democratic Council have political power, albeit symbolic, in liberated Arab cities, such as Manbij and Raqqa’s northern countryside, among others?

Ehmed:  Some figures were elected members of the Syrian Democratic Council [during the Dec. 9, 2015, conference], but as members of the political committee, not as parties. Some are in Manbij, Arfin, Hama, Shahba, Jalba and other areas.