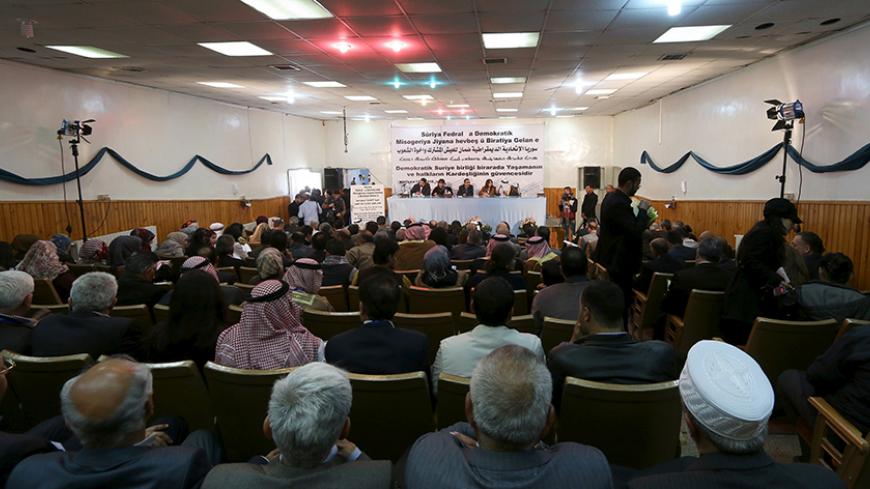 Many analysts are busy trying to understand the motivation that led to the unexpected declaration recently of a federal system by Syrian Kurds, who until then were promoting a cantonal model that would incorporate divergent ethnic and religious groups.

Al-Monitor asked Abdul Karim Omar, the top foreign relations official of Jazeera Canton, at a March 16 meeting in Brussels: Why, and why now? The decision came at the same time as Russia’s acquiescence to federalism if the Syrians so choose and the decision by Russian President Vladimir Putin to withdraw some troops from Syria. Was it a coincidence or a ploy the United States and Russia agreed on to put pressure on the Turkish government? Did someone whisper something into Kurdish ears? Or is it an attempt to keep the Kurds out of the Geneva process?

Omar dismissed the conspiracy theories and tried to explain the situation in practical terms regarding Rojava, which is what Kurds call Syrian Kurdistan, and surrounding areas.

As currently outlined, the Federal Democratic System of Rojava and Northern Syria would have a population of about 4 million and would incorporate Rojava's three cantons — Jazeera, Kobani and Afrin — as well as Tell Abyad and areas in northern Aleppo province that have been recaptured by Kurdish forces.

"We need a new system for those areas for their security, economy, health and basic needs. Our declaration of a federation is not nationalistically motivated. Shyouk, Shadadi and Tell Abyad will be part of the federal system but run their own affairs. Syriacs and Assyrians have 40 villages. They told us they want to set up their own assembly. When Raqqa is freed from [the Islamic State (IS)], it will also be part of the federal system," Omar said.

He added, "This is a model we are forecasting for Syria’s future. The transition to a federation could be risky, but in politics, what isn’t? If we don’t move toward decentralization, we can’t solve the issue of terror in Syria. After five years, you can’t simply go back to the former status. We are not acting because of a green light from the United States or Russia, but according to our own needs."

For example, the first congress of the Sheba region convened Jan. 28 and declared that it only recognizes the Syrian Democratic Forces (SDF) set up by the People's Protection Units (YPG), Arab and Turkmen groups, and the Democratic Syrian Assembly that was formed to send a delegation to the Geneva peace talks.

Also, after ridding Tell Abyad of IS, the Kurds established a 113-member assembly and an executive council made up of seven Arabs, four Kurds, two Turkmens and one Armenian.

All of these previously quiet activities suddenly emerged as the Federal Democratic System of Rojava and Northern Syria in a congress that met March 16-17 in Rimelan with 200 representatives of Kurdish, Arab, Syriac, Turkmen, Armenian and Chechen peoples of the region. The congress elected a 31-member committee to address the logistics of establishing the group. The Democratic Union Party (PYD) contributed politically to the process, and the YPG and allies provided military input.

Omar rejected the charge that all those who participated in the meetings were PYD allies.

“No one can say this. Some of the Syriacs are with the regime, some with the coalition and some with us. The [Kurdish Yeketi Party] and the Syrian Kurdistan Democratic Party are not joining us. The Turkmens of Tell Abyad joined, and those allied with the Syrian National Coalition did not," Omar said.

Journalist Barzan Iso, who covered the congress, told Al-Monitor that Muhammed Sultan of the Azaz Turkmens came from Turkey and contributed positively to the meeting.

Despite its enmity toward the PYD, the Kurdish National Council, supported by Iraqi Kurdistan President Massoud Barzani, is pro-federalism for a model. The council’s foreign affairs official Kamuran Haci Ebdo expressed belief that coexistence in a federal system would guarantee Syria's territorial integrity, saying, “The federal system is the best solution for Syria. Federalism is the natural right of all Kurds in West Kurdistan.”

Further support came from the Kurdistan Democratic Party and the Patriotic Union of Kurdistan in Iraq.

In a nutshell, those opposing federalism say it will lead to the country's fragmentation, while those in favor say this is the only way to preserve Syria's territorial integrity. For example, Mensur El-Selum, the Democratic Federal System Constituent Assembly co-chairman, told a town hall meeting in Tell Abyad, “Federalism is more for Arabs than Kurds.”

Turkey is the party that most persistently and vehemently charges that Syria is being divided by the Kurds. The Kurds say the participation of Turkmens in the system is a clear negation of Ankara’s claim of ethnic cleansing. Esad El Yasin, who represented Turkmens in the Tell Abyad meeting, said they support every aspect of the proposed federalism system that benefits them.

As was expected, the Damascus regime stated that the unilateral declaration of a federation is illegal. PYD official Zuhat Kobani told Al-Monitor that recent clashes between the YPG and government forces at Qamishli reflect Damascus’ discomfort with the Kurdish move.

Could federalism really be a panacea for the Syrian crisis, as some insist? Kurds under PYD leadership are confident of their future in Kurdish-majority areas. The Kurds have long debated the concept of democratic autonomy formulated by Kurdistan Workers Party leader Abdullah Ocalan. But this is not a subject familiar to Syria's tribal Arabs. Kurdish sources say they have switched to federalism because many people could not understand what democratic autonomy and a cantonal system entail. The Kurds are an organized community that can handle the democratic autonomy institutions. They have acquired significant local governance experience over the past five years, starting with grass-roots committees in neighborhoods and villages.

Women play a major role in Kurdish self-rule. Kurdish cantons have promoted a 40% quota for women's participation in public affairs. Can this be done in regions where women are denied public roles?

There are many other complex issues, such as how to demarcate the borders, the structure of the public administration, quotas for ethnic groups and how to regulate the relations between different areas. The 31-member elected committee was given six months to sort these issues out. For some, this task is very difficult — for others, simply impossible.

According to Iso, the borders of the federal system will be determined by the limits of YPG domination. The Kurds are not insisting on including locations that the YPG won’t be able to control in the federation. That is why, if liberated from IS, Raqqa could form a separate federal entity. The same goes for El Bab, Menbic and Azaz, where Kurds are in the minority and YPG control is out of the question. They are aware that any attempt by the YPG to impose its rule over heavily Arab- and Turkmen-populated areas would be suicidal. There are already worrying signs of collective Arab tribal resistance to the Kurdish federal move. In those areas, the SDF made up of Arabs, Kurds and Turkmens promotes itself as the core of the future Syrian army and tries to prove that it is in charge.

In short, the freshly introduced federal system will go through a series of serious tests because of international considerations, the attitude of the Syrian regime and the ethnic-sectarian fault lines of the region.