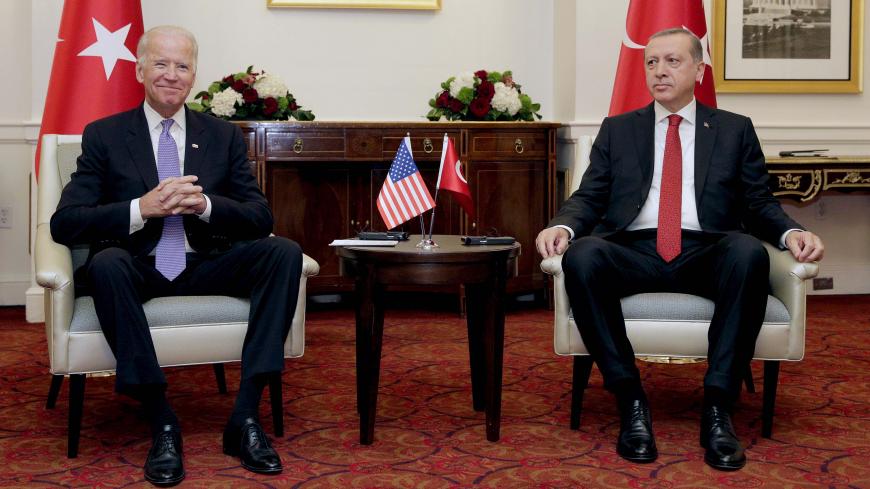 Erdogan not backing down on US support for Syrian Kurds

Erdogan met with US President Barack Obama on the margins of the Nuclear Security Summit on March 31, after having been previously rebuffed in his request for a private meeting. US Vice President Joe Biden, in a separate meeting with Erdogan, “reiterated that the United States considers the PKK [Turkey's Kurdistan Workers Party] a designated foreign terrorist organization, and the two leaders pledged to deepen cooperation in the fight against all forms of terrorism, including the PKK.”

The Turkish president made his case against the Obama administration’s Syria policies at other forums around the US capital, including a dinner hosted by the Turkey-US Business Council for think tankers and former US officials, as well as at events at the Brookings Institution, the Atlantic Council and in a meeting with American Jewish leaders.

Washington got a taste of the Erdogan experience when the Turkish president’s massive security entourage “pushed, threatened, and kicked both Turkish and Western journalists and protesters” prior to his speech at Brookings. As reported by Foreign Policy, “Brookings President Strobe Talbott told a Turkish official that the organization was prepared to call off the visit even though Erdogan’s motorcade was already en route to the event.” The Turkish official intervened to de-escalate the confrontation outside Brookings to allow the speech to proceed.

Obama later said, “I think the approach that they [the Turkish government] have taken towards the press is one that could take Turkey down a path that is very troubling.”

The spectacle on Massachusetts Avenue brought home to Washington policy elites the Turkish president’s anti-democratic and increasingly personalized approach to politics, which will be familiar to readers of Al-Monitor’s Turkey Pulse.

Metin Gurcan reports this week on a speech by Erdogan at the War Colleges Command, the most prominent educational institution of the Turkish Armed Forces (TSK). “What raised eyebrows among the listeners,” Gurcan writes, “was Erdogan’s deviation from the established practice of treating the ‘commander in chief’ designation as symbolic, in practice allowing the prime minister and the general staff chief to handle security issues. For the first time, Erdogan used the term 'executive commander in chief' — in other words, a functioning commander in chief. Last year, Erdogan’s darts were aimed at the Gulenist movement. This year, the prime target was the West. He spoke of the hypocrisy of Western countries in combating terror. ‘No matter what we said, how much we warned, they didn’t listen. At the end, snakes started to bite them and the mines began to go off under their feet. Now you can see how those who chatter about democracy freedoms, rights and laws forget all about them when they get into trouble,’ he said.”

Semih Idiz writes that Erdogan unleashed on foreign diplomats covering the trial of two Cumhuriyet reporters by saying, “This is not your country. This is Turkey. You can only act within the consulate building or its borders; the rest is subject to permission.”

Idiz adds, “Erdogan was not happy to see US Vice President Joe Biden meet [Cumhuriyet editor Can] Dundar’s family during his visit to Turkey in January, especially after Biden reportedly told Dundar’s son that he had ‘a very brave father he must be proud of.’ Washington continues to stress that this case and other developments that undermine democracy in Turkey concern it deeply. The EU is being criticized for appearing lenient toward Turkey because it needs to cooperate with Ankara over the flood of refugees from Syria and other Middle Eastern countries. However, none of this has prevented EU diplomats from actively following certain cases in Turkey. The German ambassador and the consuls general of key EU countries as well as Australia, the United States and Canada were present at last week’s hearing in Istanbul over the case against Dundar and [Cumhuriyet journalist Erdem] Gul.”

Fehim Tastekin this week examines the declaration of “the Federal Democratic System of Rojava and Northern Syria, [which] would have a population of about 4 million and would incorporate Rojava's three cantons — Jazeera, Kobani and Afrin — as well as Tell Abyad and areas in northern Aleppo province that have been recaptured by Kurdish forces.”

Tastekin explains, “This structure is being worked out by the Kurdish political movement despite Turkey’s threats. The Kurds are leading the creation of popular assemblies in places where Kurds are in the majority and the creation of constituent assemblies (councils of elders) elsewhere. For example, the first congress of the Sheba region convened Jan. 28 and declared that it only recognizes the Syrian Democratic Forces (SDF) set up by the People's Protection Units (YPG), Arab and Turkmen groups, and the Democratic Syrian Assembly that was formed to send a delegation to the Geneva peace talks. Also, after ridding Tell Abyad of IS, the Kurds established a 113-member assembly and an executive council made up of seven Arabs, four Kurds, two Turkmens and one Armenian. … Despite its enmity toward the PYD, the Kurdish National Council, supported by Iraqi Kurdistan President Massoud Barzani, is pro-federalism for a model.”

Tastekin adds, “Kurds under PYD leadership are confident of their future in Kurdish-majority areas. The Kurds have long debated the concept of democratic autonomy formulated by Kurdistan Workers Party leader Abdullah Ocalan. But this is not a subject familiar to Syria's tribal Arabs. Kurdish sources say they have switched to federalism because many people could not understand what democratic autonomy and a cantonal system entail. The Kurds are an organized community that can handle the democratic autonomy institutions. They have acquired significant local governance experience over the past five years, starting with grass-roots committees in neighborhoods and villages. Women play a major role in Kurdish self-rule. Kurdish cantons have promoted a 40% quota for women's participation in public affairs. Can this be done in regions where women are denied public roles?...The Kurds are not insisting on including locations that the YPG won’t be able to control in the federation. That is why, if liberated from IS, Raqqa could form a separate federal entity. The same goes for El Bab, Menbic and Azaz, where Kurds are in the minority and YPG control is out of the question. They are aware that any attempt by the YPG to impose its rule over heavily Arab- and Turkmen-populated areas would be suicidal. There are already worrying signs of collective Arab tribal resistance to the Kurdish federal move. In those areas, the SDF made up of Arabs, Kurds and Turkmens promotes itself as the core of the future Syrian army and tries to prove that it is in charge. In short, the freshly introduced federal system will go through a series of serious tests because of international considerations, the attitude of the Syrian regime and the ethnic-sectarian fault lines of the region.”

Adnan Abu Amer explains how the March 11 decision by Hamas to close down the Al-Bakyat El-Salehat Society charity, which is affiliated with the Harakat al-Sabireen Movement headed by Shiite Hisham Salem, is a sign of another difficult patch in Hamas-Iran relations.

“The decision to shut down Al-Bakyat El-Salehat Society in Gaza,” Abu Amer writes, “might seem administrative and legal, but its political dimensions cannot be ignored as it coincides with the ebb and flow in relations between Hamas and Iran. The Ministry of Interior in Gaza officially informed the association of the decision three months after it was issued in December 2015. While Hamas is trying to patch things up with Iran, the latter does not seem satisfied, and perhaps Iran wants Hamas to settle its political options and side with it against Saudi Arabia. But it seems this is not what Hamas wants.”

Ali Hashem reports on a recent meeting in Tehran between a Hamas delegation and Gen. Qasem Soleimani, commander of the Quds Force, the Islamic Revolutionary Guard Corps’ foreign operations branch. Soleimani “advised the movement to keep its distance from all the chaos in the region and pledged Iran’s continued support, although [Hamas international relations officer Mousa] Abu Marzouk, in a leaked phone call, accused Iran of lying about its claims of supporting the movement. Marzouk’s accusation prompted Soleimani to say at the meeting, ‘Iran never lied, and we won’t lie. We sent several ships full of arms to the resistance, [but] some were intercepted. We won’t leave you alone. Whenever there’s a new technology that we can send, we won’t hesitate to. This is our duty. Whoever says the contrary should remember that this is all [taking place] before God’s eyes.’ An Iranian military source told Al-Monitor on condition of anonymity that Abu Marzouk has tried to contact Tehran to arrange a visit for the Hamas delegation set to travel from Cairo to Doha, but the Iranians have responded in the negative — not to the delegation, however, but to Abu Marzouk. ‘If he’s sure he wants to come to Tehran, then he has to apologize,’ the Iranian source said.”