Are Western diplomats the latest targets of Erdogan’s fury? 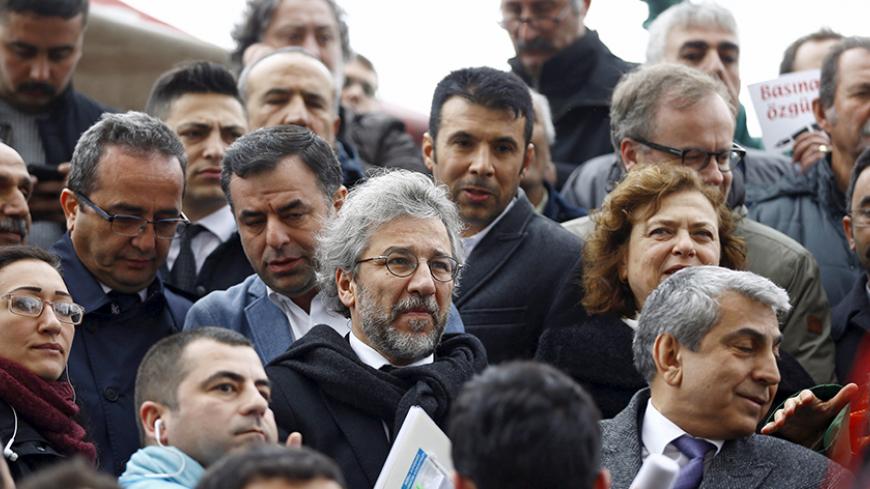 Can Dundar, editor-in-chief of Cumhuriyet, (C) arrives surrounded by people at the Justice Palace in Istanbul, Turkey, March 25, 2016. - REUTERS/Osman Orsal

President Recep Tayyip Erdogan is not known for his fondness of diplomats, diplomatic niceties or, for that matter, diplomacy itself. It doesn’t matter if the diplomats are Turkish or foreign. He has made his distaste for them known.

While he was still prime minister, Erdogan gave Turkey’s ambassador in Berlin a public dressing down in 2006 over instructions from the ministry to only accept photographs without Islamic headscarves from women for official documents. He was applauded by expatriate Turkish supporters there, undermining the prestige of the ambassador in the country where he was serving.

Erdogan chastised retired Turkish diplomats in 2009 for criticizing his outburst against Israeli President Shimon Peres at Davos, calling them “mon cher” and suggesting they never supported the good things their country did. “Mon cher” (French for “my dear”) is an affectionate greeting Turkish diplomats once used for each other. Today, it is used derogatively toward some Turkish diplomats to suggest their reputed effete and affected nature.

This time it was Western diplomats in Turkey who incurred Erdogan’s wrath. Their sin was attending the trial of prominent journalists Can Dundar and Erdem Gul. Both face espionage charges for reporting on illegal arms shipments to anti-regime forces in Syria in 2014 by Turkey’s intelligence service.

The story first appeared last May in Cumhuriyet, whose editor is Dundar, while Gul is its Ankara bureau chief. Erdogan promised at the time that Dundar would pay dearly for his actions, and Dundar and Gul were subsequently arrested and imprisoned.

The Constitutional Court, acting on a petition by them, ruled in February that their rights had been violated and they had merely done their jobs as journalists. Their release infuriated Erdogan. He said he did not respect the high court’s ruling and would not recognize it, revealing the extent to which he has personalized this case. The attention the case received in the West only fueled his fury.

Erdogan was not happy to see US Vice President Joe Biden meet Dundar’s family during his visit to Turkey in January, especially after Biden reportedly told Dundar’s son that he had “a very brave father he must be proud of.”

Washington continues to stress that this case and other developments that undermine democracy in Turkey concern it deeply. The EU is being criticized for appearing lenient toward Turkey because it needs to cooperate with Ankara over the flood of refugees from Syria and other Middle Eastern countries. However, none of this has prevented EU diplomats from actively following certain cases in Turkey. The German ambassador and the consuls general of key EU countries as well as Australia, the United States and Canada were present at last week’s hearing in Istanbul over the case against Dundar and Gul.

Erdogan was livid after some of the diplomats posted a collective selfie on social media platforms. “Who are you? What business do you have there?” a visibly angry Erdogan fumed, targeting the diplomats during an address at an Istanbul convention for Turkish entrepreneurs. “This is not your country. This is Turkey. You can only act within the consulate building or its borders; the rest is subject to permission,” he said.

While Erdogan's words sat well with his Islamist supporters and in nationalist circles, retired Turkish diplomats were unanimous in disagreeing with his assessment.

Nuzhet Kandemir, a former undersecretary for the Foreign Ministry whose ambassadorial posts included Baghdad and Washington before he retired in 1998 to enter politics, said the diplomats targeted by Erdogan had acted within their duties.

“It is the job of diplomats to follow political developments in the countries they serve in and report them back. This is part of their job under the Vienna Convention on Diplomatic Relations,” Kandemir told Al-Monitor. “Once a state accepts a diplomat then it recognizes that diplomat’s right to act according to the privileges provided to him. What President Erdogan says is not valid,” Kandemir went on, adding that Erdogan’s remarks are demeaning for Turkey.

“Unfortunately, Turkey is pursuing a highly personalized foreign policy whose beginning or end is not clear. This has become the norm for Turkey, even if it is not normal for the rest of the world,” he concluded.

That Erdogan was walking on thin ice did not prevent the Ministry of Foreign Affairs in Ankara from acting to make its dissatisfaction known to countries whose diplomats attended the Dundar and Gul trial. Kandemir said the ministry knows the rules of diplomacy, but its hands are tied “because the order is from above.”

A Western diplomat who wished to remain anonymous due to his sensitive position told Al-Monitor, “The appropriate answer had been given” to Turkey. He did not elaborate.

However, State Department spokesman John Kirby gave a clear picture of what this “appropriate answer” was. Kirby said during his daily press briefing in Washington on March 29 that the State Department stands by its diplomat who followed the trial.

“And that’s completely in keeping with standard diplomatic practice — to observe and report on political, judicial and other developments in host countries. This was not the first time, but it darn sure won’t be the last time that we observe these kinds of judicial proceedings,” Kirby said, clearly employing a defiant tone to match Erdogan's.

The opposition media in Turkey has also been pointing to an ironic twist in this affair. When Erdogan was convicted to 10 months in prison in 1998, while he was mayor of Istanbul, for reciting a poem considered to be incitement against the secular state, he received support from the US consul general and other Western diplomats.

Visiting Erdogan in his office, US Consul General Carolyn Huggins said, “Prison sentences for elected politicians for what they have said shakes confidence in Turkish democracy.”

Erdogan, who did not complain about the support he got from Western diplomats then, conveniently prefers to overlook the matter today.