The (de-)evolution of Turkey's Foreign Ministry

Career diplomats and Foreign Ministry bureaucrats have been shoved aside and demoralized by the conduct of Turkey's foreign policy under Justice and Development Party governments. 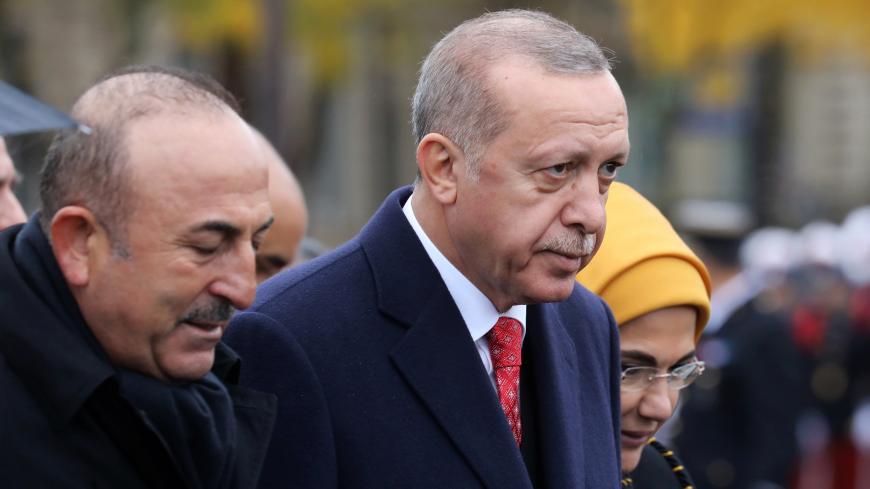 After two decades, Turkey’s diplomats are used to becoming targets of President Recep Tayyip Erdogan’s disdain. Often accused of being unpatriotic or faint-hearted, the country’s diplomatic elite has seen their power – not to mention their prestige – diminish under the acid-tongue president and his cronies.

The last punch came on Jan. 14 at an off-the-record parliamentarian event, where Turkish Foreign Minister Mevlut Cavusoglu declared that politically-appointed diplomats –something the Foreign Ministry grudgingly accepted after long resistance– proved to be more successful than career diplomats.

“Ambassadors from outside the diplomatic profession who were appointed by the president are the most successful,” Cavusoglu said in response to complaints by opposition party members that career diplomats were not being promoted to ambassador positions.

“When there is an ambassador to be appointed to a foreign post, we choose the ones most appropriate for the country,” Cavusoglu asserted. “We don't pick arbitrarily.”

Aydin Adnan Sezgin, a former ambassador and currently a Good Party (IP) parliamentarian, was at the closed-door session and expressed surprise to the parliament about the minister’s words. He questioned Cavusoglu’s criteria for success.

Traditionally, advancement within the Foreign Ministry has been a purview of career-track diplomats. Despite opposition from other political parties and experts, the AKP changed the ministry's regulations in 2013 to allow people from outside the ministry to be appointed ambassadors. Some former diplomats have referred to the decision as a coup. Currently, 13% of all ambassadors are political appointees.

The AKP defends this system as having been adopted from the United States to increase efficiency and to adjust to a fast-paced world. However, the Turkish system ignored that in the United States presidential nominees for ambassadorships must be confirmed by the Senate, thus curtailing total arbitrariness in appointments. In Turkey, on the other hand, the president can approve almost anyone as an ambassador.

Cavusoglu’s statements about political appointees have understandably affected the morale of current career diplomats and upset retired personnel. But Cavusoglu refrained from apology, clarification and backtracking -mimicking the disdainful attitude of President Erdogan toward diplomats.

Erdogan's populist stridency estranged the Foreign Ministry from the AKP in the early 2000s. In various public speeches, Erdogan kept referring to the diplomats as “mon cher” (my dear in French)– a mimicry that diplomats themselves use in self-mockery to indicate their Westernized, polyglot and cosmopolitan lifestyle. But the satirical expression has been turned to an expression of derision by Erdogan, who made no secret of the fact that he considered the decisions of “mon cher”s unwise.

Perhaps it is therefore not surprising that the ebbs and flows of Turkish foreign relations and their perpetual state of crisis have baffled analysts and journalists. To Aydin Selcen, a former diplomat, it is simply “chaotic foreign policy.”

Meanwhile, pro-government media frequently boast that the AKP years have led to a stronger and more diverse Foreign Ministry, referring to Turkey's high number of female ambassadors — 66, with 33 representing the country abroad. Under the AKP, the number of diplomatic missions around the world increased from 163 in 2002 to 242 in 2018, making Turkey fifth in the world for the number of diplomats abroad. In 2017, Turkey ranked as the world's leader in foreign aid. Based on these numbers, one might expect to hear of remarkable successes for the Foreign Ministry, but this is not the case.

After Cavusoglu’s remarks, Al-Monitor spoke with a group of senior and mid-level career diplomats, some of them retired or having resigned, to understand how the ministry has changed. All of them, who requested anonymity, confirmed that the ministry has been sidelined as the president's executive powers have expanded exponentially. Foreign Ministry personnel of all ranks are beside themselves watching the failures of Turkish foreign policy unfold firsthand.

“We are successful if we can prevent the failure from leaking out of our own office,” one mid-level career diplomat said. “Our job has exclusively become damage control, as Turkey is operating on red alert full time.”

First, the AKP developed an aggressive policy approach different from the ministry's usual functioning. When bureaucrats resisted new approaches, the administration got creative, developing new agencies or taking away existing agencies from the umbrella of the Foreign Ministry. The Office of Public Diplomacy, which was founded by career-diplomat Namik Tan in 2009 under the roof of the Foreign Ministry, was moved to the Prime Ministry the next year and the role of the coordinator was given to Ibrahim Kalin, president’s top foreign policy adviser. The administration also expanded the powers and reach of some existing agencies, such as the Turkish Cooperation and Coordination Agency (TIKA) and the Religious Affairs Directorate (Diyanet). Diplomats have complained about the duality of the system.

A senior diplomat told Al-Monitor, “The AKP now complains about a parallel state system [referring to the Gulen movement's infiltration of state agencies], but for years [their actions] encouraged that to happen at all levels. For example, while serving abroad I learned that AKP parliamentarians were visiting the city I was posted in, but I was not told about their arrival, because another agency greeted and hosted them. These are simple tasks, but they can destroy a country’s image abroad.”

The AKP created the new agencies and expanded others' authority into foreign affairs for a variety of reasons, one of them being to support the rogue arrangements it sometimes makes. A retired diplomat, Murat Ozcelik, revealed for example that in February 2006, when Hamas leader Khaled Meshaal and members of his movement paid a controversial visit to Ankara, the Foreign Ministry only learned about the visit the night before it was to take place and couldn't for policy reasons host the delegation. Instead, the AKP had taken charge of it. Others have confirmed Ozcelik’s assertion and how the leadership in many cases keeps Foreign Ministry personnel in the dark until the last minute.

Second, like other bureaucratic agencies, the ministry has gradually fallen victim to nepotism in hiring. Once upon a time, diplomats were rigorously tested in foreign languages, Turkish history and law and international law, among other subjects. The required exam was considered one of the most difficult in the civil service.

After the failed coup attempt in July 2016, hundreds of employees were dismissed from the Foreign Ministry. Former ambassador Gurcan Balik, who also served under former President Abdullah Gul and former Prime Minister Ahmet Davutoglu, remains in jail for allegedly belonging to the Gulenist movement. The previous rules on eligibility for taking the ministry exams were eased.

Third, Erdogan’s personality type resulted in micromanagement at all levels of foreign affairs. Rather than following established protocols, Erdogan prefers to take shortcuts and personalize relationships. This undercuts discipline and the Foreign Ministry's functioning. Although this kind of personal style might work well with individual leaders, like the current US president, it does not benefit institutional arrangements, such as Turkish-EU relations.

Often, this resulted in institutionalized zig-zagging. The AKP upgraded Turkey’s Secretariat-General of European Union Affairs to a ministry in 2011, only to downgrade and affiliate it as a general-directorate to the Foreign Ministry seven years later – during the shift to the presidential system. Similarly, the Office of Public Diplomacy was moved from the prime minister's purview to the president's. Although the office is supposed to be accessible to foreign-language speakers so it can present a good face for the country, its web page is now available in Turkish only and has not been updated for some time. The section for international media contacts has not been updated since 2014.

One recently retired ambassador told Al-Monitor, “There's no need for any of these agencies anymore, other than having separate items for spending in the budget. They may also be used for staffing for some AKP cronies, [but] these agencies haven't been accountable to the Turkish parliament or public, and what purposes they have served remains a mystery. The public diplomacy office, for instance, generated commotion early on, but now, who knows what they do?”

Timid statements made by Foreign Ministry personnel in response to Al-Monitor inquiries suggest that the three factors identified here are not an exhaustive list or minor aberrations affecting the ministry's functioning. Rather, they indicate that the Foreign Ministry, along with other agencies, is suffocating under Erdoganism.