Operation Peace Spring undeniably revealed what was long feared: Turkey’s inability to explain itself to the world because of structural damage to the traditional workings of the Foreign Ministry, alienated skilled career diplomats and new agencies that are active in foreign policy. 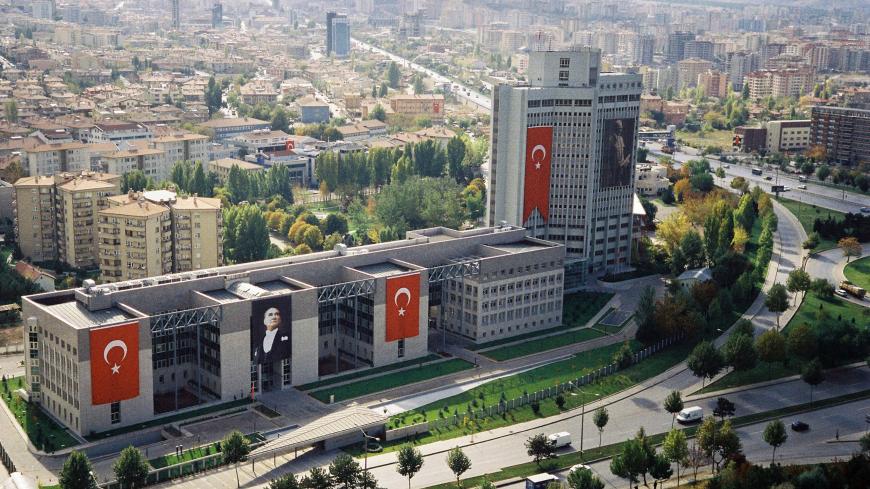 The Turkish Foreign Ministry is seen in Ankara, Turkey, in a photo uploaded Feb. 12, 2019. - Facebook/TurkishForeignMinistry

Among the issues the Turkish and US presidents discussed in their Nov. 13 meeting in Washington was Operation Peace Spring. Turkey has taken a public relations beating over its latest incursion into Syria, and Ankara quietly agrees with the rest of the world that it has utterly failed in diplomacy on all fronts. Not even Northern Cyprus or Palestine backed Turkey’s operation and Ankara knows well its public diplomacy campaign against the People’s Protection Units (YPG) and the Syrian Defense Forces (SDF) has failed utterly. One of the Turkey’s worst nightmares was the internationalization of the Kurdish conflict, but all of Ankara's efforts have proved counterproductive on this issue as well.

Since Oct. 16, opposition parties’ main criticism against the government has focused on President Donald Trump’s notorious letter with an attachment from SDF commander Mazloum Kobane.

Even the way Ankara reacted to the leak of the letter was a fiasco. Initially, it was the quintessential Justice and Development Party (AKP) reaction to all foreign matters unpleasant: to proclaim “it doesn’t exist in our eyes.” This came along with the claim that officials threw the letter in the trash. Yet in an Oct. 24 interview, President Recep Tayyip Erdogan openly said he would be taking the letter back to Trump on Nov 13. Throwing an official letter in the trash is as meaningless as taking it back to its author. There are proper diplomatic mechanisms that could have been utilized to deal with such a letter but they were not put into place. Why not? In addition, neither of the cease-fire agreements Ankara signed with Russia or the United States acknowledge the YPG as a terrorist organization — which is one of the core justifications for Erdogan's initiation of this operation. Does the Turkish signature on these documents mean an official recognition of the YPG as a legitimate entity? These are basic questions Ankara would rather not hear at all. Failed diplomatic efforts generate hefty bills beyond the tarnished global image of a country.

Al-Monitor asked what lies behind such a haphazard public diplomacy and foreign policy interactions in conversations with Turkish and foreign diplomats, senior bureaucrats from defense and intelligence agencies as well as scholars of international relations. Our findings can be summarized in three categories.

The first explanation is focused on the damage that state agencies involved in foreign affairs suffered with the transition into the presidential system. One retired diplomat said, “When it is not clear who is in charge of a specific task, everyone looks for one to blame for the failure. In the current Turkish system, there is the [Foreign Ministry], then the public diplomacy directorate, which is now under the Directorate of Communications, and of course there is parliamentary diplomacy. The last one means that parliamentarians, and even soldiers and other bureaucrats who are working with international organizations, such as NATO, OSCE [Organization for Security and Cooperation in Europe] and the European Council are also our representation abroad. If they receive proper briefing from Ankara, they can explain Turkish missions properly. On all fronts we observe a chaos in the transition process to the presidential system, and I think with this operation the dire situation has become undeniably visible.”

Erdogan has been warning about a large-scale operation for over a year. Were there proper preemptive diplomatic preparations? It would not be an exaggeration to say the international criticism against the operation took Turkish diplomatic missions by surprise. Once Turkey saw the strong disapproval on a global level, various academic institutions that work on public diplomacy reacted by initiating a campaign using detailed but insufficient infographics.

The transition process has tarnished the structure and the organization of the Foreign Ministry and other agencies that are responsible for foreign affairs.

The second explanation can be found in the continuous distaste AKP holds for career diplomats, who have been ridiculed as “mon chers” for 17 years now. The French term "mon cher" — "my dear" in English — has been used to label diplomats as elitists in Turkey. The AKP government has changed the system of accreditation and has been handing out ambassadorial posts to people who are close to the presidential palace but who are not career diplomats.

A senior official from the defense and intelligence bureaucracy said, “Traditionally numbers in [the Foreign Ministry] have been small, because their goal was to have all of their career officials retire as ambassadors. These posts did not require merit, it was not a pyramid organization but one designed like a pipe. It was an elite club. AKP tried to change this but it backfired as Gulen movement members took over crucial positions. Since the failed coup attempt, most of the Gulen-linked people have been fired and then the numbers fell again. So [the Foreign Ministry] to an extent lacks enough personnel. This contributed to another layer of arrogance among the existing officials. They think it is a good opportunity to show the government their worth now.”

Several AKP officials concurred with this statement and added that they view most diplomats as arrogant because they refuse to work for the government with full dedication. A European diplomat confirmed this, adding, “For the first time in my almost 30-year career, I had a Turkish diplomat confide in me ‘I do not agree with it but this is Ankara’s statement.’ I think there is Turkey fatigue on diplomatic circles globally and the AKP or Erdogan fatigue among senior Turkish diplomats. They know you cannot win with a losing hand.”

The third reason, rarely spoken aloud, is the increasing prominence of the Turkish National Intelligence Agency (MIT) along with its use of Religious Affairs Directorate (Diyanet) personnel. MIT and Diyanet involvement in foreign policy is rather novel in Turkish foreign affairs. In the words of Aydin Sezgin, an opposition parliamentarian, the government has been trying to do diplomacy “without diplomats.”

Over the last decade, the Diyanet and the MIT have been among Erdogan’s personal favorites, with ever-expanding budgets and numbers of personnel. Erdogan finds it easy to communicate with them as the organizations have been restructured to his ideals. A senior member of the intelligence community told Al-Monitor that MIT Director Hakan Fidan “never says no to Erdogan. Whatever Erdogan needs he will find a way to deliver. Other agencies drag their feet. His hard work is of course rewarded properly. Just take a look at the amazing new headquarters the MIT moved in recently. On top of that MIT personnel are not alien to their own culture, like most of [the Foreign Ministry] ranks. The MIT has a compulsory service in eastern provinces, as well as in foreign posts. Therefore agents are better equipped to provide cogent explanations in their cases compared with the memos delivered by [the Foreign Ministry's] career diplomats.” Several senior Ankara bureaucrats and parliamentarians complained that Foreign Ministry analysis sent from different capitals were mainly "cut and paste" jobs of Wikipedia and the CIA World Factbook and were not sufficient for them. The MIT has been heavily involved in the Astana process involving Turkey, Russia and Iran on Syria as well as all three operations in Syria — Euphrates Shield, Olive Branch and Peace Spring. However, the MIT's job is neither diplomacy nor the making of foreign policy.

A retired diplomat complained, “The AKP government spends more time writing the details of Friday sermons it delivers to the imams in European cities than in providing guidelines for their embassies in the EU.” Both the Diyanet and the MIT find access to top officials in Ankara much faster than Foreign Ministry personnel.

For years the AKP government has publicly ridiculed the Foreign Ministry, changed its structure and promotion system, and, perhaps worst of it all, kept the agency in the dark with regard to crucial strategic planning. Erdogan has also invested heavily in the public diplomacy directorate, as well as the MIT and the Diyanet, but their ability to chart the stormy waters of diplomacy has proved less than acceptable. Erdogan’s preference has been one-on-one relationships with leaders, bypassing regional or international organizations wherever possible. This sort of leadership helps foreign policy vulnerabilities to be presented, through angry outbursts, as domestic victories in the short term. However, when the times are rough, Turkey is left isolated. Particularly, the Arab League’s open and loud opposition to Operation Peace Spring was a blow to Erdogan’s age-old anti-Western rhetoric. Most of the Muslim majority countries were against the operation and none was willing to stand by Erdogan. This destroyed the pro-AKP media’s usual defense — the “because we are Muslim” argument — against criticism.

“It is time for self-reflection in Ankara,” said an Islamist historian who asked not be named. “Calling everyone else arrogant is not right way to achieve diplomatic success. Without diplomatic success, other achievements [military, economic] are being discounted. What we may be winning with the blood of our martyred soldiers’ we are losing at the negotiation table due to the insistence of inadequate leaders to play diplomat.”