Erdogan vs. the world

With Recep Tayyip Erdogan closer than ever to total authority, the world is going to have to deal with an increasingly confrontational Turkish president. 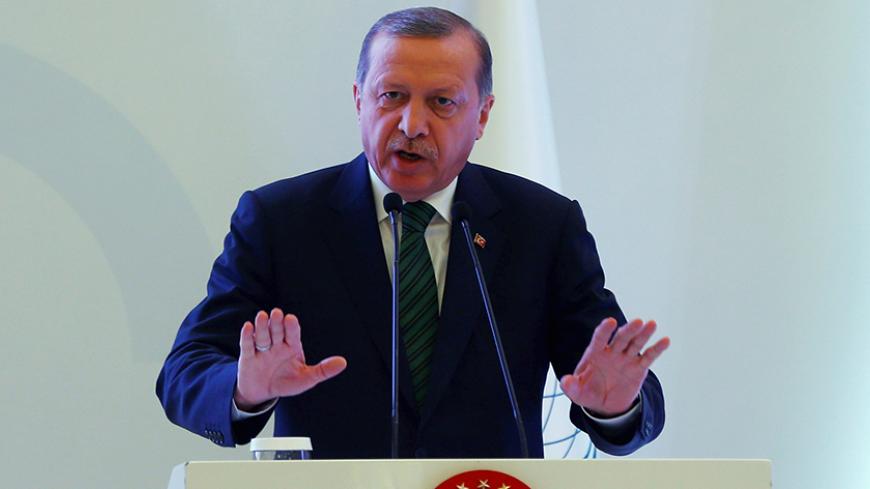 Turkish President Recep Tayyip Erdogan makes a speech during a conference in Istanbul, May 17, 2016. - REUTERS/Murad Sezer

President Recep Tayyip Erdogan's ouster of Prime Minister Ahmet Davutoglu to clear his own path to absolute power has left many wondering what effect the move will have on Turkey's foreign policy orientation and its relations with the West in particular.

Given the way Erdogan has been ratcheting up his angry anti-Western rhetoric, some fear that Ankara's ties with the United States and Europe will remain strained for the foreseeable future over a number of seemingly irreconcilable issues.

Erdogan's finger-wagging approach to the West is what endears him to Turkey's conservative Islamic masses. Faced with a need for political support as he pushes for a new constitution at home that will give him the power he currently lacks as Turkey's sole leader, Erdogan is not likely to alter his populist line anytime soon.

"On those occasions when it is necessary for me to stand up defiantly to the whole world, I do this knowing that I have the support of the Turkish public behind me," he told a crowd in the eastern city of Malatya recently, adding, "The eyes of the Islamic world are on Turkey." His recent speeches and statements indicate that what he ultimately desires is a unified Islamic world with a leadership able to confront the West from a position of strength.

Turkey's relations with Europe were in fact moving along a more positive trajectory under Davutoglu following the refugee agreement he negotiated with the European Union (EU) in March. The deal also includes the right to visa-free travel in Europe for Turks.

That agreement now faces an uncertain future because of Erdogan. Enraged by one of the EU's preconditions for visa-free travel, namely that Turkey reduce the legal scope of acts defined as terrorism, Erdogan said Ankara would refuse to do so.

The EU wants the law changed so that ordinary citizens, journalists and academics cannot be arrested on the grounds of "aiding terrorism" simply for airing their views.

During an address in Istanbul, Erdogan suggested that if Europe is not happy with his position on this topic, then Ankara is prepared "to go its own way, and let Europe go its own way. His remarks were taken in Europe to suggest that he could dump the whole refugee deal if necessary.

Erdogan was speaking a day after he toppled Davutoglu, and his words were widely taken to express dissatisfaction with the refugee agreement that the prime minister had negotiated with the EU. Many analysts argue that Davutoglu's high-profile negotiations with the EU, in which he seemed to have an independent political will, was the final straw for Erdogan.

Erdogan is also angry over what he claims is Europe's lack of compassion for Syrian refugees. During an address in the northwestern town of Kocaeli last week, he blasted the West for showing sensitivity to gay rights and the welfare of animals while disregarding desperate Syrian women and children.

"Shame on the slavery-and-colonial-era mindsets that set their eyes first on the money in the wallets of incoming refugees and the jewelry on their arms and necks," he said in inflammatory language. His was referring to Denmark, which announced some months ago that it would confiscate the money and valuables of refugees to offset their cost to the public.

Elmas Topcu, an analyst for opposition news website Diken, is not hopeful that Turkish-EU ties will improve in the near future. She blames Erdogan and his power struggle with Europe, arguing, "Brussels and Berlin have had their fill of threatening and undiplomatic language from Erdogan and his advisers, and [they] are concerned now that Davutoglu, who knows English and German and can at least be considered an interlocutor when compared to Erdogan, is going."

Erdogan also accuses the West of having double standards because it is not only lax in backing Turkey's war against the outlawed Kurdistan Workers Party (PKK), but also actively supports PKK offshoots like the People's Protection Units (YPG) in Syria.

Ankara is particularly annoyed with Washington's refusal to declare the YPG a terrorist group as it has done with the PKK, and over the US alliance with the Syrian Kurdish group against the Islamic State.

Referring to the PKK truck laden with 15 tons of explosives that exploded prematurely in an open field near Diyarbakir last week, killing 16 villagers, Erdogan said, "None of the Western countries, which not only allow [the PKK] to operate freely on their territory under different names but also provide support to these groups, had anything to say about this sad incident."

He said the West speaks out when terrorists attack Paris or Brussels, but remains silent when these attacks hit Lahore, Ankara, Istanbul or Diyarbakir. "How far can you take such a double standard?" Erdogan asked accusingly.

But how far can Erdogan take his own bellicose line against the West, when it is clear that Turkey, the United States and Europe are intertwined on so many political, military and economic levels?

Retired Ambassador Nuzhet Kandemir, whose postings include Washington and Baghdad and who also served as undersecretary at the Ministry of Foreign Affairs, believes it is not possible for Ankara's ties with Europe and the United States to improve under these conditions. He told Al-Monitor, "Yet past experience has shown that what is said and what is done by this party do not always mesh. Even if tensions continue, a severance of ties with the West is highly unlikely."

He was referring to the ruling Justice and Development Party, which will be under Erdogan's tutelage even more now that Davutoglu is gone.

"They will continue to push for Turkey to get closer to the East, but the need to be realistic will ensure that they always maintain vital links with the West," Kandemir added.

Clearly the West cannot afford a cut in ties with Turkey either, and it will have little choice for the sake of pragmatic considerations but to accept Erdogan for what he is. Turkey's foreing policy under Erdogan and its ties with the West in particular, nevertheless, appear set to remain confrontational.