After Erdogan's win, what's next for Turkey's foreign policy?

Despite Turkish President Recep Tayyip Erdogan’s anti-Western rhetoric and signs pointing to its continuing, Western leaders appear to accept that they will nonetheless simply have to work with him. 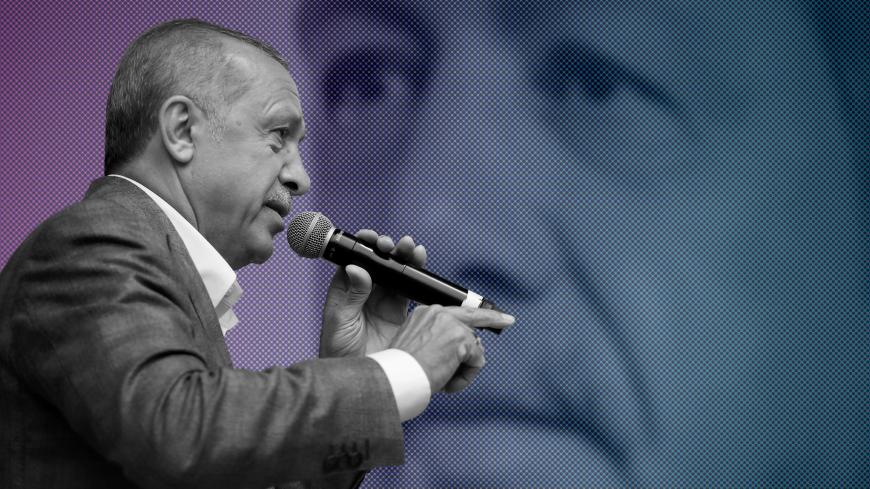 Turkey's relations with the West have never been as tense and turbulent as under President Recep Tayyip Erdogan. In addition, few governments in the Middle East appear to be enamored with Ankara’s interference in the region's affairs. Following Erdogan's recent electoral victory, however, it is ties with the West that will determine much, especially now that Erdogan is effectively Turkey’s sole ruler following implementation of constitutional amendments adopted in 2017.

Erdogan’s election victory also shows that his abrasive and offensive tone in conducting relations with the West has the support of a significant number of Turks in Turkey and abroad. This has led many to assume that Ankara’s foreign policy orientation under Erdogan’s executive presidency will amount to more of the same. That might be the case, but the underlying philosophy will, however, be different.

Turkey's policy had previously been based on the idealistic notion of “zero problems with neighbors,” formulated by Ahmet Davutoglu, the now discredited former prime minister. After replacing Davutoglu in July 2016, Binali Yildirim rehashed this approach, asserting that he would work to “increase the number of Turkey’s friends and reduce the number of its enemies.”

Both Davutoglu and Yildirim’s formulations were not original, of course, being no more than derivatives of the “peace at home, peace abroad” dictum of Mustafa Kemal Ataturk, founder of the Turkish Republic. Their formulations failed to produce the desired effects, as Turkey’s problems with its neighbors increased and the number of its friends fell sharply, due mainly to Erdogan’s singular and harsh approach to international relations.

Erdogan’s electoral manifesto, presented in May, made it clear that he would abandon the idealistic notions expounded by Davutoglu and Yildirim if elected Turkey’s first executive president. His foreign policy, Erdogan indicated, would be based on realism driven by his understanding of the global situation and built essentially on the understanding that “the world is no longer the unipolar world of the 1990s.”

Also grounding this approach is the understanding that Turkey’s vital national security concerns trump all other considerations because of the “reactionary and exclusionary actions of states.” In short, Erdogan’s foreign policy vision is based on the idea of building a militarily strong Turkey that can stand up to its enemies and protect itself against all external threats while also becoming the key power in its region.

In this regard, Erdogan points to Operation Euphrates Shield and Operation Olive Branch, Turkey’s military campaigns in Syria against the US-backed Syrian Kurdish People’s Protection Units (YPG), as well as its incursions into Iraq against the outlawed Kurdistan Workers Party (PKK).

While paying lip service to the idea that Turkey's bid to join the European Union will remain on course, Erdogan also made it clear in his manifesto that he considers “the increase in fanaticism, cultural racism and enmity toward Islam in the West” to be one of the central threats facing Turkey. This ties in to his belief that the West is harboring members of terrorist groups out to undermine and destroy Turkey. These groups include the followers of Fethullah Gulen, the self-exiled Turkish preacher who resides in Pennsylvania and whom Ankara accuses of masterminding the failed coup attempt against Erdogan and his Justice and Development Party (AKP) in 2016; the PKK, whose supporters Ankara claims enjoy a free hand in Europe; and the Syrian YPG, which has backing from Washington.

This narrative is supported by the ultra-right Nationalist Movement Party (MHP), Erdogan’s ally in the elections that also performed well at the ballot box and will become the AKP’s coalition partner in parliament.

According to Beril Dedeoglu, who served briefly as minister for EU affairs under Davutoglu in 2015, combating terrorism will remain central to Turkey’s foreign policy under Erdogan. “Turkey’s relations with just about every country is determined by this subject,” Dedeoglu wrote in her column for the pro-government Star.

Sinan Ulgen, who heads the Istanbul-based EDAM Centre for Economics and Foreign Policy Studies and is a visiting scholar at Carnegie Europe in Brussels, is pessimistic about Turkey’s ties to the West under Erdogan’s executive presidency.

Pointing to the AKP’s partnership with the MHP, a party deeply skeptical of Turkey’s EU bid, Ulgen believes Ankara’s foreign policy will take a “turn to the right.” This will make Ankara a “more belligerent and intransigent ally” for the West. In Foreign Policy, Ulgen wrote, “Under these circumstances, Turkish-EU relations could become purely transactional, covering only a few areas of mutual interest such as the refugee deal.”

Pro-Western opponents of Erdogan bemoan Turkey’s drift away from the West, but his supporters do not believe it is such a bad thing under the prevailing circumstances.

Murat Yesiltas from the government-funded SETA Foundation for Political, Economic and Social Research in Ankara argues that Turkey’s traditional, Western-oriented foreign policy is a thing of the past. Ankara’s relations with the world under Erdogan will be driven by “neo-realism,” Yesiltas stated in his analysis of Erdogan’s electoral manifesto.

In reference to Erdogan’s position that the United States is no longer the only global power calling the shots, Yesiltas wrote that Russia and other powers are now central to Erdogan’s approach to foreign policy. “A Turkey that not only works with its Western allies but also with Russia, Iran and China is an inseparable part of this understanding of neo-realism,” Yesiltas argued.

One of the main criticisms of Erdogan’s pro-Western opponents is that he is driving Turkey away from Western democratic and humanistic values. Like Erdogan, his supporters, however, argue that the West is undermining its own values with its racism, xenophobia and Islamophobia. To prove their point they refer to the current debate in Europe over migrants from the East and contrast it with the large number of refugees Turkey has accepted, mainly from Syria.

They also hit back by saying that Turkey’s approach to foreign policy is grounded in moral values, which they argue aim to support the downtrodden and oppressed, be they Palestinians suffering Israeli repression or the Rohingya Muslims in Myanmar. Ayse Sozen Usluer, who heads Erdogan’s foreign policy division at the office of the presidency, underlined this point on election night.

“Our foreign policy is built on the values of justice, dignity and freedom,” Usluer said in a speech at the AKP’s Election Coordination Center in Berlin after it became clear that Erdogan had won.

Despite Erdogan’s anti-Western rhetoric, which he is unlikely to abandon, key Western leaders did not hold back from congratulating him on his re-election. That the elections were conducted in a less than fair environment appeared not to be of particular consequence for most of them, either. It signifies acknowledgment that they will have to work with Erdogan regardless of their personal feelings about him due to Turkey’s continuing and some argue growing strategic importance in a troubled region of the world.

Meanwhile, rumor has it that Erdogan’s chief foreign policy adviser, Ibrahim Kalin, might be replacing the incumbent foreign minister, Mevlut Cavusoglu, who proved to be as abrasive as Erdogan in his international dealings. Kalin, on the other hand, is more soft-spoken. His becoming foreign minister could signify a more delicate and diplomatic tone in dealings with the West.

Whatever the case might be, it looks like Western leaders will have their jobs cut out for them in trying to work with Erdogan to address issues of vital importance for the United States and Europe. Erdogan is unlikely to make life easy for them.