Despite some new messages from Turkish Foreign Minister Ahmet Davutoglu, a "reset" of Turkey’s foreign policy seems a stretch. 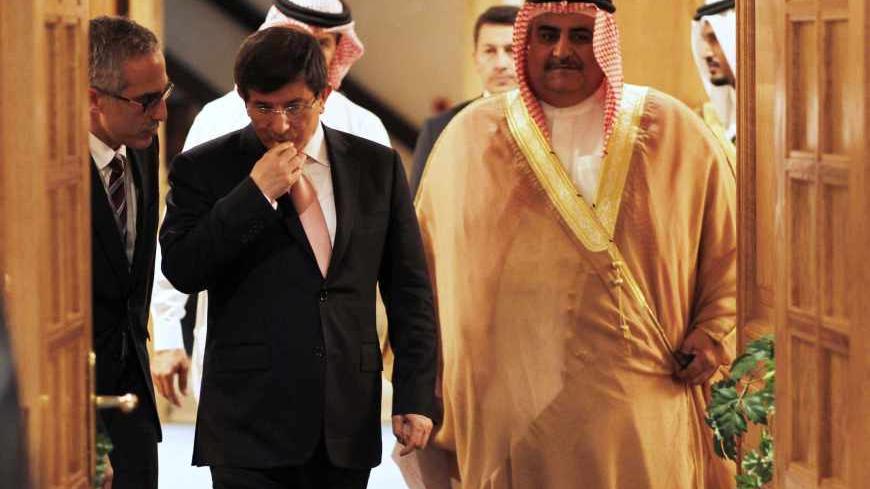 A tweet on Aug. 19 by Ibrahim Kalin, Prime Minister Recep Tayyip Erdogan’s chief foreign policy adviser and deputy undersecretary of the prime minister’s office, was hotly debated in Turkey. In the tweet he said, "It is not accurate to say that Turkey is isolated in the Middle East. But if this [is] meant as criticism, then it must be said that it is a precious loneliness."

These words amounted to tacit admission of how, after May 2009, the duo of Erdogan and Foreign Minister Ahmet Davutoglu dragged Turkey into isolation in the region and in the world, by trying to radically reshape the country’s foreign policy. The remarks reflected an effort to justify that loneliness by attributing it to a compendium of values and morality.

Then, Kalin must have felt the need to explain the "precious loneliness" concept that put him and the government in such a tough spot. He did that in an interview with pro-government daily Star on Aug. 26. In the interview, he responded to a remark that "Turkey appears to be isolated" by saying, "Sometimes you have to defend some values all by yourself. If that is to be defined as loneliness, then it is a precious loneliness. … That is value-based loneliness and therefore a meritorious position."

How was this so-called "precious loneliness" manifesting itself? Let’s recall briefly.

As of the end of October, the only actor Turkey was not in conflict with, directly or indirectly, was the Kurdistan Regional Government (KRG) in Iraq. There was an additional escalation of tension in relations with Iran, which became a covert crisis because of Turkey’s persistent policy of regime change in Syria in employing all possible efforts short of sending its army in.

Relations with Baghdad had begun to erode after Turkey intervened on the side of Sunnis against Shiite Prime Minister Nouri al-Maliki in Iraq after 2009 elections. That eventually became a crisis after Ankara offered refuge to Sunni Iraqi Vice President Tariq al-Hashemi. All these were capped by Baghdad’s perception of the bilateral energy agreements Turkey reached with the KRG as a threat to Iraq’s territorial integrity.

Syrian policy is already well-known. There have been serious accusations that the Justice and Development (AKP) government is supporting international jihadists fighting the regime in Syria and that it is allowing these al-Qaeda-affiliated groups to make use of Turkish territory.

Normalization steps to end the crisis in relations with Israel have as yet not yielded anything.

Ankara’s reaction to the coup in Egypt was far beyond what could be expected from a democratic and secular country. The AKP and its supporters fully identified with Ikhwan (Muslim Brotherhood), causing Ankara’s ties with the new administration in Cairo to suffer. This pro-Ikhwan attitude also poisoned Ankara’s relations with the Gulf countries.

Before his famous “zero problems policy” collapsed, Davutoglu boasted in a lecture at Harvard University on Sept. 30, 2010, that the "Turkey that once believed it was encircled by enemies now has excellent relations with all its neighbors," adding, "The only exception is Armenia, but this or that way, we will take care of that, too. Today or tomorrow, our relations with Armenia will not only normalize, but will be better than ever before. This is our political goal." The sour relations with Armenia that the minister cited as an exception three years ago today have become the routine in  the ‘’precious loneliness" environment.

Also at the end of October, the only issue that Turkey and the United States were on the same page on in their Middle East policies was Turkey’s welcome of Syrian asylum seekers. The last development that further strained the ties with the United States was Ankara’s decision to procure a long-range, high-altitude air-defense system not from its NATO allies but from China.

Finally, it became obvious that Davutoglu was not wasting time with the "precious loneliness" theory like Kalin.

Davutoglu must have realized the so-called preciousness of loneliness could not be the pillar of foreign policy and that he, as the foreign policymaker, could not sustain himself in isolation for long. That is when he launched a multi-pronged charm offensive that became visible in November to extricate Turkey from the isolation that he himself had led it into.

First, in New York on Nov. 1, where he was attending the UN General Assembly, he had a long bilateral meeting with Iranian Foreign Minister Mohammad Javad Zarif. It was announced that discussions on the Syria crisis, bilateral relations and other regional issues would continue in Tehran, where Davutoglu will attend the Economic Cooperation Organization meeting on Nov. 26-27.

On Nov. 10, the Turkish foreign minister went to Iraq for a two-day visit after a break of four years. To counter claims that he has been pursuing a pro-Sunni foreign policy, Davutoglu  visited the Shiite holy cities of Najaf and Karbala.

The latest move was Davutoglu’s trip to Washington on Nov. 18 to meet with his US counterpart, Secretary of State John Kerry. In the joint news conference after their meeting, the two gave optimistic messages on the future of bilateral relations.

In the meantime, we must refer to two interesting events of concern to Turkey, which has been accused of supporting international jihadists and allowing al-Qaeda to use its territory.

One of those events was the seizure in the Aegean Sea of 20,000 AK-rifles and a significant amount of ammunition by a Greek coast guard from a Sierra Leone-registered ship. News reports said that the ship was loaded in Ukraine, its captain and crew were Turks and although Libya was cited as the destination in the manifest, in reality it was heading to Turkey’s Iskendurun port.

The second interesting development was the seizure by Turkish police of 935 semi-finished mortar rounds in a truck after receiving a tip from narcotics. This ammunition was manufactured in workshops of Konya and Adana to be shipped to Syria.

Finally, in recent days the Turkish media have been conveying the impression that Turkey has been revising its Syria policy and has reduced or ended its support to jihadists and has not been as tolerant to al-Qaeda elements as before. But there is no convincing concrete evidence of this alleged revision, apart from the successes the Kurdish Democratic Union Party (PYD) has scored in recent weeks against al-Qaeda-affiliated Jabhat al-Nusra and other jihadists in the Rojava region. That Jabhat al-Nusra could not succeed against the PYD at Rojava without using Turkey proved this to be an accurate prognosis. That is why it is logical to consider the diminishing role Turkey has played in Jabhat al-Nusra’s recent setbacks.

Now, back to our analysis. Davutoglu’s list of contacts generated some optimistic comments from Turkey. Some even spoke of a "reset" of Turkish foreign policy. Some called it "restoring default settings." There were even some who insisted that Davutoglu had reverted to his "zero problems" policy.

Then we have to ask:  Who was the last one to set the default setting of Turkish foreign policy?

If we are speaking of reverting to default settings of the foreign policy concocted by the Erdogan-Davutoglu duo, then that is a dead end because it is these "default settings" that dragged Turkey into the isolation it is now trying to get out of. The much touted "zero problems policy’’ was a political strategy that  could not be implemented and was doomed to collapse from the outset, unless Turkey solved its own Kurdish issue, while Iran and Syria once again become members of the world system. Because of the Syria crisis there can be no return to this policy, which was destined to fail. Nevertheless, AKP foreign policy did not have to lead to such a pronounced isolation and damages.

To understand how we got to this point, it is necessary to look into the questionable mentality and mindset of the architect of this policy. The following lines are from Davutoglu’s address to the general assembly of the parliament on April 26, 2012:

“As Turkey henceforth we will lead the wave of change in the Middle East, we will continue to be the spearhead of this wave of change. In all Middle East societies Turkey is not perceived only as a friendly and brotherly country but as the pioneer of a new approach to redesign the future, a new regional order."

When the new Davutoglu approach emerged in practice as Ottomanism, Sunnism and Islamism, Turkey was quickly isolated and became a country whose intentions were questioned. The damage has been substantial. The crisis in Syria, to which Turkey contributed by its covert militarist policies, today has become an existential threat pointing at Turkey.

The seizure of mortar ammunition alone illustrates how deeply jihadists and al-Qaeda have penetrated Turkey and established themselves. For Turkey to reset its foreign policy, it has to approach the region with classical contemporary values of democracy, human rights, freedom of expression, personal rights and freedoms, pluralism and gender equality. But AKP’s current foreign policy team doesn’t have this potential.

If there is to be a true reset, one of the factors that will not make it work easily is the antagonistic political culture of anti-Semitism, anti-West sentiments and distancing itself from the European Union that the misguided foreign policy of the AKP has bolstered in the country .That is why the theme of reverting to "default settings" cannot be anything but mere propaganda. It is futile for countries to expect those who have dragged their countries into isolation, ruining its foreign policy, to salvage the situation.