Is Turkey 'on the hook' regarding Syria cease-fire?

US-Russia agreement on Syria is a possible breakthrough in peace efforts; Erdogan calls US alliance with Syrian Kurds a “Great Lie.” 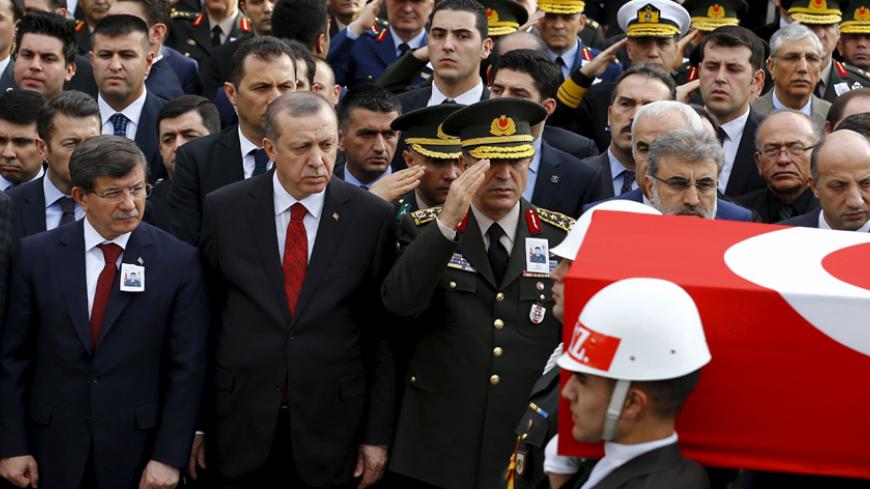 Laura Rozen reported from Washington this week that White House spokesman Josh Earnest said that Russia is “on the hook” regarding a cessation of hostilities in Syria, which was endorsed unanimously by the UN Security Council on Feb. 26.

Rather than pointing out why the agreement might fail, and it might, our starting point is that UN Security Council Resolution 2268 and the US-Russia agreement on a cessation of hostilities in Syria are potential breakthroughs. This is not to say that a cease-fire and peace are just around the corner in Syria. The process is uncertain and fragile. It is to say, however, that the only means of getting there is cooperation between Washington and Moscow, so the developments of the past week are a giant step forward.

The agreement calls for sharing targeting information, which will put Russia to the test regarding attacks on Syrian armed groups allied with the United States. The process has also drawn overdue attention to the coordination among various jihadi armed groups, such as Ahrar al-Sham and Jaish al-Islam with Jabhat al-Nusra, al-Qaeda’s affiliate in Syria. Jabhat al-Nusra and the Islamic State (IS) are outside the bounds of the cease-fire, so these jihadi groups, which are deeply sectarian and backed by outside powers, and sometimes misleadingly described as “rebels,” will finally be held accountable. This column has warned for more than two years about the blurring of jihadi and terrorist groups in Syria, and we reject any ambiguity that would allow al-Qaeda allies and sympathizers, such as Ahrar al-Sham and Jaish al-Islam, to have any role or stake in Syria’s future.

As reported by Rozen and the Wall Street Journal, there are some in the Obama administration who are skeptical about coordination with Russia and may be looking for the first opportunity to scuttle the progress to date. Let’s hope that the cease-fire holds, and if not, that the Obama administration stays on its prudent course. The consequences of a break with Russia would be a setback for counterterrorism cooperation and an intensification of the war in Syria. If the administration hawks believe that Russia and Iran can be beaten back in Syria, they are in the realm of fantasy. Moscow and Tehran are massively invested in Syria, more so than the United States, and they are not leaving. Both also have a high tolerance for violence, a view unfortunately shared by America’s regional allies. The administration’s hard-fought diplomacy, let by US Secretary of State John Kerry, should be applauded, not second-guessed, with full awareness that there will be many hurdles ahead.

Is Turkey “on the hook” in Syria?

If Russia is “on the hook” in Syria, one might ask the same about Turkey. Turkish President Recep Tayyip Erdogan on Feb. 24 characterized US cooperation with Syrian Kurdish armed groups as a “great lie” and expressed skepticism about the UN-backed cease-fire.

Erdogan’s remarks came five days after he spoke by phone with US President Barack Obama. According to the White House, “Obama stressed that YPG [People's Protection Units] forces should not seek to exploit circumstances in this area to seize additional territory, and urged Turkey to show reciprocal restraint by ceasing artillery strikes in the area. … The two leaders expressed their support for the understanding reached in Munich last week on the cessation of hostilities in Syria and called on Russia and the [Bashar al-] Assad regime to halt airstrikes against moderate opposition forces.”

Obama has put Turkey on the spot regarding Erdogan’s next moves in Syria. Kadri Gursel explained the evolution of Turkey’s desperate, and failed, Syria policy. “Ankara’s Syrian policy — basically an attempt to topple Assad and install Islamists to power in Damascus — collapsed a long time ago. The Ankara-backed jihadis and other radical Islamists keep losing ground against the Russian-backed Syrian army and the People’s Protection Units (YPG), the armed force of the Syrian Kurds. Now that the intervention idea is also dropped, what options could be left for Erdogan and [Turkish Prime Minister Ahmet] Davutoglu to sustain their claim in Syria?”

Gursel put in context Davutoglu’s recent comments to Al Jazeera about Turkey's past and continuing support to Syrian armed groups: “Davutoglu’s remarks constitute an open confession of how he and Erdogan have made Turkey a direct party to the Syrian war. If the Damascus regime has lost territory control because of Ankara’s role, Davutoglu’s words mean he assumes also the historic responsibility for the seizure of these territories by myriad jihadi and radical Islamist forces, including IS and Jabhat al-Nusra. If regime opponents have been able to defend themselves thanks to Turkey, as Davutoglu says, they could have done so only with weapons sent from Turkey. Hence, Davutoglu’s remarks constitute also an implicit acknowledgement of arms supplies to the rebels. And his pledge of continued support echoes like the continuation of arms supplies as well. In sum, Ankara has given up the idea of intervention, but the position it maintains keeps the risk of a military confrontation with Russia alive.”

Semih Idiz took the measure of Turkish foreign policy elites and concluded that “Ankara’s foreign policy under the ruling Justice and Development Party (AKP) is in shambles. They generally agree this was caused by the country abandoning its traditional foreign policy in favor of an Islamist outlook. This situation, experts argue, has reduced Ankara’s options significantly, especially at this turbulent time in the region. … The AKP has a vindictive approach to foreign policy and ostracizes those who refuse to listen to it, eventually looking on them as its foes.”

Metin Gurcan reported from Ankara on the convoluted and rushed identification of the Feb. 17 Ankara car bombing of a military convoy that killed 30 people: “Ankara’s narrative changed three times. First, Davutoglu declared Ankara had incontrovertible evidence that it was a YPG member. Then Ankara charged that the TAK [Kurdistan Freedom Falcons] had falsely claimed responsibility to acquit the PKK [Kurdistan Workers Party]. When it was firmly established by DNA testing that the perpetrator was Abdulbaki Somer, Ankara’s narrative became that all terrorists groups are one and the same. It was not difficult to detect similarities in Ankara's reaction to this car bombing and the earlier train station massacre. Such an ill-defined, obscure concept of threats that lumps all types of opposition groups together causes serious confusion for the security bureaucracy. Then one has to ask why Ankara so hastily announced the identity of the bomber and why it relied on instinctive accusations. The well-placed sources in Ankara went mute when asked this question. Nowadays in Ankara, when the answer to your question is silence, it is an indication of the bottlenecks in Ankara’s crisis-management mechanisms. Ankara simply can’t deal with ‘gray’ areas. This weakness contributes to political, ethnic and sectarian polarization internally, and further questioning of Ankara’s position on Syria in the international arena.”