Debate over the identity of the February suicide bomber in Ankara reveals flaws in authorities' communication. 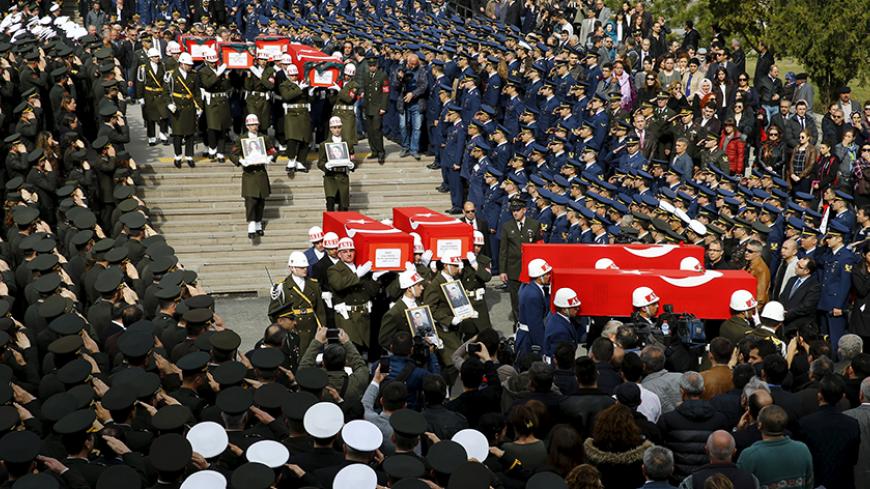 The Feb. 17 suicide bombing in Ankara that targeted government and military personnel will be remembered as Turkey’s first “gray” terror act. Authorities wanted to consider it a black-and-white case. But faulty, murky communication about the attacker's identity leaves it gray.

The morning after the attack, Prime Minister Ahmet Davutoglu clearly and firmly announced that the People's Protection Units (YPG), which it says is affiliated with the Kurdistan Workers Party (PKK), was behind the attack. He said there was concrete evidence that the perpetrator was Salih Neccar and that he was linked to the YPG.

After Davutoglu’s statement, news reports identified the perpetrator as Salih Neccar, a Kurd from Hasakah, Syria, born in 1992.

While initially most people accepted such a high-level and definitive declaration from Ankara as factual — although questioning its speed — another version emerged two days later. The Kurdistan Freedom Falcons (TAK) dismissed Ankara’s identification of the attacker as Salih Neccar of the YPG and instead claimed the attacker was Turkish citizen Abdulbaki Sonmez of Van province. The TAK also released a photograph of Sonmez and a short biography.

However, shortly afterward it became clear that the photograph used in the TAK statement released by the PKK-partisan ANF news agency had been digitally altered.

Further reports said Abdulbaki’s real last name was not Sonmez as first claimed, but "Somer." This discrepancy aroused doubts about the veracity of the TAK's statement, and Ankara’s version gained credence.

Six days after the attack, as uncertainty about the perpetrator's true identity continued, Davutoglu ruled out the TAK’s declaration. “Why did the TAK wait for three days to claim responsibility for this attack? There are no contradictions with the information we uncovered on the first day and what we know today,” Davutoglu said. “The PKK-YPG linkage is clear. All organic ties are exposed. Our evidence and documents are there to see." However, he continued on to say that that TAK, the PKK and other groups are all of the same ilk. "Their owners and puppeteers are one and the same.”

On Feb. 24, one week after the attack, news attributed to the public prosecutor said that, as the TAK had declared, the perpetrator was Abdulbaki Somer, born in 1989, and that his family had declared him a missing person in 2005. This finding, which embarrassed Ankara officials, was verified by DNA.

Somer's father, Musa Somer, said his son had run away from home at age 16 and joined the PKK. The father said he had searched unsuccessfully for his son for 11 years in the PKK camps of northern Iraq and Turkey.

The debate about the attacker's identity and the competition between Ankara and the TAK that lasted for a week showed that in real life, no terror attack in Turkey can be categorized as black or white as Ankara regularly claims.

According to impressions Al-Monitor gained from contacts with well-placed sources in Ankara, Abdulbaki Somer had assumed the identity of Salih Neccar. In other words, both the versions released by Ankara and claimed by the TAK are based in fact. Abdulbaki Somer spent 10 years in northern Iraq and Turkey, then joined the TAK in 2014. Later that year he moved to northern Syria and joined the YPG for 1½ years. He then assumed the identity of Syrian refugee Salih Neccar and "legally" entered Turkey in July 2015, thus erasing his incriminating record in Turkey and arming himself with a new identity. Since July, with his Salih Neccar identity, he had apparently avoided criminal activities and did not contact his family members.

The question now is how was Somer able to claim he was Salih Neccar when entering Turkey, when he was fingerprinted and photographed? Did someone help him or does this manifest a security flaw in Turkey’s immigration procedures? Another vital question is how many others are there like him in Turkey?

The attack and its aftermath also revealed Ankara’s impulsive and hasty declaration of this "black fact" to be a severe communication mishap.

In the seven days following the Feb. 17 bombing, Ankara’s narrative changed three times. First, Davutoglu declared Ankara had incontrovertible evidence that it was a YPG member. Then Ankara charged that the TAK had falsely claimed responsibility to acquit the PKK. When it was firmly established by DNA testing that the perpetrator was Abdulbaki Somer, Ankara’s narrative became that all terrorists groups are one and the same.

It was not difficult to detect similarities in Ankara's reaction to this car bombing and the earlier train station massacre. Such an ill-defined, obscure concept of threats that lumps all types of opposition groups together causes serious confusion for the security bureaucracy.

Then one has to ask why Ankara so hastily announced the identity of the bomber and why it relied on instinctive accusations. The well-placed sources in Ankara went mute when asked this question. Nowadays in Ankara, when the answer to your question is silence, it is an indication of the bottlenecks in Ankara’s crisis-management mechanisms. Ankara simply can’t deal with "gray" areas. This weakness contributes to political, ethnic and sectarian polarization internally, and further questioning of Ankara’s position on Syria in the international arena.