The suicide bomb in Ankara on Feb. 17 was the first of its kind, and Ankara is now under pressure to make critical decisions. 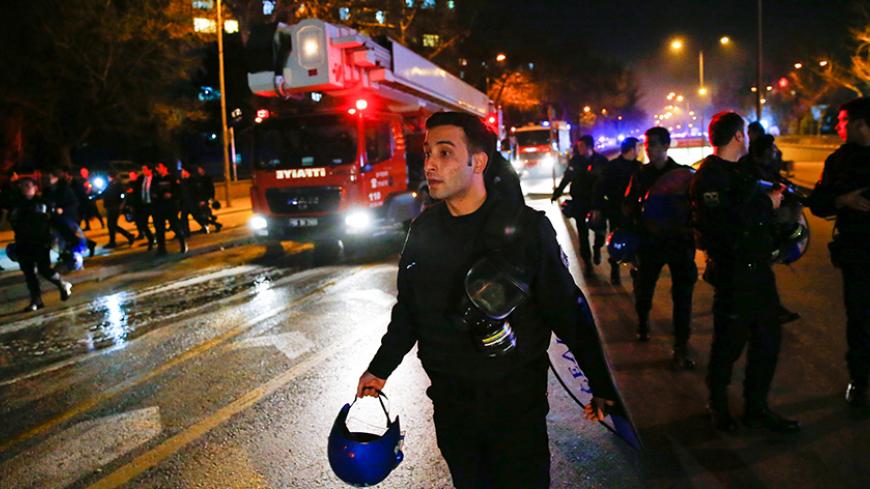 The car bomb attack that rocked Ankara Feb. 17 killed 28 people, most of them military personnel. About 100 others were wounded. The assailant was also killed.

Three features of this attack were seen for the first time in Ankara. First, a moving vehicle was used for a suicide attack. Its location was also significant: 500 meters from the parliament, 300 meters from the headquarters of the chief of General Staff, 150 meters from the air force command and 100 meters to the quarters where generals reside. It was the first time military and civilian personnel working at the Chief of Staff offices and at air, naval and ground forces commands have been targeted. The question everyone is now asking is whether such an attack could be repeated there or in Istanbul and other major Turkish cities.

In his statement early the next morning after the attack, Prime Minister Ahmet Davutoglu said in tough language that the Democratic Union Party (PYD), linked to the Kurdistan Workers Party (PKK), was behind the attack and that concrete evidence of PYD responsibility will be shared with allied countries led by the United States.

Then followed media reports that the perpetrator was Saleh Najjar, a Kurd from Hasakah, Syria. Najjar had legally entered Turkey as a refugee on July 8 and properly applied to the police and immigration offices, where he completed the routine formalities. He was photographed and fingerprinted. After receiving his foreigner identity number, Najjar lived in different cities but was not involved in any criminal activity and attracted no attention from the police and intelligence services.

Following Davutoglu's damning statement, PYD leader Salih Muslim declared his organization didn’t know the culprit and had no connection with him.

Prominent PKK leader Cemil Bayik said his organization had no direct connection with the perpetrator and was not involved in the operation, adding, ‘‘We don’t know who did it, but it could be a revenge operation against massacres in Kurdistan.”

Though Ankara alleges the attack was carried out by the “PKK-linked YPG,” these denials contradict the PKK’s usual practice of taking credit for its attacks.

The speed of the prime minister‘s revelation of the attacker's identity became a major topic of debate over social media. Reports said 29 bodies had been found. As 20 of them were military personnel whose fingerprints were on file, they were identified quickly along with eight other civilians. Then the ninth body, said to be torn into 158 pieces, was identified as Najjar's by his fingerprints.

Ankara insists that the YPG is behind the attack and that there is ample evidence. Nevertheless, many people are asking why the PYD, which has made impressive gains in northern Syria recently and has built good relations with the United States and Russia and a positive international image on its Islamic State (IS) struggle, would pursue an operation that could only hurt its interests. There are those who describe the attack as inspired by the PKK and under YPG influence but not directly ordered by the leaders of the two organizations.

This narrative points to a situation that is going to make Ankara uncomfortable: We have to recognize that this attack was in retaliation to ongoing security operations in southeast Turkey and the artillery fire against YPG targets in the Afrin region.

The PKK has been learning from fighting IS. One technique that the PKK has adapted well is the decision-making process for operations, allowing local cells to decide on their planning, execution and financing. This means we are facing autonomous cells that don’t take direct orders from the PKK's upper echelons and that they plan their attacks by assessing the developments on the ground. Bayik’s statement appears to support this thesis. While persistently denying any PKK link to the attack, he drew attention to youngsters who are capable of deciding by themselves and taking action in response to field developments. Bayik also said the PKK respects such decisions. This decentralization inside the PKK brought about by its involvement in Syria and combat against IS is something new. Previously, the PKK was known for its strict organizational discipline and absolute command structure. By embracing the rising trend of youth rebellion, the PKK is trying overcome the pressure it's under in Syria and southeast Turkey by transferring its operations to Ankara and the country's west.

While putting pressure on Ankara with such low cost, low risk and highly effective operations, these autonomous cells do not endanger the PKK’s growing international visibility and reputation. But the PKK’s approach of franchising violence makes the war dirtier. The PKK’s need to mitigate the pressure it's under in Syria and the southeast makes it difficult for it to grasp how dirty the war has become. Meanwhile, Ankara, isolated in Syria, is having problems explaining its views to the United States, other Western allies and the international public. Naturally, Ankara’s blemished reputation and eroding persuasive powers are serving the PKK.

Diplomatically, Ankara will keep trying to persuade the United States and the rest of the West that there is an organic link between the perpetrators and the YPG and that the YPG, under direct command of the PKK, was behind the attack. But Ankara still has the problem of persuading its allies about the Syrian issue. This time it is imperative for Ankara to take a stand with solid intelligence to back it up. Nevertheless, given the developments in Syria, it appears unlikely that the United States will change its attitude and terminate its cooperation with the PYD.

What Ankara can do the on the ground is limited. About two hours after the Ankara bombing, at around 8:30 p.m. local time, Turkish planes struck a group of 60-70 people that included some senior PKK leaders in Iraq’s Haftanin area. But it is almost impossible for Ankara to conduct such an operation against YPG targets in Syria because of the de facto no-fly zone Russia has imposed in the country's north.

It is possible that the Turkish howitzer fire on YPG targets in Syria will be intensified and the border crossings between the PYD-controlled area and Turkey will be further restricted. Ankara is also likely to adopt an even tougher line in its operations in the southeast because of recent military casualties sustained in that area. In a nutshell, Ankara doesn’t really have too many effective options.

One must not ignore the ethical, sectarian, political and socio-economic fault lines that will deepen with Ankara’s toughened approach to security. The real question Ankara must ask is why Turkey has become a country where acts of terror are so easy.