Anatomy of a Turkish assassination fable 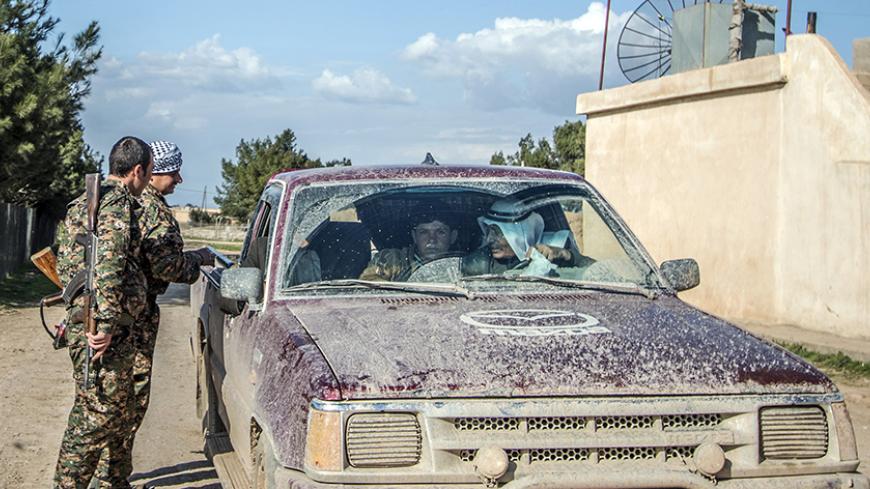 It was all over the front pages in Turkey: "The No. 2 leader of the Kurdistan Workers Party [PKK], Fehman Huseyin [also known as Bahoz Erdal], has been killed.” Those who believed this news report were deemed "patriots," but those who questioned it were “terror supporters.” This is how the pro-government newspapers classify journalists.

The government-controlled Anatolian Agency dropped the bombshell July 9: “Khalid al-Hasekavi, the spokesman for the Tel Hamis Brigades that is fighting the Syrian regime, has disclosed that Fehman Huseyin, a senior leader of the PKK, was killed when his car was blown up. Hasekavi told [an] AA correspondent that Fehman Huseyin was targeted last night, July 8, when he was traveling from Himo to Qamishli.”

Pro-government media followed with a statement purportedly issued by the Special Operations Unit of Tel Hamis Revolutionaries Battalions. The "brigade" that the Anatolian Agency had referred to was thus suddenly downscaled to a battalion.

Even though no one questioned whether an organization called Tel Hamis Brigades even exists, or who Hasekavi is, the report made headline news. The media was flooded with boastful comments about how the PKK had received a deadly blow, how their Qandil headquarters was in turmoil and how Erdal’s assassination proved beyond a doubt the organic links between the PKK and the Kurdish nationalist Democratic Union Party (PYD). Lack of confirmation from Turkey’s military high command did not slow down the media coverage. President Recep Tayyip Erdogan contributed, “There is some information that he was killed in Syria while he was with a team of 14 people. Work is going on to confirm the reports.”

Government spokesman Numan Kurtulmus was more circumspect. “We will make an official announcement after these reports are confirmed,” he said.

Pro-government media responded to this denial: “The PKK is amazingly, deeply silent." Spirits were so low at Qandil, the media said, that the only response the PKK could muster was a simple denial.

Previously, nobody had heard of an organization called Tel Hamis Brigades. Moreover, the statement attributed it contained phrasing that some say indicates it wasn't issued by a Syrian organization, let alone a Syrian anti-regime group. The statement said Erdal was the "so-called overall leader of the PKK." The phrase "so-called" is a hallmark of the Turkish military and other official bodies when referring to the PKK.

The PKK was called "separatist" and an "occupier." The PYD and the Kurdish People's Protection Units (YPG) were defined as “PKK’s Syrian extension occupiers.” Another tip that the statement might not have come from the Syrian opposition was the use of the formal military word "tarassut" (surveillance).

The "proof" — supposedly provided by the brigades — that Erdal’s vehicle was blown up was a daytime photo of a car the YPG had exploded in 2014. To make it appear as a night scene, its negative was used.

Sabah offered new details July 12: “The first attack against Bahoz Erdal, who had been under surveillance for seven months, was with an explosive, but he escaped unhurt. In the second attack, a bomb was put in his car. Six of his bodyguards were killed but Erdal survived with wounds. The latest attack was when Erdal was returning from Himo, where he had gone for treatment” of those wounds.

Haber TV on July 12 quoted an undisclosed government official as saying, “The report of his death is accurate. Intelligence has confirmed it.” The next day, newspapers carried this confirmation as a credible news report.

However, Bas News Agency, which is close to the Kurdistan Democratic Party, reported Erdal was hurt and evacuated to a hospital in Sulaimaniyah (Kurdistan) with the help of the Syrian regime.

Then Murat Karayilan, a senior PKK leader, said, “We debated it among us. Some comrades said we don’t have to respond because Turks want it, nor is there a need for comrade Bahoz to speak. But now the feeling is to let Bahoz speak out and thus put an end to all these lies. That is why our comrade Bahoz can make an appearance. He is at his post.” Karayilan denied Erdal was even in Qamishli at the time and said Tel Hamis Brigades was a creation of the Turkish intelligence service, the MIT.

That was followed by an audio recording aired by Denge Kurdistan Radio in which Erdal said, “I am alive. They are trying to conceal their weakness and defeat with lies. News spread by the Turkish media and state is not correct. This is a method of special warfare. They ask, 'Where is he? Why he is not visible?’ We are the fighters for our country. As a fighter, I am where I am. Am I to inform the AKP [Turkey's Justice and Development Party] regime of my whereabouts? I am not obliged to tell them. AKP fears its ties with [the Islamic State] would be exposed. That is why it is afraid of Rojava [Syrian Kurdistan].”

Before Erdal spoke out, a Kurdish source in Qamishli told Al-Monitor, “A YPG vehicle transporting ammunition exploded by itself. It wasn’t attacked. We have had similar incidents before. That vehicle had nothing to do with Bahoz Erdal.” Another source said, “Since the beginning of the Syrian crisis, Bahoz Erdal has come [only] twice. He has not been in Syria for a long time. I am 100% sure of this.”

Then why all of this drama? Kurdish sources offered Al-Monitor possible reasons for the assassination claim:

Another source confirmed there have been reports that the Turkish government has adopted a strategy to eliminate PKK leaders. Batuhan Yasar of the daily Turkiye wrote June 15 that security services had been given written orders to kill PKK leaders Cemil Bayik, Murat Karayilan, Duran Kalkan and Erdal. The article also said there had already been two operations against Erdal; he escaped from the first one at the last minute and was wounded in the second.

Abdulkadir Selvi, a Hurriyet columnist known to be close to the government, also touched on the state’s policy of assassinations. “An operation similar to the one against Erdal was staged against Sofi Nurettin but did not succeed. Turkey has belatedly adopted a ‘leadership concept’ against the PKK. Special forces, either by entering Iraq and Syria or by using groups close to Turkey, carry out such operations against the leadership cadres.”

Selvi also claimed Erdal was the one who had planned the Manbij operation that was supported by the United States: “For a while, Turkey has been trying to say that the PKK and the PYD are one and the same. We have been saying that some PKK leaders led by Bahoz Erdal are also in the command of the PYD and are personally involved in the Syrian civil war by commanding the YPG. Killing Bahoz Erdal in Syria’s PYD-controlled region would reinforce Turkey’s claims.”

So by that theory, the assassination claim was meant to prove that the PKK is controlling the process at Rojava. A PYD official Al-Monitor reached agreed, saying that’s all there is to it.