Is the PKK worried by the YPG's growing popularity?

The PKK, known for its hierarchical nature and its discipline, may be displeased by the growing global visibility of the Syrian YPG. 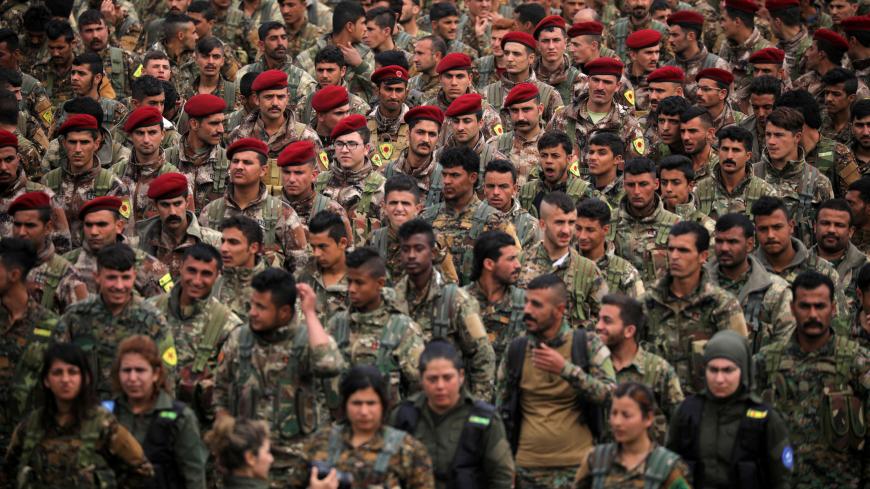 Kurdish fighters from the People's Protection Units (YPG) take part in a military parade as they celebrate victory over the Islamic State, in Qamishli, Syria, March 28, 2019. - REUTERS/Rodi Said

The past month has seen mind-boggling developments in northern Syria involving the Kurdish Democratic Union Party (PYD) and its military wing, the People's Protection Units (YPG). For Ankara, the most glaring unintended consequence of the now static Operation Peace Spring is the newfound legitimacy of the YPG in Western public opinion.

The YPG is an offshoot of the Kurdistan Workers Party (PKK), which Turkey, the United States and many Western powers consider a terrorist organization. However, the YPG has gained great sway in the eyes of the Western public thanks to its success in the war on the Islamic State (IS), particularly its contribution to the raid targeting the group's leader, Abu Bakr al-Baghdadi.

According to many in the West, the PYD and YPG are “freedom fighters” defending humanity and Western civilization against the barbarism of IS. They are seen as the West's lone partners in Syria.

Before the Kurds’ fight against IS began in 2011, the concept of Rojava — also known as Syrian Kurdistan — was just a PKK-inspired idea intended to forge a collective Kurdish identity. Today it is a brand gaining global recognition.

YPG commander Mustafa Abdi — aka Mazlum Kobane — has also become a global brand. He recently had phone conversations with Donald Trump and top Russian officials, and some members of Congress even called on the Trump administration to expedite Abdi's US visa process.

Abdi, a Syrian Kurd from Kobani on the Syrian-Turkish border, first joined the PKK in the '90s. He was sent to Syria in 2011 to form a military command to defend the rights of the Syrian Kurds in the civil war.

A Kurdish researcher who spoke to Al-Monitor said that the PKK command in Qandil is finding it hard to swallow the success and flourishing reputations of Abdi and Ilham Ahmed, the co-chair of the Syrian Democratic Council.

Yet the PYD and YPG's organizational structure and decision-making mechanisms are a black box. It is unknown whether their leaders are elected through a bottom-up process or appointed by the PKK. How do they determine their strategic preferences in this complex diplomatic arena? Does the YPG possess a leftist ideology or a Kurdish ethno-nationalist ideology? How influential is the PKK leadership in the decisions of the YPG and PYD?

Everyone, especially the United States and Russia, wonders whether the PYD and YPG — which they consider key pieces of Syria's future — will remain under PKK control or become a semi-autonomous body.

The answer may be found in the history of the PKK in Syria.

The PKK used Syria as a base from 1979 to 1998, during which it gained ground for itself in northern Syria. But when Turkey and Syria signed the Adana accord in 1998, Damascus ended its support for the PKK and expelled its leader Abdullah Ocalan from the country. Since then, the PKK has kept a low profile in northern Syria.

However, in 2002, the Kurdistan Freedom and Democracy Congress, or KADEK, created new organizational bodies in Iraq, Iran, Syria and Turkey during a PKK Congress. Sofi Nureddin became general director of Syrian operations under the top tier of the Kurdistan Communities Union (KCK), the political organization that implements Ocalan's ideology of Democratic Confederalism in host states.

The name KCK-Rojava was dropped to hide the connection with the PKK and KCK. In Syria, the KCK was organized under the PYD and YPG. Furthermore, the Movement for a Democratic Society (TEV-DEM) was launched to implement Democratic Confederalism in Kurdish-populated Rojava.

Abdi, meanwhile, was responsible for the PKK’s organizational structure in Europe from 1997 to 2003. He was a member of the executive board of the PKK's high command in 2005.

After arriving in Syria in 2012, Abdi has gradually advanced his standing in the field fighting IS. He has made contacts with international forces — primarily the United States — and became a figure sought after by international news media.

It is known that Abdi was criticized within the PKK for his close ties with the Americans and that PKK senior officials Sabri Ok and Fehman Huseyin frequently warned him about this.

No doubt his name became well known thanks to Trump's praise and his popularity among US members of Congress.

The PKK is known for its strong internal discipline. Personal popularity is not appreciated. Also, as a leftist organization, it is skeptical of the United States. The success story of Rojava and its emergence as a driver of the quest for an independent Kurdistan supports this assessment.

As the United States treated the YPG and PYD officials like VIP guests, their leadership trio were branded as terrorists. Of course, the leadership is aware of the discrepancy.

Among Kurdish circles, many claim that the YPG and PYD owe their success to the PKK, but now the United States is hijacking the success story. PKK official Mustafa Karasu wrote in a recent article that the United States was trying to sideline the PKK in Rojava.

“The United States is trying hard to adopt the Rojava revolution to its own ideological and political lines, but this should not be allowed," he wrote. "If the United States didn’t have such a goal it would not have turned a blind eye to Turkey’s operation.”

A frequent subject of debate is what ideology is dominant within the PYD and YPG: Kurdish ethno-nationalism or a leftist ideology. The radical camp in the organization defends the view that the global revolutionary camp is centered in the Middle East; the Kurdish people are the pioneers of the revolutionary process; and their political party is the PKK.

Some quarters think that leftist radical ideas have damaged the Rojava experience and the PYD and YPG-inspired quest.

Overall, Qandil and this emerging power center in Rojava are distinct in many ways.

Whether the PYD and YPG embrace Washington or Moscow as a long-term strategic partner will directly impact not only the future of Rojava but also the PKK-led Kurdish quest in the region.