Violence in Turkey could push US to pick sides in Turkey, PKK battle

The escalation of violence in Turkey is reaching such a magnitude that Turkey may not be an effective coalition partner against Washington’s priority, the Islamic State. 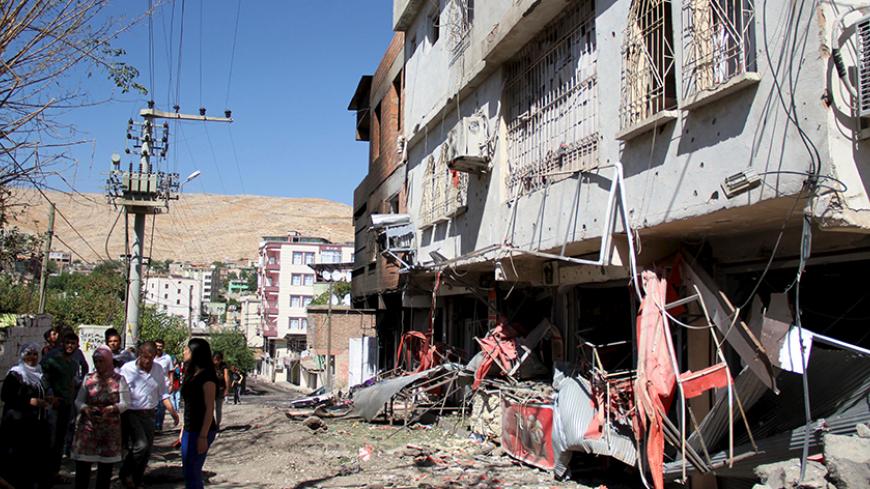 People gather outside a damaged building after clashes between Turkish security forces and members of YDG-H, the youth wing of the outlawed Kurdistan Workers Party, in Silvan, near the southeastern city of Diyarbakir, Turkey, Aug. 18, 2015. - REUTERS/Sertac Kayar

The US State Department denies it has been in talks with the Kurdistan Workers Party (PKK), contrary to a PKK leader's comments published Aug. 17 in the Daily Telegraph of London.

State Department spokesman John Kirby, in his daily briefing Aug. 17 in Washington, was asked about the newspaper's interview with Kurdish political leader Cemil Bayik, who said the PKK would accept a cease-fire with Turkey under US guarantees. Bayik referred to indirect talks with the United States.

Bayik is a founder and a top-ranking official of the PKK — which has been designated a terrorist group by the United States and Turkey — as well as a leader of the Kurdistan Communities Union (KCK), the political umbrella organization of which the PKK is a part. ”Of course there are messages, there are meetings, letters and they are likely to develop more,” Bayik said of communications with the United States.

“I can tell you that we are not in direct talks with the PKK — absolutely not. This is a foreign terrorist organization. We don’t sit down and have talks with the PKK,” he said. “Nothing’s changed about our position on the PKK — that they need to renounce the violence, they need to resume a peace process and stop attacking the Turks inside Turkey.”

He elaborated: “No direct, no indirect. There’s no talks with the PKK.”

The Daily Telegraph interview, carrying the headline “PKK urges US to mediate in its war with Turkey and admits to secret talks with Washington,” was a news scoop and a political bombshell.

In the interview, Bayik said, “The American role in the Northern Ireland peace process showed how this could work — but it was down to America to intervene and call Turkey to order.” He added, “If America continues to back Turkey’s policies, it will lose the Kurds. If America loses the Kurds, it will be difficult to defeat [the Islamic State (IS)].”

Who is telling the truth, Kirby or Bayik? Both. But Bayik is closer to the truth, because what Kirby says is more a matter of semantics than of politics. Washington frequently states that the United States considers the PKK a terrorist organization — but not the PKK's Syrian affiliate, the US-supported Kurdish nationalist Democratic Union Party (PYD), or the PYD's military arm, the Kurdish People's Protection Units (YPG).

Therefore, relations with either PYD or YPG cannot be described even as “indirect” talks with the PKK. In this game of semantics, the US position sounds reasonable and fair.

Yet, if one is looking for indirect American contacts with the PKK, then examining Washington’s links with the PYD and particularly the YPG is the best way to track them.

Only a week ago, The New York Times ran a detailed and interactive news analysis titled “Why Turkey is fighting the Kurds who are fighting [the Islamic State].” The Aug. 12 piece said, “The YPG is perhaps America’s most effective ally in Syria against the Islamic State. But American officials, though they will broadly acknowledge that they are working with the YPG, take pains not to detail just how closely the forces are working together, given the group’s ties to the outlawed PKK.”

The news analysis followed an Aug. 10 story headlined “Inside Syria: Kurds roll back ISIS, but alliances are strained,” which provided concrete data on military cooperation between the United States and the YPG in Syria, fighting against IS.

It is obvious for observers in Turkey who are following Kurdish developments that Bayik’s wording meant that the contacts are established through the PKK’s Syrian affiliates.

It is not but self-deception if anybody really believes that the PKK and the PYD, and their respective armed wings, the People's Defense Forces (HPG) and the YPG, are totally independent from each other. Obviously, the Americans are aware of it.

“American officials have always had to step carefully when cooperating with the Kurdish militia in Syria because of its links to the PKK, which is widely listed as a terrorist group. American officials have acknowledged cooperating with the militia in general terms. … The United States and members of the militia take pains to note that it is not the same group as the outlawed PKK. But on the ground in northern Syria, the connective tissue is hard to miss. Framed portraits of Abdullah Ocalan, the founder of the PKK, and champion of Kurdish autonomy, can be seen hanging in the offices and headquarters of the YPG militia. Fighters wear pins bearing his image.”

The latest conflagration in Turkey’s Kurdish-dominated regions between the security forces — both military/police and the pro-PKK elements — has been taking lives every day and is dangerously evolving toward the “Syrianization of Turkey.” The battle should be assessed within the triangular framework of Turkey’s escalation of fighting against the PKK, the United States (which secured the use of essential Turkish air bases for the fight against IS) and the PKK’s political aspirations to involve Washington as a broker between Turkey and itself.

Bayik, with a reputation of being a hawkish former Marxist, paradoxically (and perhaps realistically) has persistently tried to mend fences with Washington and win recognition. In December, in an interview with British daily The Guardian, he said, “The PKK hoped that its cooperation with the US-led international coalition fighting IS would lead to it being delisted as a terrorist organization by Western countries.”

His interview at that time, with Turkish-Kurdish TV channel IMC, was published with an intriguing headline: “Cemil Bayik: Let US be the mediator; otherwise if we do not start negotiations it will either be a civil war or a coup.”

The Turkish government has launched a ruthless campaign against the PKK that can only escalate with the most recent Turkish military fatalities, in the wake of reaching a deal with Washington to be more active against IS, thereby opening its bases for US warplanes. The developments effectively ended the fragile cease-fire and the hostilities between the Turkish government and the PKK — otherwise known as the Turkish affiliate of the YPG, the staunch US ally in Syria against IS.

The escalation of violence in Turkey is reaching such a magnitude that Turkey may not — perhaps even cannot — become an effective coalition partner against Washington’s priority, IS. If all the energy and the military potential of Turkey is devoted to fighting the PKK, it can hardly focus on fighting or contributing to the fight against IS.

This is exactly the point that the PKK leadership may be capitalizing on, obliging Washington to step in as a valuable intermediary in resolving the Turkish-Kurdish battle — which would require the PKK to be delisted as a terrorist organization and to be considered a loyal ally against IS.

Washington’s seeing IS as priority — and the ever-deteriorating security, and thus an unsustainable situation in Turkey — may prompt the United States to step in. It is then a short step for the PKK to goad Washington to a crossroads: To stand with Turkey would be to lose the Kurds and weaken the fight against IS, particularly in Syria.

For Washington, relying on long-worn-out cliches such as “Turkey has a right to self-defense” and “the PKK is a terrorist organization” may not prevent it from being dragged into a Turkish-Kurdish quagmire.