Turkey touts assassination of top PKK militant as retribution to US

The Turkish media has trumpeted the killing of a high-ranking PKK militant by Turkish security forces in northern Iraq as a reprisal of the US support of the Syrian Kurdish groups, while Turkey seems to be a major blockade before Syrian Kurds’ desire for political recognition. 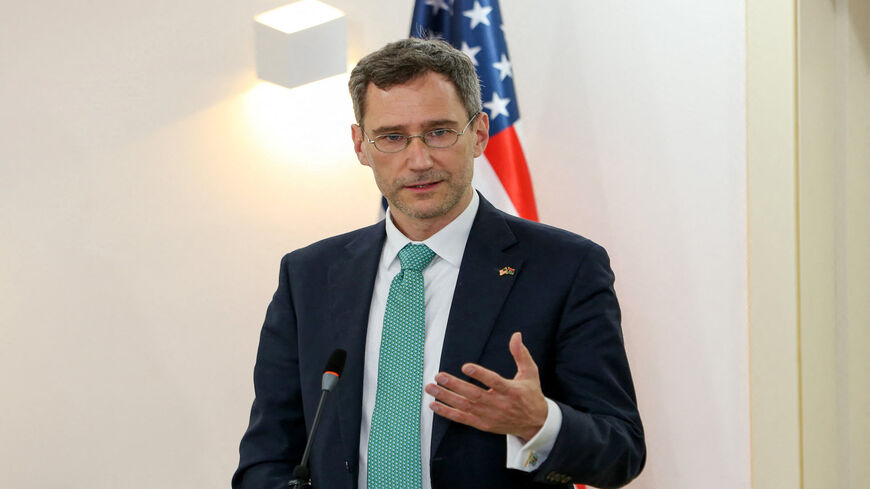 Senior US State Department official Joey Hood delivers a statement in Tripoli during a visit to Libya, in a show of support for the country's transitional government, May 18, 2021. - -/AFP via Getty Images

The US support for the Syrian Kurdish groups will likely remain a major problem between Ankara and Washington as the Syria leg of a high-level US delegation's recent Middle East tour signals.

A US delegation that included Acting Assistant Secretary Joey Hood, Deputy Envoy for Syria David Brownstein and White House National Security Council Director for Iraq and Syria Zehra Bell traveled to northeast Syria on May 16-17, meeting officials from the Syrian Democratic Forces (SDF), Syrian Democratic Council, as well as prominent tribal leaders from the northeastern Syrian province of Raqqa. The visit seemed to be aimed at staving off the destabilizing elements in the region as the Biden administration is shaping its foreign policy moves in the Middle East.

The delegation’s trip marks the first high-level visit by the US State Department to northeast Syria — also known as Rojava. The nature of the talks was also different, according to a Syrian Kurdish source familiar with the meetings.

Speaking to Al-Monitor, the source said unlike previous contacts between the two sides, the Americans haven’t reiterated Washington’s demand for the Syrian Kurdish groups to cut off their ties with the outlawed Kurdistan Workers Party (PKK), an armed group that has fought Ankara since 1984 and is considered a terrorist organization by Turkey and the United States. Turkey considers the Kurdish People’s Protection Units (YPG) — the backbone of the SDF — a terrorist group linked to the PKK. According to the source, in response to the US envoys’ question in regard to Kurdish conditions for a possible dialogue between Ankara and the Kurds, the Kurdish officials reiterated their demand for withdrawal of the Turkish forces from the region. The sides discussed also the possibility of US troop withdrawal from the region and what kind of support could be provided for the Kurds in addition to the air support in the event of a possible withdrawal.

The talks have not only attested both sides' commitment to military cooperation against the Islamic State (IS), but also served as a prelude for political-diplomatic dialogue between Washington and the Syrian Kurdish groups.

SDF commander Mazloum Abdi — who is often referred to as Mazlum Kobane — said the United States would remain in Syria to strengthen the autonomous administration and for an all-out victory against IS, in a tweet he posted after the talks. Bedran Chiya Kurd, a senior official in the autonomous administration, said the Kurdish side expressed their grievances for the grave human rights violations in Afrin by the Turkey-backed opposition groups and Ankara’s policy to cut off the region’s water for political reasons.

The American side, in turn, stressed the US’ commitment to support the stabilization efforts in the region. The US officials also emphasized the importance of reconciliation efforts between the rival Kurdish parties in their contacts both in Erbil and northeast Syria.

Although Ankara has refrained from escalating the rhetoric against Washington over Syria ahead of a planned meeting between Turkish President Recep Tayyip Erdogan and US President Joe Biden on the sidelines of the June 14 NATO summit, the Turkish media painted the killing of a high-ranking PKK militant by Turkish security forces in northern Iraq as a reprisal to the talks in northeast Syria. While the American envoys were holding meetings in northeast Syria, Erdogan announced May 17 that Turkish security forces had killed a high-ranking PKK militant in northern Iraq. Noureddin Halef al-Mohammed, who was identified by his codename Sofi Noureddin, is said to be responsible for the PKK’s operations in Syria. Erdogan said the case of Sofi, a Syrian national, proved that the PKK and YPG “are the same organization.” The message was clearly aimed at the United States.

Turkey’s Defense Ministry said the militant was killed May 8 in a joint operation by Turkish Intelligence Agency and Turkish Armed Forces. Yet the PKK’s armed wing has denied the killing without mentioning Sofi’s name and merely saying that the reports “have nothing to do with facts.” The Turkish government has been recently targeting the Syrian leadership of the PKK in a bid to expose what the government argues is proof of the YPG’s affiliations with the PKK. Previously, Ankara had also claimed to have killed Bahoz Erdal, one of the top commanders of the PKK.

The absence of Turkey from the US envoys’ regional tour — which included the United Arab Emirates, Jordan, Egypt, Saudi Arabia, Iraq and Iraqi Kurdistan — has fanned speculations. The Kurdish source claimed that the American delegation wanted to meet with representatives of Turkey’s pro-Kurdish Peoples’ Democratic Party (HDP) following their talks with the Syrian and Iraqi Kurdish officials, yet the demand was vetoed by Ankara. The HDP officials, in turn, denied this claim, pointing out that the Kurdish minority in Turkey falls under the State Department’s Europe desk.

Another speculation is fanned by the timing of the delegation’s visit. The delegation, which was expected to hold talks in northeast Syria just after their contacts in Baghdad and Erbil on May 4-5, traveled to the region May 16. Turkish media reports linked the delay to the killing of the PKK militant. Daily HaberTurk claimed that Noureddin Sofi, who met with the Americans twice in the past, was also set to participate in the talks. Reportedly, aiming to assess the situation with the PKK command before the meeting, Sofi traveled to a PKK base near the Qandil Mountains in Iraqi Kurdistan. Turkish intelligence and armed forces launched a surveillance operation at six different points and killed the militant on his way back to Syria. On April 23, Turkey launched massive air and ground operations codenamed Claw-Lightning and Claw-Thunderbolt in northern Iraq, as part of a series of military campaigns against the PKK bases in northern Iraq.

Pro-Erdogan daily Yeni Safak claimed that Noureddin Sofi was Washington's “contractor in Syria,” arguing that he was excluded from the bounty list the State Department recently renewed for the three leaders of the PKK. Noureddin's “neutralization was a great blow to the US’ plans in Syria,” the paper said.

The Kurdish sources, meanwhile, refute these claims, arguing that the militant’s close affiliation with the PKK, which the United States was trying to distance from the YPG, was regarded as a problem by Washington.

Such speculations aside, the US officials’ visit might help to disperse uncertainties and frame negotiation areas on the Kurdish file ahead of the Biden-Erdogan meeting. The Syrian Kurds have long criticized US policy to limit its cooperation with the SDF on the military field with no political or diplomatic dimensions. Hood's participation in the talks have raised the expectations on that front. The US side has been trying to unify rival Kurdish factions in Syria and increase cooperation between the Syrian Kurdish groups and the Kurdish administration in Iraqi Kurdistan.

Yet the Kurds are well aware that the US ties with the Kurdish-led autonomous administration in northeast Syria are doomed to remain limited without some sort of reconciliation between Ankara and the Kurds. Thus, while the Biden administration’s support of the Syrian Kurds will continue, Washington will be unlikely to retract its greenlight from Turkey’s cross-border operations in northern Iraq.

According to Cemil Bayik, a senior PKK commander, the United States and European Union should pull out their support from Turkey in a bid to force Ankara to renew the peace talks between the Turkish authorities and the PKK. Lambasting Washington’s support of Ankara’s latest operations in Iraqi Kurdistan’s Avashin, Metina and Zap regions, Bayik said, “The United States is supporting the Turkish government in a bid to have Ankara accept its own policies.”

According to Hisyar Ozsoy, an HDP spokesperson, the nature of ties between the Biden administration and the Kurds will be dictated by the course of the Turkish-American partnership.

“I don’t think that there will be major changes in the traditional US policies in the Biden era," Ozsoy told Al-Monitor. "A settlement between the Kurds and Turkey is in the interests of the United States.”

Yet Ozsoy is not optimistic. The US position over the Kurds will be shaped by the talks between Ankara and Washington over major issues such as Turkey’s purchase of the S-400 missile defense system, he opined.

“Our expectation is the revival of the peace process,” Ozsoy said. “There are many people who support the peace process in the American bureaucracy but turning this into a political will and forcing Turkey doesn't seem possible given the current problems.”

Although the US delegation’s visit was a significant first, both Washington and the Syrian Kurdish officials know that Turkey will remain a major obstacle before political and diplomatic ties between the two sides.