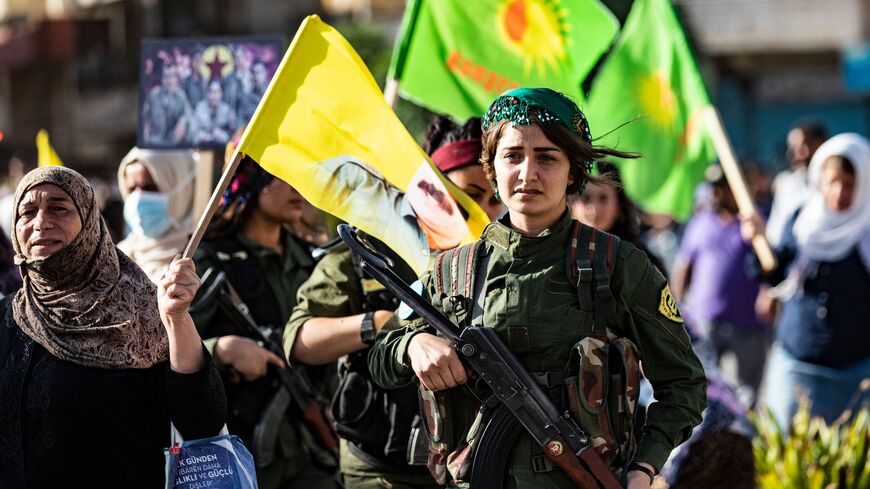 Syrian Kurds demonstrate on June 10, 2021, in the northeastern Syrian city of Qamishli against the Turkish offensive on Kurdistan Workers Party (PKK) areas in northern Iraq. - DELIL SOULEIMAN/AFP via Getty Images

Turkey’s military escalation against the Kurdistan Workers Party (PKK) has deepened the gulf between Syrian Kurdish groups and put the kibosh on US-mediated talks that were aimed at forging unity in northeast Syria between the ruling Democratic Union Party (PYD) and an array of opposition parties known as the Kurdish National Council (KNC).

In a series of interviews, each side blamed the other for the hiatus, which serves Turkey’s agenda of keeping its Kurdish foes divided and weak. It also discourages the United States from deeper political engagement in the affairs of Kurdish-led northeast Syria, where an estimated 900 special operations forces are deployed to aid in efforts to prevent the Islamic State from staging a comeback.

The finger-pointing comes amid a spate of arson attacks against KNC offices across the northeast that the latter has blamed on the Revolutionary Youth Movement (Ciwanen Soresger).

The organization sees itself as an enforcer of imprisoned PKK leader Abdullah Ocalan’s ideals and operates on the margins of the autonomous administration in northeast Syria in a gray zone outside its direct control. The KNC says at least eight of its offices, including those of parties operating under its umbrella, were targeted last month alone. PYD officials deny all responsibility, saying investigations into the attacks are ongoing and several suspects have been arrested.

The launching of the attacks coincided with Turkey’s latest offensive against the PKK in Iraqi Kurdistan called Claw-Lock, which aims to cut off the guerrillas simultaneously from the Turkish and Syrian borders as well as from their main headquarters in Qandil, which abuts Iran.

Salih Muslim, a top-ranking member of the PYD’s presidential council, told Al-Monitor, “We don’t know who these people [attacking KNC offices] are, but there is immense popular anger over Turkey’s attacks and there is a widespread perception that the KNC and their Roj peshmerga (forces) are fighting against the PKK together with the Turkish army.”

Muslim said at least 20 Syrian Kurds fighting within the ranks of the PKK had died in the Claw-Lock campaign so far. “We also hear of wounded Roj peshmerga being treated in [Turkish] hospitals in Hakkari and Yuksekova.”

Muslim repeated his claims from an April 20 interview with Al-Monitor that the autonomous administration had offered to provide security to guard the KNC offices, but that those offers had been spurned.

Sleman Osso, a member of the KNC Presidential Council, who is also secretary of the Yekiti Kurdistan Party-Syria, rebutted Muslim’s account. “The media noise that happened during the last campaign last month — there was a lot of noise from the American side and international bodies. So they tried to give the international community and press the idea that they put guards in front of our offices as if they don’t know who is burning these offices. But we know, and they know, that the Revolutionary Youth are the ones committing these violations,” Osso told Al-Monitor.

“The violations are ongoing from time to time. When there’s pressure on them, the violations stop. Then they feel freer and the violations start up. The goal is to scare Kurdish citizens, the KNC, and push them toward refusing negotiations,” he claimed.

He denied that Roj peshmerga, a Syrian Kurdish force that is linked to the KNC parties and based in Iraqi Kurdistan, were participating in battles against the PKK. “A few days ago, the peshmerga-Roj families in Kobani were summoned and threatened and pressured — asked to pressure their kids to leave the peshmerga,” Osso added without specifying by whom.

The unity talks were initiated by Mazlum Kobane, commander in chief of the US-backed Syrian Democratic Forces (SDF), in the wake of Turkey’s 2019 ground invasion of a swath of territory lying between the northern border towns of Ras al-Ain and Tell Abyad. The purpose from his vantage point was threefold. The first was to win broader legitimacy for the autonomous administration; the second to present a common front with the KNC in future talks with Damascus; and the third to weaken Turkish claims that the PKK is in charge of the area, with a view to fending off further attacks and ideally to developing amicable ties mirroring those between Turkey and the Kurdistan Regional Government (KRG) in Iraq. The latter reason served as an incentive for the US buy-in.

Washington’s own relations with Ankara were in a downward spiral because of continued American support for the SDF, which Turkey claims is also dominated by the PKK. A deal between the SDF and the KNC, which has close ties to the KRG as well as the Turkish-backed Syrian opposition, would help ease tensions, or so Washington believed.

But US policy now looks caught up in its own contradictions, as it silently endorses Turkish moves against the PKK in Iraqi Kurdistan while apparently hoping that Turkey’s attitudes toward Ocalan-aligned cadres, including Kobane, a former PKK commander, can change. Kobane is on Turkey’s “most wanted” list, and Turkey’s President Recep Tayyip Erdogan is growing more hawkish by the day.

As things currently stand, the most obvious parallel between Iraqi Kurdistan and Rojava (the Kurdish name for the Syrian Kurdish region) are the seemingly endless divisions besetting the main political groups, which play into their greater enemies’ hands.

SDF commander Kobane, however, has cut a very different figure, outgrowing his guerrilla fatigues to emerge as a political leader respected by Syrian Kurds, Arabs and Christians alike — one who is seen as the best guarantee for the continued presence of US forces in Syria.

“We all depended on him at the beginning of the dialogue. I see him now weakened,” said a senior KNC figure who asked not to be identified by name.

“General Mazlum is a highly effective diplomat who is endlessly pragmatic and open to compromise. This not only makes him a leader, it makes him an invaluable partner to the United States,” said an NSC official speaking on background to Al-Monitor.

In fact, the talks did get off to a good start with the PYD making most of the concessions at Kobane’s urging, as previously reported by Al-Monitor. Osso, who is a member of the KNC’s negotiating team, acknowledged that "the reason for the success was that the American side, and the SDF leadership, were serious about pressuring the other side to reach an agreement around a political vision acceptable to all Syrians."

Sources with close knowledge of the talks said it was the KNC that “got cold feet” with many speculating that they walked away in October 2020 under pressure from Turkey. This was mainly exerted via the Kurdistan Democratic Party of Iraq (KDP), which dominates the KRG and whose forces control the main border crossings between northeast Syria and Iraq through which coalition forces and critical aid are supplied.

It did not help that the KNC insisted that a final agreement should stipulate that the autonomous administration commit to purging all PKK elements from within its ranks.

“Why do we say the PKK and PYD need to be disconnected? Because we know that we can agree with the PYD when the PKK’s dominance of the PYD ends,” said Osso.

The KNC stance fed PKK suspicions that the talks had become a vehicle for its destruction.

Osso claims it was the PKK that sabotaged the talks. “After they noticed there was seriousness in reaching an agreement, at that point, PKK symbols started to [reappear] openly in Kurdish cities and towns. Provocations began in an attempt to tank the talks.”

Despite the setbacks, in June 2021, Kobane and David Brownstein, the State Department’s then resident envoy in northeast Syria, co-signed a document in which the sides committed themselves to continuing to serve as guarantors for the unity talks. (Kobane signed the document as “Mazlum Abdi,” the other name he goes by.)

The document, a copy of which was seen by Al-Monitor, stated that a new round of negotiations “begins from the point at which it stopped.” It also calls for ensuring “the non-repetition of violations against the Kurdish National Council in Syria, including encroaching on or burning its offices, and guarantee the non-arrest of its members for political reasons.” Osso, Muslim and a Biden administration source confirmed the document’s authenticity.

Osso said Kobane and Brownstein “promised to release this document to the media and then begin negotiations again. But the document was not published because of [the PYD’s] continued violations, and the document lost all of its meaning before it was announced to the public.”

The SDF did not respond to Al-Monitor’s request for comment.

In breaking their silence, the KNC appears to be drawing on the last and sixth article of the document, which entitles the side to publicly name and blame the other in case of any breaches. Osso said the KNC will not resume the talks unless the document is made public.

The fact that it is even willing to consider doing so points to several things. One may be that the KNC feels increasingly sidelined as the autonomous administration continues to lay the ground for elections in the northeast through a series of consultations with other stakeholders that are meant to culminate in the declaration of a new social compact. Another may be a shift in KRG’s own calculations.

But it’s the PYD that is now dragging its feet. A PYD official called Khabat declared recently that his party had paused the negotiations “because of the KNC support for the occupiers.” He was referring to Turkey. “If the KNC doesn’t stop supporting Erdogan’s [Justice and Development Party] and supporting the occupiers, and opposing Rojava — without stopping those things, the negotiations won’t continue.”

The State Department’s new resident envoy, Matthew Pearl, has met with the sides in a bid to restart the talks but has made little headway. “In the talks, he carries messages from one side to the other. But he has no strategy,” the senior KNC official complained.

“The United States government strongly supports Kurdish unity talks, and we remain in contact with parties on the best way forward to advance intra-Kurdish dialogue, including through our diplomats on the ground in northeast Syria,” a state department spokesperson told Al-Monitor.

“The Department of State condemned attacks on the KNC offices on April 21 and continues to play an active role in addressing grievances by both sides in order to increase stability in the northeast,” the spokesperson said.