The latest flare-up further hampers US efforts to resume peace talks between the two major parties. 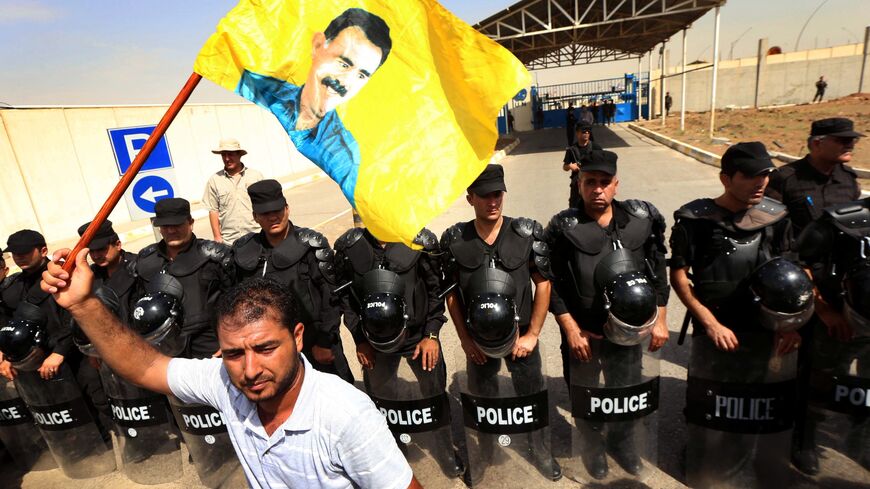 An Iraqi Kurdish supporter of the Kurdistan Workers Party (PKK) waves a flag bearing the portrait of Kurdish rebel leader Abdullah Ocalan outside the UN office in Erbil, the capital of the autonomous Kurdish region, on Sept. 20, 2014. - SAFIN HAMED/AFP via Getty Images

A top official from the Democratic Union Party (PYD), which shares power in the US-backed Autonomous Administration of North and East Syria, has refuted charges that it is behind a spate of arson attacks against offices of the opposition Kurdistan National Congress (KNC). Salih Muslim, a senior figure in the PYD’s presidential council, said, “We have no idea who is behind these attacks. Our security forces, the Asayish, have launched investigations to identify and catch the perpetrators. But we are certainly not linked to them in any way.”

The rebuttal follows calls from the KNC for the United States to intervene to halt the attacks. At least three attacks were reported in Hasakah, Darbasiyah and Malikiyah.

KNC officials said it’s office in the town of Kobane had been set on fire this evening along with that belonging to the Kurdistan Democratic Party of Syria (KDP-S).

“The PYD’s policy of intimidation against our people, the burning of offices of the Kurdish National Council and its parties, is taking place before the eyes of the international coalition and the [United States], which is militarily supporting these forces against us,” the KNC said in a statement.

The Hasakah offices of the KDP-S were also raided late Tuesday by a dozen gunmen who “intimidated party members and guests at gunpoint before burning the entire office down with Molotov cocktails,” the statement added. The attacks mirror prior raids on KNC offices in recent years.

The latest flare-up will have thrown a further wrench in US efforts to resume peace talks between the PYD and the KNC, seen as critical to the stability of the Kurdish-run enclave.

An earlier round initiated in late 2019 together with Mazlum Kobane, commander in chief of the Syrian Democratic Forces and the United States’ top ally in Syria, failed amid mutual recriminations.

The sides had agreed to cease all forms of violence with the eventual aim of striking a common stand on the future of the Kurds in Syria in direct or UN-sponsored peace talks with Damascus.

The attacks may also serve as ammunition for Ankara’s small band of allies in the State Department. A critical regional power and NATO member, Turkey’s stock has been rising since the start of Russia’s invasion of Ukraine.

US support for the Syrian Kurds and Turkey’s acquisition of Russian-made S400 missiles are the leading causes of the latest meltdown in US- Turkish ties.

The attacks on the KNC coincided with the launching of a fresh offensive on April 18 by Turkish forces against PKK fighters in Iraqi Kurdistan. The operation, codenamed Claw Lock, is being conducted from the ground and air, the latest in a series of campaigns aimed at degrading the rebels across Iraqi Kurdistan and targeting mid-level and senior leaders with armed drones. Both sides claim to have inflicted high casualties on the other.

Speaking at the parliamentary group meeting of his Justice and Development Party, Turkish President Recep Tayyip Erdogan said that the cross-border campaign aims to “rid Iraqi lands of terrorists and guarantee the security of our borders.”

Muslim speculated that the raids on the opposition parties in northeast Syria may have been prompted by the latest Turkish onslaught against their brethren next door. “The atmosphere is very tense here,” Muslim told Al-Monitor. He said that one reason for the anger directed at the KNC was the participation of a KNC-linked militia known as the Roj Peshmerga in the operation against PKK forces. Al-Monitor was unable to independently confirm the claim.

Muslim added that the Asayish had offered to provide security guards to the KNC and its affiliates, but that they had refused “because they do not recognize our administration.”

The KNC has close relations with Turkey and the Iraqi Kurdish leadership, notably with the Kurdistan Democratic Party of Iraq, presided over by Massoud Barzani and by his son Masrour, who is the prime minister of the Kurdistan Regional Government. The younger Barzani held talks with Erdogan and its spy boss, Hakan Fidan, in Istanbul on April 15. The meeting prompted fresh accusations of collusion between Turkey and the Barzanis against the PKK.

The meeting was planned at least three weeks ago, according to sources who spoke not for attribution to Al-Monitor. The PKK is locked in a bloody 36-year-old war against the Turkish army for what it says is greater political rights for Turkey’s long-repressed Kurds. The PYD has close links with the PKK and adheres to the ideological principles of the PKK’s imprisoned leader, Abdullah Ocalan. This has served as justification for repeated Turkish attacks against northeast Syria, resulting in the occupation of Afrin and swathes of other Kurdish-controlled territories.