Days after warning of a coming operation on Iraq’s Makhmour camp, Turkish President Recep Tayyip Erdogan said a senior Kurdistan Workers Party official was “neutralized” near the camp Saturday, underlining Ankara’s drive to put pressure on militants in the region. 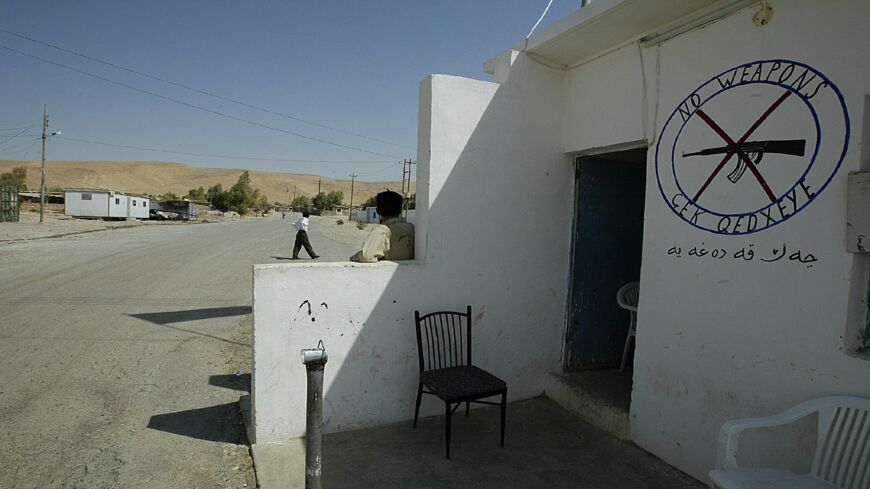 The entrance of the UNHCR Makhmour refugee camp, controlled by the PKK (Kurdistan Workers Party), is seen Sept. 4, 2003. Journalists have been barred from the site as well as all arms since PKK militants were banned from carrying arms by the United States in Iraq. - TARIK TINAZAY/AFP via Getty Images

ISTANBUL — Turkish President Recep Tayyip Erdogan announced on Sunday that a senior official with the Kurdistan Workers Party (PKK) was “neutralized” in an airstrike near the Makhmour refugee camp in northern Iraq.

In an attack on Saturday, senior PKK official and manager of the Makhmour camp Selman Bozkir was killed along with two additional individuals, according to Turkish and Iraqi security officials who did not elaborate.

The airstrike comes days after the Turkish leader warned of a coming operation on the camp, which he described as an “incubation center” for terrorism in a tweet on Sunday. Located about 180 kilometers (112 miles) south of the Turkish border, Ankara has long viewed the Makhmour camp of about 12,000 inhabitants as a safe haven for PKK militants and their sympathizers, many of whom are Kurdish citizens of Turkey who fled fighting in the 1990s.

The attack was one of Turkey’s deepest into Iraqi territory since it launched operations Claw-Lightning and Claw-Thunderbolt on April 23 to root out PKK militants along the Turkish-Iraqi border. Analysts tracking the ongoing conflict say the latest airstrike underlines Ankara’s drive to keep the pressure by all available means on Kurdish militants operating in the region.

“Turkey has the capacity of spotting these terror elements regardless of their geographical locations, and Turkey also has the capabilities of eliminating these targets,” Feyzullah Tuna Aygun, an Iraq expert for the ORSAM Center for Middle Eastern Studies in Ankara, told Al-Monitor.

The ongoing operations come as Erdogan and other high-level officials in Ankara claim Kurdish militants along Turkey’s southern borders with Iraq and Syria pose a security threat for Turkey. Since the 1980s, Ankara has fought an insurgency against PKK militants that has led to the deaths of more than 40,000 people.

Turkish officials have also repeatedly condemned US support for some Kurdish-led groups in military campaigns to eradicate the Islamic State from the region.

Following Saturday’s airstrike, Linda Thomas-Greenfield, US ambassador to the United Nations, said she had warned Ankara officials a day earlier against waging such attacks near Makhmour.

“Yesterday, I made clear to Turkish officials that any attack targeting civilians at Makhmour refugee camp would be a violation of international and humanitarian law,” Thomas-Greenfield tweeted on Saturday. “I’m deeply concerned about violence near the camp today and call on all sides to respect the rights of refugees.”

On the same day as the airstrike, five peshmerga soldiers with the Kurdistan Regional Government (KRG) were reportedly killed and seven others were injured during a confrontation with PKK militants in Dahuk province. KRG Prime Minister Masrour Barzani on Saturday condemned the incident in a tweet, as did the Iraqi Presidency in a statement in which it called the PKK’s presence in the region “unlawful.”

The event highlighted growing tensions between Kurdish militants and officials in Erbil and Baghdad, which Ankara has sought to facilitate in pushing its operations further into the region, according to Berkay Mandiraci, a Turkey analyst for the International Crisis Group.

“Turkish security units have been bent on capitalizing on recent tensions between the PKK and the KDP, aiming to drive a wedge between the two to weaken the former,” Mandiraci told Al-Monitor, using the acronym for the Kurdistan Democratic Party, which governs the KRG.

The discord between PKK militants and local officials comes as Turkey increasingly relies on intelligence operations backed by drone surveillance to penetrate territory it could not in the past and target higher ranking Kurdish militants.

Mandiraci said of the total militants Crisis Group research confirmed dead in the second half of 2020, about 18% were ranked as commanders. He also noted PKK-affiliated groups in or near Iraq’s Sinjar district have increasingly gained Turkey’s attention, as the area acts as a transit point for militants between Iraq and northeast Syria. But he said a significant Turkish operation in the region was not likely in the near term.

“While we may see more of these one-shot operations to take out critical PKK operatives, the multitude of actors entangled in northern Iraq, including the US and NATO, render a unilateral larger-scale offensive by Turkey unlikely,” Mandiraci told Al-Monitor.

“I think there is greater cooperation between the two countries [via Ankara, Baghdad and Erbil], and I think we’ll see this cooperation broaden in the future, possibly with a military operation against the PKK in Sinjar,” Aygun told Al-Monitor.