The rhetoric against Makhmour, a settlement where residents are overwhelmingly sympathetic to the Kurdistan Workers Party, could be part of a strategy to divert attention away from economic problems at home. 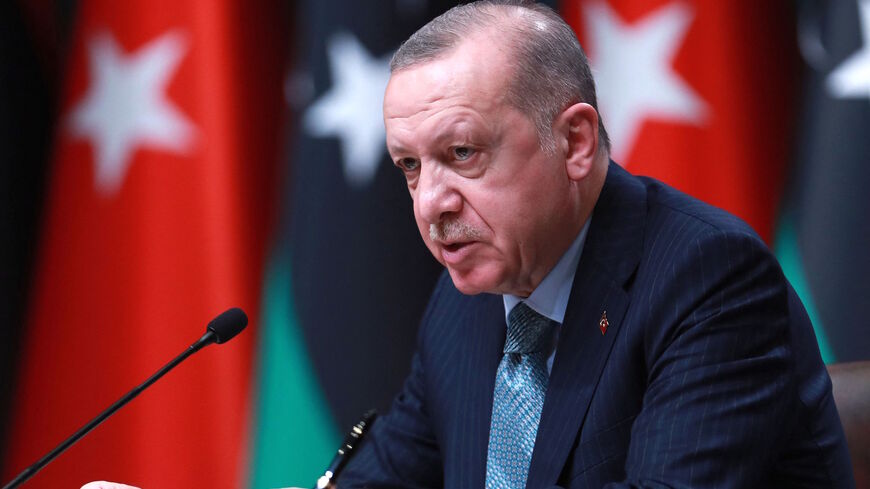 Turkish President Recep Tayyip Erdogan delivers a speech after a signing ceremony with Libyan Government of National Unity Prime Minister at the Presidential Complex in Ankara, on April 12, 2021. - ADEM ALTAN/AFP via Getty Images

Turkish President Recep Tayyip Erdogan has threatened to strike a refugee settlement in Iraqi Kurdistan on the grounds that it is a breeding ground for rebels of the outlawed Kurdistan Workers Party (PKK).

In a live interview on the state-run TRT news channel, Erdogan said that if the United Nations did not “clean it up, we will do it as a UN member.”

Erdogan claimed that Makhmour, which lies 180 kilometers (112 miles) south of the Turkish border, posed as grave a threat as Qandil, a mountain range straddling the Iraq-Iran border where top PKK commanders are based. “How long are we supposed to be patient?” he asked.

The warnings came as Turkish troops continue a large-scale offensive against the PKK along a mountainous strip of territory along Iraq’s border with Turkey. The aim is to disrupt the PKK’s access from Qandil to mobile bases dotting the length of the Turkish-Iraqi border all the way to northeast Syria where the PKK’s Syrian franchise runs an autonomous administration under the protection of the United States. The offensive also seeks to prevent the PKK from using those bases to launch cross-border attacks inside Turkey.

Turkey’s unremitting attacks using drones, fighter jets and special operations forces are squeezing the PKK like never before, with a growing number of middle-level and senior cadres getting picked off by armed drones. Iraqi Kurdish civilians caught in the crossfire have had to evacuate their villages in droves to avoid getting killed. There are no exact figures, but since Turkey began conducting cross-border operations inside Iraqi Kurdistan over three decades ago, dozens of civilians are thought to have perished along with hundreds of sheep.

The Kurdistan Regional Government (KRG) has tried to push back, pointing fingers at Turkey and the PKK alike, saying the latter’s presence has invited Turkish retaliation. But the KRG can only push Ankara so far. Turkey is the sole outlet for Kurdish oil exported via a pipeline running to the southern Mediterranean port of Ceyhan. As Turkey has over 5,000 troops deployed across the Iraqi Kurdish region — at least double the number of US forces in Iraq — it would be almost impossible for the Iraqi army, let alone the Iraqi Kurdish peshmerga, to dislodge the Turks at this point.

Arzu Yildiz, a Turkish journalist and fierce Erdogan critic who lives in exile in Canada, said she thinks Erdogan’s talk of attacking Makhmour is of a piece with his strategy of stirring nationalist anger to divert from the country’s snowballing economic problems, notably high levels of youth unemployment, rising food prices and a melting Turkish lira. “From the past till the present such operations are used to conjure enemies, to shift attention from Turkey’s real problems and to mobilize nationalist and religious sentiments to this end,” Yildiz said.

“The government stages such operations inside Turkey under the guise of combating the PKK or takes advantage of internal strife in countries like Syria and Iraq to carry out operations there. There is no evidence of any major PKK counteroffensive at this time,” Yildiz added.

It’s unclear, however, whether Erdogan can actually act on his threats to finish off Makhmour, which is more of a small town than a camp and is supported by the UN High Commissioner for Refugees. Turkey has repeatedly struck PKK military posts close to Makhmour but never the settlement itself that is inhabited by around 12,000 civilians who are overtly sympathetic to the PKK. It’s an open secret that it serves as something of a rest and recreation center for PKK rebels wounded in battle. Children are indoctrinated with PKK ideology at schools in Makhmour. Turkey has been trying to shut down the camp for years.

When Erdogan made the unprecedented move of launching negotiations with the PKK in 2009, repatriating Makhmour’s population — which fled there from Turkey in the early 1990s at the height of the army’s scorched earth campaign — was on the table. The latest stab at peace ended in 2015 together with a 2½-year long cease-fire. Egged on by his ultranationalist allies, Erdogan has since grown steadily more hawkish, occupying large chunks of Kurdish-controlled Syria as well.

Hishyar Ozsoy, a lawmaker for the pro-Kurdish Peoples’ Democratic Party, said if Erdogan could get the blessings of Baghdad and the United States, attacking the town of Makhmour “isn’t something he would not do.” Ozsoy told Al-Monitor, “For a long while Makhmour and Shingal have — alongside Qandil — been cited as targets by the Turkish government.” Shingal is another name for Sinjar, the Yazidi-dominated region overlooking Syria, which Turkey claims is a strategic foothold for the PKK.

An unnamed Iraqi official cited by Reuters said Turkey had complained last week to Baghdad about “terrorist activities” launched by the PKK “from their camp in Makhmour.” The official said security officials had sought to investigate claims but were denied access to Makhmour by PKK fighters. It’s unclear how the PKK would attack Turkey from Makhmour given its distance from the Turkish border.

“Instead of resolving the Kurdish matter through dialogue [the Turkish government] is determined to persist in its militarist policy, attacking everywhere, including civilian settlements and refugee camps,” Ozsoy said. “Rather than bomb Makhmour, the government should be responding to the question of why Makhmour was established to begin with and why tens of thousands of Kurdish citizens of Turkey are living in a refugee camps in Iraq.”