The early morning strikes comes as the Turkish opposition launched a march for justice and democracy today. 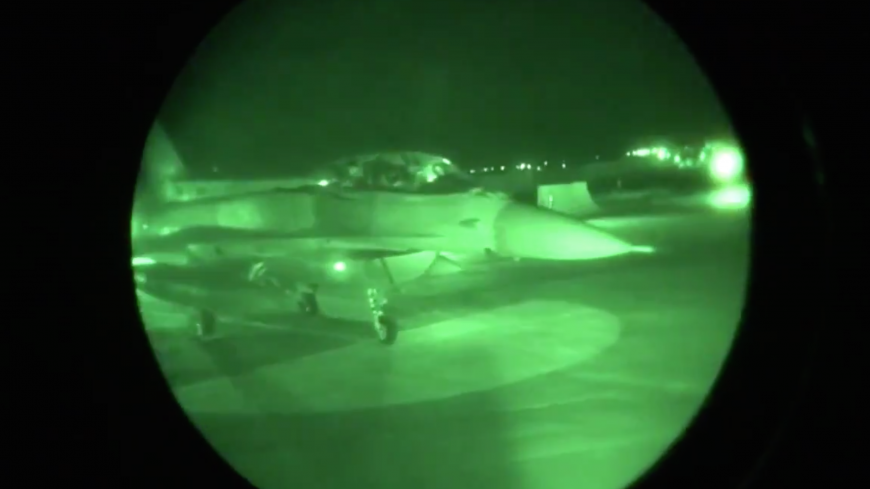 A video still shows Turkish military planes taking off to carry out strikes in Iraqi Kurdistan in a video released by Turkey's Defense Ministry on June 15, 2020. - TWITTER

Turkey has launched a wave of airstrikes against Kurdish militants in Kurdish-controlled northern Iraq, part of an ongoing campaign to destroy and degrade the group that has been battling the Turkish army on and off for Kurdish self-rule since 1984.

Turkey's Defense Minister Hulusi Akar announced that “terror hideouts” where attacks against “our country, our people, our police stations, our bases” were planned and carried out had been “razed to the ground” hours after Turkish jets bombed 81 separate targets.

“Our planes are bringing the caves down on the terrorists' head,” he said. The Defense Ministry shared images of the operation on Twitter.

The airstrikes targeting the outlawed Kurdistan Workers Party (PKK) in the area spanning the Yazidi-dominated Mount Sinjar to the west and the Qandil mountains to the east was the biggest such Turkish operation since 2015. Dozens of US-made fighter jets, locally manufactured drones and mid-air refueling and airborne communication aircraft were deployed in “Operation Claw-Eagle” that was launched late last night and supervised by Akar.

The pro-PKK Firat news agency said the strikes had targeted a UN-assisted refugee camp in Makhmour lying 50 kilometers (40 miles) southwest of Erbil, the capital of the Kurdistan Regional Government (KRG) that is home to more than 10,000 ethnic Kurds fleeing violence in Turkey since the 1990s. PKK-affiliated militias are stationed nearby.

The PKK said it had suffered no casualties and vowed “to respond in the strongest possible manner to all attacks on our forces.”

Bedran Pirani, co-mayor of Makhmour Camp municipality, told the Iraqi Kurdish Rudaw news outlet that the airstrike lasted a full hour from 12:10 to 1:10 a.m. local time. He said several children had fallen unconscious and had been rushed to the hospital. Pirani also said the airstrikes had caused “massive” material damage to the camp’s periphery. He did not elaborate.

A group of local leaders from Qandil, Makhmour and Sinjar are due to hold a joint press conference for the international press tomorrow.

In Sinjar, where the Islamic State unleashed its genocidal slaughter of the Yazidis in 2014, Turkey conducted extensive airstrikes targeting more than 30 locations of the Sinjar Resistance Units, a local militia that has cordial ties with the PKK.

Murad Ismael, executive director of the global Yazidi organization Yazda, told Al-Monitor in emailed comments, “The airstrikes caused emotional distress among the public, especially among the more than 7,000 internally displaced Yazidi inhabitants of the Sardashte camp on top of the mountain, which is located only one to two kilometers away from the targeted location of Chilmera.” He went on, “While there were, thank God, no casualties among civilians, such attacks are hindering all efforts for displaced Yazidis to return to their homes, while terrorizing civilians.”

Ismael said the Iraqi government “should either respond militarily against Turkey or take the necessary steps at the United Nations to hold Turkey accountable.” He continued, “Sinjar is an Iraqi district, sharing no border with Turkey. If Turkey has security concerns over Sinjar, it must discuss them with Iraqi authorities, not terrify a population still recovering from genocide. Sinjar poses no threat to Turkey.”

Iraq’s Defense Ministry condemned the strikes today, saying they were violation of Iraqi sovereignty, but the language of the statement was mild. “We call on Turkey to halt these violations and avoid repeating them and respect the bilateral relations between the two countries,” it said.

Ankara shows no signs of heeding Baghdad’s calls, chief among them to withdraw several hundred Turkish special forces who have been based in Bashiqa near Mosul since December 2015.

Its military and intelligence presence in Iraqi Kurdistan — despite occasional tut-tutting from KRG leaders — continues to grow. It’s believed to have around 20 bases of varying sizes in the region and since last year Turkish ground troops have been deploying in Kharkurk, where the Turkish, Iraqi and Iranian borders converge.

The Turkish army has pursued the PKK in northern Iraq for decades, both on the ground and from the air, causing the mass displacement of civilians, including a dwindling number of Christians in the border areas with Turkey. The PKK settled in the Qandil mountains separating Iraq and Iran in the early 1990s, benefitting from the vacuum left by Iraqi Kurdish forces who moved out at the end of the first Persian Gulf war when the United States established a no-fly zone over northern Iraq.

Turkey’s attacks against Sinjar are more recent and have grown increasingly lethal as Turkey refines its homegrown drone technology, honing in on what it describes as high-value PKK targets within Turkey as well.

Turkey says that Sinjar serves as a critical conduit for PKK cadres moving between their headquarters in Qandil on the Iranian border and northeast Syria, where the US-backed Kurdish administration is composed of numerous Syrian Kurds who are either currently or were at one time associated with the PKK.

PKK sources told Al-Monitor that on Saturday, Turkish planes struck mountains in the Ahmedi region east of Dohuk where veteran PKK commander Murat Karayilan is based.

The war has escalated since a two-and-a-half-year cease-fire between Ankara and the rebels broke down together with potentially game-changing peace talks in the summer of 2015, with both sides blaming the other.

Berkay Mandiraci, who monitors the conflict for the International Crisis Group, said the air raids have intensified since April 2019. Nearly 70% of all PKK fatalities confirmed by the ICG in 2020 occurred in northern Iraq, he told Al-Monitor. It also recorded more than 140 “seasoned PKK” fatalities since July 2015.

“It is too early to judge whether these strikes could usher in a new phase in Turkey’s PKK conflict, which in the last three years has remained relatively contained” in terms of the number of deaths, Mandiraci added.

On the political front, President Recep Tayyip Erdogan and his Justice and Development Party (AKP) government simultaneously unleashed a ferocious campaign to hobble the pro-Kurdish People's Democratic Party (HDP), detaining and prosecuting thousands of its members and sympathizers, including democratically elected lawmakers and mayors. This was after the HDP won seats in the Turkish Parliament for the first time in 2015, denying the AKP a majority, another first.

At the same time, Turkey has carried its war to northeast Syria, where it invaded the Kurdish-majority city of Afrin in January 2018. It gobbled a further chunk between the towns of Ras al-Ain and Tell Abyad in an assault greenlighted by the Donald Trump administration in October last year.

“At no time has the Turkish government’s crackdown on the Kurdish people been as wide and as comprehensive as it is today,” said Giran Ozcan, the HDP’s Washington representative. “Kurdish elected members of parliament, mayors and journalists are being imprisoned, and Kurds in Syria and Iraq are being bombed,” Ozcan told Al-Monitor via WhatsApp. “I see myself as a moderate Kurd looking for a modest solution to the Kurdish problem. With each passing day, I am finding it more difficult to stay committed to this position.”

Ozcan reckons the current attack in Iraqi Kurdistan is connected to the “Justice and Democracy March” launched by the HDP in Turkey today. HDP lawmakers and supporters set off from Edirne in the far west of the country, where former HDP co-chair Selahattin Demirtas has been imprisoned since October 2016 on thinly supported terrorism charges, and from Hakkari in the far east, where HDP lawmaker Leyla Guven was elected to the parliament, only to be stripped of her seat along with another HDP parliamentarian on June 4.

The march, which is meant to culminate in the capital Ankara on June 20, got off to a stormy start as police erected barricades and fired rubber bullets and tear gas on a group headed from Silivri to Edirne. At least 10 people were detained.

In the city of Van near the Iranian border, police laid siege to HDP headquarters. As Al-Monitor went to press, there were reports of mass detentions and of lawmakers being struck by police. HDP co-chair Mithat Sincar was reportedly among those targeted by police, the Mezopotamya news agency reported.

Hishyar Ozsoy, an HDP lawmaker from Bingol, told Al-Monitor there was “no doubt” that the airstrikes in Iraqi Kurdistan and the HDP’s march “are connected.” Ozsoy noted that Turkey’s recent economic troubles have been made significantly worse by the COVID-19 pandemic, rendering the AKP increasingly desperate. “They are melting like ice cream” in recent opinion polls, he said, adding, “Bombing [Sinjar] doesn’t help fill empty stomachs in Istanbul.” (Recent opinion polls show support for Erdogan and the AKP is dropping.) History has shown, “this isn’t a fight they can ever win” and can only be resolved through peaceful negotiations, Ozsoy concluded.