The events surrounding the Feb. 17 bombing in Ankara have sparked a furor against Kurdish members of Turkey’s parliament as many political forces threaten to shut them out of the political scene. 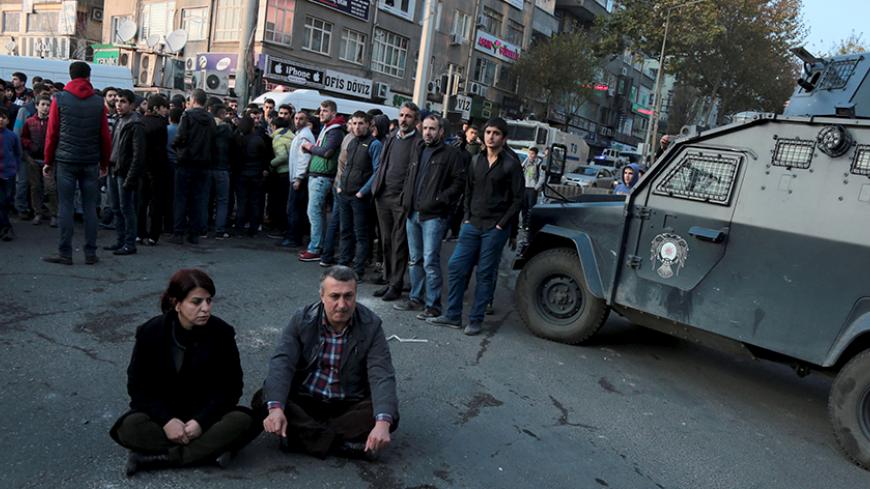 Sibel Yigitalp (L), a parliamentarian from the pro-Kurdish Peoples' Democratic Party, and Abdullah Akengin, a former local mayor, hold a sit-in protest against the curfew in Sur district, in the southeastern city of Diyarbakir, Turkey, Dec. 18, 2015. - REUTERS/Sertac Kayar

A female deputy of the Kurdish-dominated Peoples’ Democratic Party (HDP), Tugba Hezer, is a heated topic of discussion in Turkey these days. She paid a controversial condolence visit to the family of Abdulbaki Somer, the suicide bomber who struck Ankara on Feb. 17 and killed 29 people, most of them military officers. Readers outside Turkey may find this strange, for what is normally debated at length is the attack itself and the organization and reasons behind it.

Senior government officials, led by President Recep Tayyip Erdogan and Prime Minister Ahmet Davutoglu, have been lashing out at Hezer for days, triggering efforts to strip HDP lawmakers of their parliamentary immunity.

The media and the main opposition People’s Republican Party have reacted in a similar hard-line fashion. Echoing Erdogan’s statements, pro-government newspapers trumpeted in almost identical headlines Feb. 25 that Hezer was “not a lawmaker but a terrorist,” that “the nation has lost patience” and that action should be taken against the HDP. The pro-government press was not alone. Even columnist Ahmet Hakan, one of the most popular names in the mainstream media who seemed quite sympathetic to the HDP prior to the elections last June, joined the chorus, going as far as to sarcastically call on HDP deputies to become suicide bombers themselves.

Ankara had first blamed the bombing on the Syrian Kurdish People’s Protection Units in an apparent bid to legitimize intervention against the Kurdish region in Syria. Soon, however, the Kurdistan Freedom Falcons (TAK) — a shadowy group that some say is a hard-line splinter of the armed Kurdistan Workers Party (PKK) and others see as a PKK front — claimed the attack. The government nevertheless took the opportunity to attack the HDP, which it has been trying to equate with the PKK ever since the elections. The first opportunity came when the HDP refused to sign a joint parliamentary declaration condemning the bombing. The Justice and Development Party (AKP), however, had to find another pretext when the HDP said it would join the condemnation provided that four bomb attacks blamed on the Islamic State since June were also mentioned.

It was at that time when Hezer made her controversial visit, providing the government with a pretext to pin the Ankara massacre on the HDP. Erdogan urged the lifting of parliamentary immunities from HDP deputies on the grounds they supported terrorism. His call was quickly translated into action, and files concerning 11 deputies — most of them HDP members, including the party’s two co-chairs — were sent to the parliament as a first step. The parliament, currently busy with budget debates, is expected to take up the issue in the coming weeks.

Hezer, the woman in the eye of the storm, is the parliament’s youngest member. She was born in the eastern province of Van in 1989, five years after the PKK began its armed campaign. As a Kurdish child growing up in the midst of a war, she belongs to a generation that is often seen as more radical. Prominent Kurdish politician Serafettin Elci, who died in 2012 at the age of 74, famously said shortly before his death that his was the last generation of Kurds with which Ankara could have a dialogue to resolve the Kurdish problem.

Yet by running in the elections, Hezer has opted to strive for a political solution to the Kurdish problem, even though she comes from a family with a tragic past. Last week, journalist Gunay Aslan recounted Hezer’s family story, writing that her ancestors were among victims of the 1930 Zilan massacre in Van, one of the bloodiest crackdowns on Kurds in the history of the Turkish Republic. Hezer’s elder brother was one of the first Kurds in Zilan to join the PKK's ranks, in which he lost his life, while her elder sister is still a PKK member after 20 years with the group, according to Aslan. The journalist wrote, “Tugba Hezer hails from Zilan, where 15,000 innocent people, including her ancestors, were brutally massacred. Hence, she stands right in the heart of the Kurdish problem of the Republican era and addresses us from there. One has to see her from where she stands and try to understand her without judging, blaming and insulting her.”

Interestingly, Hezer and TAK bomber Somer were born in the same year in the same province. Despite the baggage of the Zilan massacre and her siblings in the PKK, Hezer chose to enter the parliament with the HDP, which struggles for a democratic settlement to the Kurdish problem. Somer, on the other hand, believed in an armed solution and joined TAK. Somer represents a Kurdish segment that validates Elci’s argument, while Hezer represents another that debunks it. And that’s where the tangle lies: The AKP has come to lump together Kurds advocating democratic politics with those who favor violence, just as its predecessors did in the 1990s.

The year Hezer was born, seven Kurds became parliament members on the ticket of the Social Democratic People’s Party (SHP). They were soon expelled from the party for attending a pan-Kurdish conference in Paris, which eventually led them to create the People’s Labor Party (HEP), the predecessor of the HDP. From the day of its creation, the HEP was equated with the PKK, even though PKK leader Abdullah Ocalan denied any “organic links” between the two and faced pressure to push it out of the political arena.

The records from HEP’s congress in September 1992 show that what HEP members advocated at the time is almost exactly the same thing HDP deputies say today: basically, that Ankara should seek to reconcile with the PKK, end the armed conflict and find a political solution. The headlines in the press the following day in 1992 were also familiar, accusing the HEP of being a PKK front. And the attitude of the political leadership was no different from how the incumbents reacted after the Ankara bombing. Then-Prime Minister Suleyman Demirel, for instance, urged the judiciary to act, and responding to a call for the PKK to be legalized, said, “Whoever backs the PKK is actually advocating the bloodshed.” Not surprisingly, the HEP was outlawed in July 1993.

The HEP’s closure marked an escalation in the so-called low-intensity war in the southeast, claiming tens of thousands of lives in the 1990s. Kurdish deputies were expelled from the parliament and some, including the iconic Leyla Zana, landed in jail with lengthy sentences. Still, the Kurdish parties that succeeded the HEP grew stronger by the day. After the initial parliamentary breakthrough with the SHP, the HEP had come to hold 21 parliamentary seats, while the HDP clinched 80 on June 7, 2015.

So the question now is: Will Turkey’s political establishment choose to draw a line between the two currents represented by Hezer and Somer or lump them together and try to oust the Kurdish political movement from parliament once again? And if the HDP is sidelined, will history repeat itself with the war escalating anew, dragging on for years and claiming thousands of more lives? Can the AKP pressure curb the steady, 26-year rise of the Kurdish political movement? If Ankara does bring back the 1990s, this will cost many more lives, while the HDP will continue to strengthen. 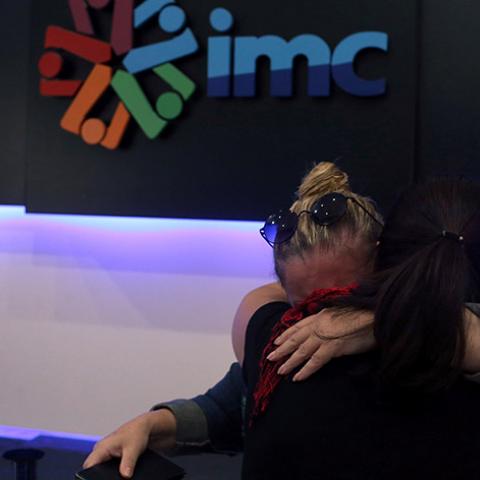 The death of critical journalism in Turkey