Turkey finds out one is the loneliest number

The regional and global loneliness Ankara dragged itself into with its foreign policy since 2009 is becoming hazardous with the threat from the Islamic State. 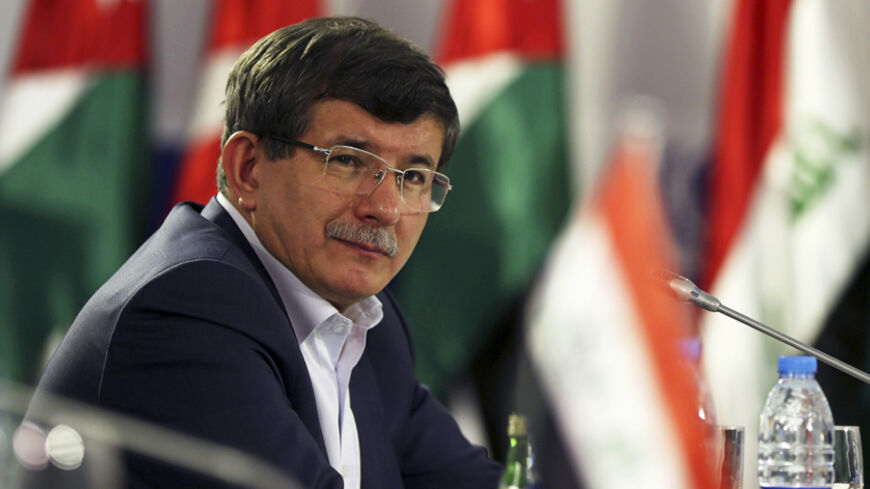 Turkish Foreign Minister Ahmet Davutoglu attends the opening of a meeting of foreign ministers at the Zaatari refugee camp in the Jordanian city of Mafraq, near the border with Syria, May 4, 2014. - REUTERS/Muhammad Hamed

The Justice and Development Party (AKP) leaders who have ruled Turkey for the past 12 years generally ignore and sometimes deny the criticism that they have pushed Turkey into loneliness in the region and the world because of their foreign policies.

There is only a single reference of AKP officials accepting — with reservations and justifications of course — that they are the architects of Turkey’s loneliness. It is a 140-letter Turkish declaration in August 2013 in social media by Ibrahim Kalin, then-chief adviser to the prime minister. His tweet read: “The claim that Turkey is alone in the Middle East is not correct. But if this is a criticism then we must say. This is precious loneliness.”

The godfather of this so-called concept of “precious loneliness,” Kalin was appointed deputy secretary-general of the presidency after Recep Tayyip Erdogan was elected president. But AKP circles did not adopt his concept, and the child was abandoned and hoped to be forgotten.

This so-called preciousness Kalin attributed to Turkey’s loneliness could at least have had some boast of "standing on the right side of history at the risk of isolation and adhering to ethical superiority."

But in international relations, loneliness means the inability to set up alliances and failure to persuade international organizations to take action. To assert that this loneliness is an asset for Turkey is nothing more than a futile attempt at spin-doctoring.

I noted in an international meeting in Bodrum on Oct. 17-19 that Kalin’s “precious loneliness” concept, which was received with cynical smiles by the world at the time, has not been forgotten despite the passage of time.

A senior Western security official who was attending the 10th “Bodrum Round Table,” organized by prestigious Istanbul-based think tank Center for Economics and Foreign Policy Studies (EDAM), when talking on the unwillingness of Turkey to join the anti-IS coalition, posed a question: “Is Turkey being dragged to a dangerous loneliness?” I later found out that this “dangerous loneliness” warning by this official who didn’t want to be identified was actually a predetermined message. It wasn’t spontaneous. If Turkey’s loneliness really needed a modifier, that would obviously be not “precious” but “dangerous.”

To be in danger is in the nature of Turkey’s loneliness. Turkey with its policies, until the eruption of the IS crisis at its southern border, had already sentenced itself to loneliness in the region and world. Ankara, by exaggerating its affinity to the Muslim Brotherhood in its reactions to the July 3, 2013, coup in Egypt, had already confronted the new administration in Cairo as well as Saudi Arabia and the United Arab Emirates. Ankara’s Gaza and Hamas-focused Middle East policy had become a factor blocking a satisfactory solution to efforts of normalizing relations with Israel that were severed after the 2010 flotilla incident. After 2011, Ankara’s Syria policy, which sought to topple the Damascus regime and replace it with a Muslim Brotherhood-dominated government, brought Turkey into confrontation with Damascus-Baghdad-Tehran. As a result, the only country in the Middle East that Turkey has an alliance with is Qatar.

The AKP government opted to distance Turkey from the EU perspective and in general terms from the West and orient it to the Middle East as a strategy compatible with Ankara’s internal and external politics. The outcome was loneliness also in Europe.

In the General Assembly vote for two-year UN Security Council membership on Oct. 17, Turkey’s resounding defeat with 60 votes (against 132 votes for Spain) was noted as a dramatic illustration of Turkey's loneliness in international organizations as well.

Before Ahmet Davutoglu became foreign minister in 2008, Turkey received 151 votes to become a Security Council member for a two-year term.

Clearly, the Turkey of 2008 wasn’t the same as the Turkey of 2014. The Turkey of 2014, with the ideologically based foreign policy of the Erdogan-Davutoglu duo, had shifted from the goal of “zero problems with neighbors” to “zero neighbors, many problems.” This Turkey has to cope with all the problems of Middle East instability and regional chaos.

And Turkey faces a new threat internally and along its southern border that emanates from its Syria policy. I am of course talking of the Islamic State (IS). As the threat of IS grows, this is how Turkey’s loneliness becomes more menacing:

If Turkey in its haste to depose the Damascus regime as soon as possible had not turned a blind eye to the country's becoming an "international jihadist corridor" between Syria and rest of the world, and if Ankara had prevented jihadists from using our country as a rear logistics base, then IS could not have gained so much strength and now threaten to capture the Kurdish canton of Kobani in Syria.

Ankara since the autumn of 2012 not only imposed an embargo to foil Kurdish autonomy in Syria, but also stage-managed a proxy war through Islamic opposition groups.

When Ankara persisted with its refusal to join the coalition formed under US leadership against the IS threat even at the most critical phases of the Kobani siege, it became evident how dangerous Turkey’s loneliness could be for its own national security.

The Kurdistan Workers Party base in Turkey held Ankara responsible for the disaster facing the Kobani Kurds, with whom they have family and political-ideological links, and responded with an organized, widespread protest action that included extreme street violence: 50 people were killed, thousands of vehicles, houses, schools and businesses were destroyed and hundreds were hurt.

In the course of four days that went down in Turkish history as the “Kobani incidents,” Turks and Kurds for the first time faced each other with intense fury. We realized that there was potential for civil war in the country.

If Turkey, instead of taking cover behind an ambiguous policy, had displayed a clear-cut political and ideological choice against the IS threat and acted as an active member of the international coalition — in other words, had not opted for loneliness — the Kobani crisis would not have assumed the dimensions now threatening the national security of the country.

A week after those incidents, the Western security official who had warned about Turkey’s slide to dangerous loneliness asked these questions:

“How does Turkey want to spread its influence in the region? By Islamism, by economic integration or by offering assurances of its adherence to the Western institutions?”

Ankara doesn’t appear to have grasped the reality that it cannot spread its influence by Islamism, which, to the contrary, would only increase its loneliness even more menacingly.

We now have an Ankara that is simultaneously trying to overthrow the regime in Syria, while appearing to be trying to make peace with its own Kurds, trying to defeat their Syrian extensions by conducting a proxy war and pretending to be a member of the anti-IS coalition, while getting along with IS.

Ankara looks like a juggler who is tossing five balls at the same time. But while trying to keep them all in the air, Ankara is dropping the balls.

This is what perilous loneliness is all about.