Many believe that if Erdogan is further empowered, Ankara’s foreign policy will remain turbulent. 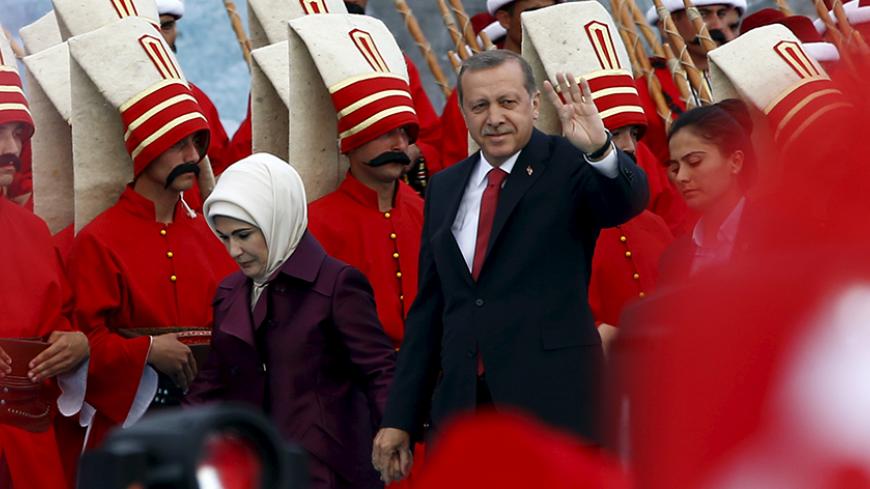 Turkish President Recep Tayyip Erdogan, accompanied by his wife Emine Erdogan (L), greets his supporters as he arrives at the a ceremony to mark the 562nd anniversary of the conquest of the city by the Ottoman Turks, in Istanbul, May 30, 2015. - REUTERS/Murad Sezer

Turkey faces what some say will be the most important elections in its recent history. What's at stake is nothing less than Turkey’s already troubled democratic system. President Recep Tayyip Erdogan wants to use these elections to introduce an unencumbered presidential system that will make him the country’s sole leader who is only nominally answerable to parliament.

Given his blatantly authoritarian tendencies, many Turks are worried about the prospect that Erdogan may have his way if the ruling Justice and Development Party (AKP), which he once headed and whose “spiritual leader” he remains, should win a major victory.

Many outside Turkey, particularly in the West, having observed Erdogan’s abrasive manner in dealing with international matters, and the overtly Islamist and anti-Western tone he employs, are concerned about the direction Turkey’s foreign policy will take in such an event.

Polls indicate that the AKP will fail to get the number of parliamentary seats to fashion a constitution on its own that meets Erdogan’s requirements. The likely outcome, according to many analysts, is that the AKP will win enough seats to form a government, but will come out of the elections weakened. Another possibility is that it will be forced into forming a coalition or a minority government.

Following the Arab Spring, Ankara’s foreign policy calculus has been based increasingly on an Islamist outlook with heavy Sunni leanings. Up until then Turkey appeared to be forging a visionary foreign policy based not only on deepening its democratic “European perspective,” as a candidate for EU membership, but also on developing ties with the Islamic world that suggested it could be a model for the Arab world by proving that secular democracy and Islam are compatible.

In the meantime, Ankara’s harsh stance against Israel over its attacks on Gaza — most notably after Erdogan gave Israeli President Shimon Peres a dressing down at Davos in January 2009 — may have raised Western eyebrows but increased Turkey’s appeal in the Arab world.

The tide, however, began to turn with the Arab Spring due to misplaced expectations of the AKP government, in Syria and Egypt in particular. Erdogan, who was prime minister at the time, saw an opportunity in the uprisings aiming at bringing administrations led by the Muslim Brotherhood to power. As his Islamist-based ideological outlook got the better of him he started to lavish the Brotherhood and its affiliates from Cairo to Tripoli with support, while the emphasis on pluralistic democracy and secularism was pushed to the back burner.

Meanwhile, Arab regimes that managed to ride out the Arab Spring were increasingly annoyed with Erdogan for his advocacy of the Muslim Brotherhood, which they see as a threat to their own movements. Boiling democracy down to the results of the ballot box and injecting an Islamist bent to Turkey’s foreign policy eventually undermined what respect Erdogan may have enjoyed in the West and the Middle East, albeit for different reasons.

The support Saudi Arabia and other Arab regimes gave to the coup in Egypt in 2013 was the first shock to Erdogan, still prime minister at the time. Erdogan was caught off-guard when these regimes not only backed the coup against Egypt’s democratically elected President Mohammed Morsi, but also supported Cairo’s criminalizing of the Muslim Brotherhood.

Erdogan’s continued advocacy of Morsi and the Muslim Brotherhood also resulted in a loss of Ankara's influence in the Middle East, where it once hoped to be a major player. Turkey became an unwanted interloper in the affairs of Arab countries, which is where it largely stands today despite some recent efforts to reset ties with regional countries, most notably with Saudi Arabia.

During the same period, Ankara’s abandoning of its traditional nonsectarian position in favor of blatantly pro-Sunni policies from Iraq to Yemen also clouded Ankara’s ties with Iran, which remain frosty today. In the meantime, Ankara’s Islamist orientation and the strong anti-Western positions taken by Erdogan had already resulted in Turkey’s alienating its traditional Western partners and allies.

The AKP government has tried to put a positive spin on this state of affairs for the sake of its Islamist grassroots supporters. It claims it is pursuing an ethical foreign policy, even if this has resulted in what it refers to as “precious loneliness.” The connotation is that Turkey is isolated today for the right reasons, because it has been taking moral stances on international issues that do not suit cynically calculating regional and global powers.

This may appear to be a good stance for AKP supporters. There is, however, little that is “precious” about this isolation that left Ankara with little say in regional developments, even where these have had serious fallout effects on Turkey. This is clearly seen in the fact that radical groups like the Islamic State (IS) or Jabhat al-Nusra are at Turkey’s doorsteps today, while the massive influx of refugees from Syria continue to pose serious social problems for Turks.

The question now is whether the June 7 elections will produce a new foreign policy orientation that will not only restore Turkey’s reputation in the West, but also reinstate its influence in the Middle East, or whether it will mean more of the same.

Retired Ambassador Umit Pamir, a member of the High Advisory Board of the Global Political Trends Center attached to Istanbul’s Kultur University as well as a member of the Board of Wise Men at the Istanbul Based Center for Strategic Studies, believes that a strong turnout for the AKP will mean continued turbulence for Turkey’s foreign policy.

“If Erdogan’s presidential ambitions are kept alive one way or another as a result of these elections, his influence over foreign policy will continue,” said Pamir, who has also served as chief foreign policy adviser to two prime ministers in the past. He said this will result in the AKP maintaining its religious-based foreign policy orientation, which will continue to push Turkey away from the West.

“But as Turkey finds it is moving more and more toward the Middle East, having alienated the West, it will also be left largely on its own when it tries to cope with the negative consequences to itself from the turmoil in this region,” Pamir told Al-Monitor. “If the AKP loses support, though, or ends up having to form a coalition government, then it will obviously have to tread much more cautiously with regard to foreign policy, particularly with regard to regional issues that have ramifications in Turkey, such as the crisis in Syria.”

According to a senior Western diplomat in Ankara, who spoke on condition of anonymity because of his sensitive position, what the West is looking for from Turkey in these elections is for a “reliable partner and ally” to emerge in a turbulent part of the world that urgently needs to be stabilized. He too believes that this is unlikely in the event Erdogan is further empowered.

“The best outcome appears to be one where Erdogan’s ambitions are curbed, but where [Ahmet] Davutoglu nevertheless manages to form an AKP government, or heads a coalition government, which will have to move back to the middle ground in terms of foreign policy by factoring in the demands of those who did not vote for the AKP,” the diplomat told Al-Monitor.

He added that if Erdogan is the loser June 7, this would lower his overbearing shadow over the AKP in time, enabling the next prime minister — whether this is Davutoglu or someone else from the AKP — to steer Turkey toward more realistic foreign policy positions that help Ankara out of its present isolation, and reinstate it as an important player that can contribute to stability in the Middle East.