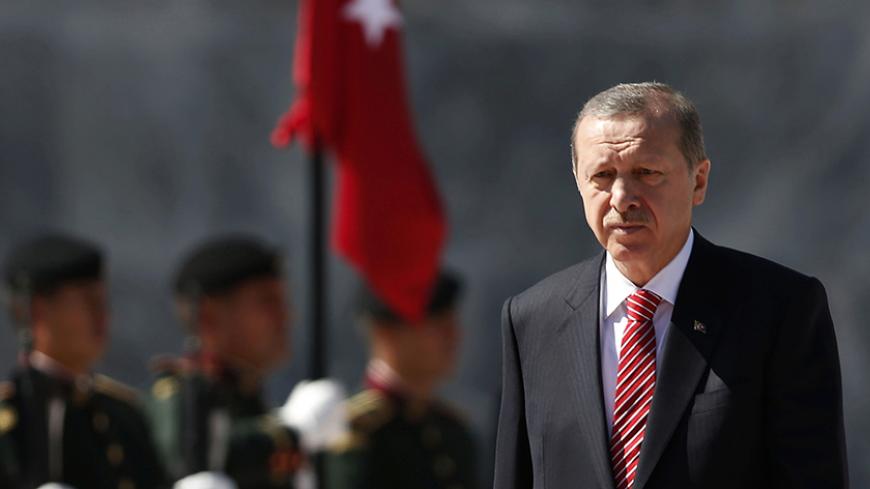 Turkish President Recep Tayyip Erdogan remains one of the most controversial world leaders today. His angry remarks, which are laced with moralistic arguments and aimed at countries both east and west, have left him largely isolated internationally. Since he is the one calling the shots in Turkey today, this has also severely harmed Ankara’s potential as a regional player.

Erdogan nevertheless remains unperturbed and defiant. While returning from a trip last week to Colombia, Cuba and Mexico — countries that actually have little to do with Turkey — Erdogan acknowledged to reporters on his plane that he was isolated, claiming this was due to “jealousy.”

“I don’t care about being left alone in the world [the term he used can also mean ‘I could care less’],” Erdogan said in response to a question, adding that only public support was important for him. He said the public “clasped [him] to its bosom” during the presidential elections in August 2014.

Erdogan maintained that he also enjoys the support of ordinary people around the world. “When you look at people, there is no loneliness. There might be as far as leaders are concerned, but that is the result of jealousy and nothing else,” Erdogan said. He admitted, as an aside, that he no longer has the good relationship with US President Barack Obama he initially had.

Erdogan’s remarks indicated, however, that he will not change position on issues like Israel, Syria, and the fact that the UN is effectively under the control of five permanent Security Council members.

He continues to vilify Egyptian President Abdel Fattah al-Sisi for ousting elected President Mohammed Morsi and the Muslim Brotherhood-led government. Syria’s Bashar al-Assad, on the other hand, remains, for Erdogan, an international criminal who should be tried for the deaths of hundreds of thousands of his people.

Given his political ambitions at home, Erdogan appears justified from his own point of view in maintaining a populist stance. His blasting at Israeli President Shimon Peres at Davos in February 2009, when he accused Israel of being an adept killer of innocent Palestinians, his harsh criticism of Sisi and Assad, and his backing of the Muslim Brotherhood and Hamas have consolidated his support base among Turkey’s conservative masses.

Erdogan’s chief policy adviser, Ibrahim Kalin, has even coined a phrase for Ankara’s international isolation, referring to this as “precious loneliness,” and arguing that it stems from “Turkey’s principled and ethical stance” on international issues.

“Precious” as this “loneliness” may be for Erdogan’s supporters, it has left Ankara as a nonplayer, even in crises that have Turkey bearing the brunt, with Syria providing a stark example.

Erdogan, who has made his antipathy for the West apparent, considers Putin a fellow traveler in this respect. He even admitted — half seriously, half jokingly — in the past that if Russia helped Turkey join the Shanghai Cooperation Organization, he would gladly end Turkey’s bid to join the EU.

Erdogan has also blasted at countries, even criticizing the pope, for receiving Sisi as an honored guest, because this provides him with international legitimacy. That legitimacy clearly took a leap forward with Putin’s Cairo visit. Erdogan’s position on Syria is also at odds with Putin’s position. But his need to remain friendly with Putin ensures Russia is spared his barbs.

Another development bound to compound Erdogan’s annoyance is the fact that Sisi raised his stature further in Western eyes following Egyptian airstrikes against Islamic State (IS) targets in Libya to retaliate for the decapitation of 21 Egyptian Coptic Christians.

The Egyptian strikes come at a time when Jordan, Saudi Arabia and the United Arab Emirates are also actively engaged against IS. Turkey, however, remains a reluctant ally and refuses to take part in these operations.

Turkish Chief of the General Staff Gen. Necdet Ozal will attend this week’s meeting of the anti-IS coalition in Saudi Arabia, but Turkey is not expected to change its current stance on the war against this group. Yalcin Dogan, the veteran political commentator, argued in his column in daily Hurriyet on Feb. 17 that this stance has reduced Ankara’s value as an ally for the United States and NATO.

“Turkey is out,” Dogan said, pointing to the fact that the Washington’s new National Security Strategy paper refers to new allies and friends in the region, but makes no reference to Turkey in sections where it should normally be mentioned.

The fight against IS has also diverted attention from Assad, Erdogan’s other nemesis, who is also fighting IS. Assad’s proven staying power is also making key international officials admit that he will have to be part of a Syrian solution. Not surprisingly, remarks such as those by the UN’s special Syria envoy Staffan de Mistura indicating that Assad has to be part of efforts to ease the violence in Syria anger Erdogan.

Talking to reporters while flying back from Mexico last week, Erdogan said that “350,000 people died in Syria. Are we not to question this? They are still thinking of continuing with Assad. Are we not to respond to this?”

Such moral indignation contributes little to making Turkey a realistic player in the Middle East even if it is welcomed by Erdogan supporters. Meanwhile, Ankara continues to retreat from the region. Although it prided itself once for being the last country to pull out of crisis-ridden Islamic countries, arguing that its peaceful efforts as a neutral player ensured it was respected by all sides, Turkey decided last week to close its embassy in Yemen.

Turkey’s ties with Saudi Arabia and other Gulf States, with the exception of Qatar, on the other hand, remain frosty due to Erdogan’s advocacy of the Muslim Brotherhood and Hamas, which are seen as threats by the regimes of these countries.

A Western diplomat in Ankara, who wished to remain anonymous due to his sensitive position, told Al-Monitor that Erdogan fails to see that the “democracy train,” which he hoped would bring the Brotherhood to power across the region, has departed for the foreseeable future. “The aim today is to return the region to the best semblance of stability that is realistically possible and this requires dealing with current leaders,” he said.

Suha Umar, a former Turkish ambassador to Jordan who is with the Ankara-based Turkish Asian Center for Strategic Studies, points out that Turkey is not in any of the major international discussions about the Middle East today. “Erdogan has resigned himself to this. He is only concerned about domestic public opinion and the general elections in June,” Umar told Al-Monitor.

“This, however, is a dangerous situation in terms of Turkey’s vital security interests. Take, for example, reports concerning the arms supplied by Germany to the Iraqi Kurds,” he added. His reference was to reports alleging that arms sent by Germany to the peshmerga had been transferred to the Kurdistan Workers Party, which is outlawed by Turkey as a separatist terrorist organization.

Huseyin Bagci, who heads the international relations faculty at Ankara’s prestigious Middle East Technical University, believes that Turkey is not a country that can afford to remain isolated. “This is the first time this has happened, because Turkey strayed from its traditional policies,” Bagci told Al-Monitor.

“Erdogan’s narrative concerning this isolation may be good for him politically, but no one takes an isolated country seriously,” he added. “If Turkey becomes a presidential system, Erdogan will have to become friends with everyone for the sake of the country’s interests,” Bagci said, referring to Erdogan’s desire to turn Turkey into a presidential system.