Will Davutoglu say anything new at Davos?

All ears will be on Ahmet Davutoglu at the World Economic Forum, as he will be the first Turkish prime minister to address it in six years. 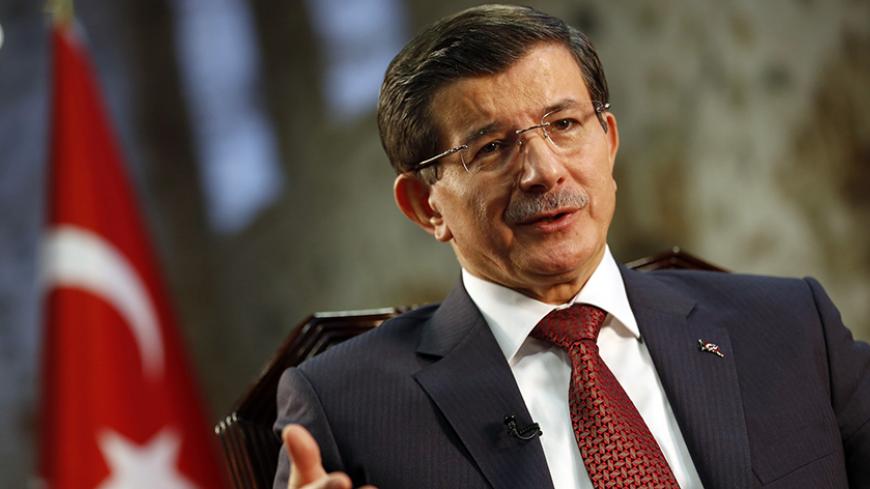 Turkish Prime Minister Ahmet Davutoglu is due to travel to Davos on Jan. 21 to attend the annual meeting of the World Economic Forum (WEF), a gathering widely considered to be the greatest brainstorming session attended by international leaders. He is no stranger to Davos, of course, having attended it last year in his capacity as foreign minister.

What makes it different this time is that he will be speaking as the prime minister of Turkey, which means it will be the first time Turkey is represented at this level at Davos in six years. Prime Minister Recep Tayyip Erdogan — who became president in 2014 — stormed out in 2009, vowing never to return to Davos, after delivering his by now well-known diatribe against Israeli President Shimon Peres over Israel’s operation in the Gaza Strip in late 2008.

That unique demonstration of unrestrained anger at Israel in front of the international community by any Islamic leader had gained Erdogan much admiration in the Arab world, with ordinary Arabs going so far as to name their newborn children after him.

It also raised Turkey’s profile in the eyes of Arab regimes in ways that appeared to justify Davutoglu’s ambitions as foreign minister of making Turkey a key regional player.

The situation since then, however, has changed fundamentally, especially after the Arab Spring. A series of policy miscalculations and blunders by Ankara concerning developments in the Arab world have since estranged many Arab regimes and significantly reduced Turkey’s profile as an active player in the region.

All eyes will therefore be on Davutoglu on Jan 24, when he speaks during a private session, to see if he brings anything new to the table. His remarks will clearly have added importance given the ongoing situation in Iraq and Syria, as well as the implications of the terrorist attacks in Paris, which have focused on Turkey again as a conduit for radical Islamists to and from Syria.

Davutoglu will have the added responsibility of speaking as the prime minister of a country that holds the current presidency of the G-20 group, comprising the 20 largest economies in the world. It remains an open question, however, whether he can say anything new when he is laboring in the shadow of Erdogan, who is setting the tone for Turkey’s foreign policy.

Erdogan appears determined in his hard-line positions on Syria, Egypt and Israel, not to mention his generally anti-Western narrative. Erdogan in many ways also remains the effective leader of the Justice and Development Party (AKP), despite having officially left this position to Davutoglu after becoming president. Much of his positions are seconded by Davutoglu, who is hard-pressed to allay any impression that there is a split between him and Erdogan.

It is unlikely therefore that Davutoglu could go against Erdogan at this stage, even if he wanted to, since this would be damaging for the AKP in an election year. This will ensure that Davutoglu will not be speaking from a position of strength or authority at Davos. Aside from the shadow cast over him by Erdogan, it was also widely known that many of his predictions and plans for the region have failed to materialize.

Syria’s President Bashar al-Assad, whose imminent downfall he predicted on more than one occasion over the past four years, is a case in point. The situation with Egypt is no better. Turkey’s official and seemingly unchanging position continues to be that Mohammed Morsi and the Muslim Brotherhood, who came to power after being elected, should be restored to their pre-coup positions.

Davutoglu, however, has little choice but to watch President Abdel Fattah al-Sisi gain international recognition, even though he toppled Morsi in a military coup. Sisi is also listed among the leaders who will attend Davos this year.

“What [Sisi] has to say could end up being much more interesting and relevant to the current situation in the region if Davutoglu fails to go beyond the academic rhetoric we are accustomed to hearing from him,” a Western diplomat in Ankara told Al-Monitor on condition of anonymity due to his sensitive position.

“Wagging a moralistic finger at the international community, while pointing to the turmoil in the region and saying 'we warned you about all this,' would gain little sympathy for Davutoglu," the diplomat said. He was referring to remarks by Davutoglu, during the meeting of the WEF in Istanbul in October 2014, concerning the situation in Iraq and Syria after the emergence of the Islamic State (IS).

"The earthquake has just hit the Western world and the United States, which is why they are taking precautions now. We have been warning the world for years," Davutoglu had said, without indicating how Ankara planned to help combat IS in a concrete manner.

Davutoglu’s remarks at Davos will nevertheless be studied for any sign that Ankara is seeking a way out of its current international and particularly regional isolation. A recent statement by Deputy Prime Minister Bulent Arinc about the need to improve ties with Egypt, for instance, have been taken as an indication that Ankara is searching for an opportunity to normalize ties with Cairo.

Yasar Yakis, a former AKP deputy and a veteran diplomat who also served as foreign minister in the early years of the AKP government, also went on the record recently to indicate that Turkey had to cooperate with Egypt to attain its targets in the Middle East.

Davutoglu is also aware of this view that has been underlined by a considerable number of Turkish analysts. He is also unlikely to be happy with Turkey’s isolation in the Middle East. This is, after all, the geography that he said only a few years ago with a striking certitude that Turkey would be the key player in.

In addition to this, Davutoglu is also aware that with Qatar bowing to pressure from Saudi Arabia on issues such as support for the Muslim Brotherhood and Hamas, Ankara is likely to end up even more isolated in the region in the future unless it recalibrates its policies according to the facts on the ground. He is not only laboring under the shadow of Erdogan today, but is also trapped by his own rhetoric.

Addressing the annual meeting of Turkish ambassadors on Jan. 8 in Ankara, Davutoglu said that some countries in Turkey’s neighborhood are “visionless and have lost their continuity, while Ankara’s vision remains vibrant.” He added, “Turkey’s vision will be present at all international meetings. What we expect of you is to bring Turkey’s vision to the world’s agenda.”

What this “vision” is, however, in the face of so many foreign policy failures that have left Turkey in a difficult and dangerous situation, is not exactly clear. Erdogan’s principle foreign policy adviser Ibrahim Kalin has referred to Turkey’s present international isolation as “precious loneliness” in an effort to bring a moralistic rationale to it.

If that is what lies at the core of the “vision” Davutoglu is referring to, then it is obvious he will have little to say anything new in Davos, even if his presence there breaks the ice after Erdogan’s dramatic exit in 2009.