Diplomats argue that Erdogan’s Saudi Arabia visit is an attempt to regain some of the regional clout Turkey has lost in the Middle East. 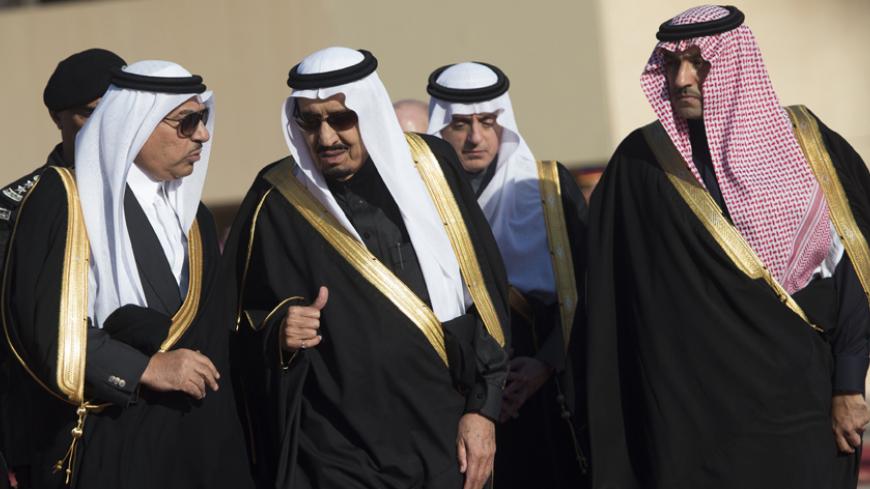 A month after attending the funeral of King Abdullah bin Abdulaziz, President Recep Tayyip Erdogan was back in Riyadh this week holding talks with new King Salman bin Abdul-Aziz Al Saud on regional issues in what diplomats are interpreting as an effort by Ankara to regain some of the regional clout it lost in recent years.

Erdogan’s visit follows his recent remark that “he could care less” about Turkey’s regional isolation, which his chief foreign policy adviser Ibrahim Kalin has dubbed “precious loneliness,” arguing that it is based on Turkey’s ethical stance on regional issues.

Erdogan’s acerbic opposition to Egypt’s President Abdel Fattah al-Sisi for ousting democratically elected President Mohammed Morsi, and Erdogan's determined support of the Muslim Brotherhood, which has been banned by Sisi as a terrorist organization, are examples of this “ethical stance.”

Due to a quirk of diplomatic scheduling — if indeed such a thing is possible — Sisi was in Riyadh at the same time as Erdogan, holding talks with Salman on regional issues and consolidating the strategic ties between the two countries. The visit led to speculation that Saudi Arabia was preparing to mediate between Erdogan and Sisi.

Sisi also raised expectations when he told Asharq Al-Awsat in an interview that there have been no official statements from Egypt insulting Turkey. Asked if the lack of official response by Cairo to statements from Turkey might not “affect the prestige of the Egyptian state,” Sisi maintained his conciliatory tone. “We believe that the survival of relations [between states] is based on the relations between its peoples,” he said, indicating that all Egypt expected of Turkey was to stop interfering in Egypt’s internal affairs.

Any chance of Saudi mediation between Turkey and Egypt was, however, nipped in the bud by Erdogan as he was preparing to depart for Riyadh on Feb. 28. “Are you joking?” he responded curtly when asked if he was planning to meet with Sisi while in Riyadh. "Such a thing is out of the question. For such a thing to happen, serious positive steps need to be taken,” Erdogan said, adding that Turkey’s problem was not with the Egyptian people, but with Sisi. Erdogan said the object of his visit to Saudi Arabia was not only to discuss Egypt but also Syria, Palestine, Libya and Yemen, as well as the war on terrorism.

Although Erdogan enjoys strong support in Egypt from the followers of the Muslim Brotherhood, political ties between Ankara and Cairo appear set to remain strained in the absence of dialogue between the two leaders. The strain in ties has also started to cost Turkey economically.

Cairo recently said it would not renew a roll-on roll-off "Ro-Ro" ferryboat agreement with Turkey after its expiration April 20. The agreement is of vital importance for Turkish exporters to the Middle East. In contrast, while Turkish-Israeli relations are at rock bottom, trade between the two countries has been increasing in recent years.

Erdogan is clearly on the losing side, given Ankara’s lack of presence in the Middle East today despite regional developments of vital importance to Turkey. Sisi, who recently hosted Russian President Vladimir Putin in Cairo, is in a stronger position, and this also applies to his ties with Saudi Arabia, given Riyadh’s determination to help Cairo keep the lid on the Muslim Brotherhood.

Retired Ambassador Temel Iskit, a frequent commentator in Turkey on foreign policy issues, believes the chances for Erdogan to drive a wedge between Saudi Arabia and Egypt are minimal, if that is his intention. Iskit also questions the motives behind Erdogan’s visit to Riyadh, characterizing it as an effort designed more to “test the waters” than to achieve anything concrete.

“[Erdogan] is in a very tight corner. There is no foreign policy left worth mentioning," he said. "He needed to start somewhere, and he most probably felt Saudi Arabia was a good place to start,” Iskit told Al-Monitor.

“Both countries are predominantly Sunni. Besides, there is no other influential country in the region that Erdogan can go to at the moment,” Iskit added, also pointing to the frosty ties between Iran and Turkey.

Iskit said he doubts that Erdogan’s visit will result in a reinvigorated strategic alliance between Ankara and Riyadh. He said Saudi Arabia has its own regional policies based on pragmatic considerations and needs Turkey less than Turkey needs it. Iskit added that it is not possible for Ankara to wield much clout in the Middle East as long as the state of its ties with Egypt persists.

The view in the pro-Erdogan camp with regard to the visit, however, differs radically. Abdullah Aydogan Kalabalik, a former Cairo bureau chief for the Ihlas News Agency, currently an analyst for the pro-government Foundation for Political Economic and Social Research, argues that ties between Turkey and Saudi Arabia will be different from what they were under Abdullah.

Kalabalik maintained in an analysis of Erdogan’s visit that for Salman, “the real threat is not the Muslim Brotherhood, but Iran.” He added that developments in Yemen have heightened the perceived threat from Iran for Riyadh, while driving a wedge between Saudi Arabia and Egypt.

“The Saudi Arabian administration continues to see the [Muslim Brotherhood] as a threat to Egypt, but Egypt does not see the Houthis in Yemen as a threat. The Saudi Arabian Foreign Ministry has therefore started to review its ties with the Turkish-Qatari axis,” Kalabalik claimed.

Arguing that this “axis” provides “a new perspective” for Riyadh on regional developments from Libya to Iraq, Kalabalik maintained that this would ensure that ties between Turkey and Saudi Arabia, and Saudi Arabia and Egypt, would not be different under Salman.

Questioned about these views, a Western diplomat with extensive experience in the Middle East who wished to remain unnamed due to his sensitive position said they represent a serious misreading of the situation, and indicated that Ankara will continue misjudging events in the region if it is relying on such analyses. He said, “Al-Sisi’s Riyadh visit at such a time is far more significant than Erdogan’s visit. It is very unlikely that the Saudis will turn their backs on Cairo, or that they will review their position on the Brotherhood.

“As for the Turkish-Qatari axis, this hardly exists anymore now that Qatar is coming increasingly under Saudi influence on issues like Egypt and the Brotherhood,” he added. The diplomat said developments indicated that it is Turkey that is trying to review its policies, which have brought isolation and left it with no influence in its own region.

He pointed to Turkey’s decision to participate in the US-led program to train and equip moderate elements of the Syrian opposition against the Islamic State (IS), and to the latest statements from Iraq, claims that have not been officially denied, that Turkey will participate in the spring offensive to liberate Mosul from IS.

Following Erdogan’s 35-minute meeting with Salman on March 2, the semi-official Anadolu Agency reported, “The sides had agreed to boost support to the Syrian opposition and to boost bilateral ties.”

This is all that could be announced after Erdogan’s visit, and the scanty information is being taken as a sign that no major breakthroughs were achieved in Riyadh. Erdogan can, however, point to this visit in trying to convince his domestic supporters that he is not as isolated in the region as his opponents say. But that is domestic, not foreign policy.