Even if Saudi King Salman Abdul-Aziz Al Saud fails to broker a rapprochement between Egypt and Turkey, he still shares many commonalities with Turkey's President Recep Tayyip Erdogan, not least their irritation with the US leadership. 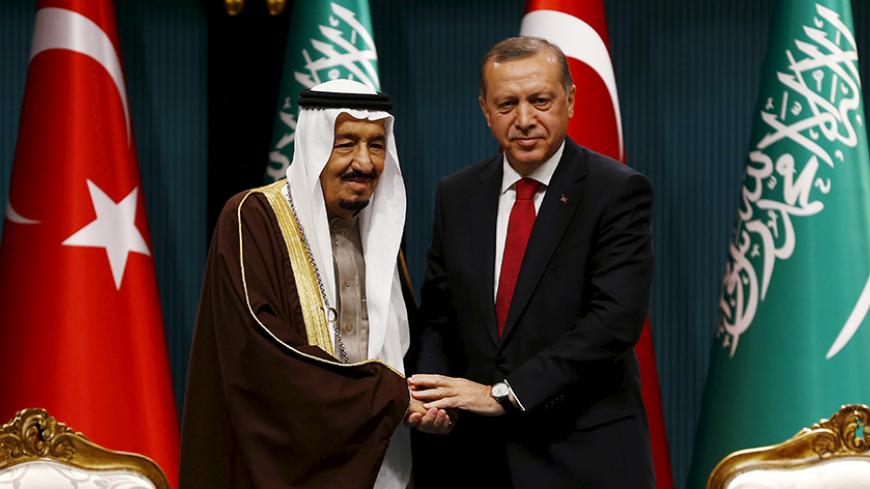 An “advance party” of some 500 Mercedes-Benz vehicles arrived in Turkey before the arrival of Saudi Arabia’s King Salman bin Abdul-Aziz Al Saud. Then the king himself, after a five-day visit to Egypt, landed in Ankara on April 11.

“Even by Saudi Arabia’s extravagant standards, this week’s visit to Turkey by [Salman], seen as a key moment for relations between the two leading Sunni Muslim powers, has set new records for opulence and paranoia. An advance team of 300 Saudi security officials was sent to Ankara to prepare for the king’s arrival,” The Guardian reported.

When Salman stepped on the tarmac of Ankara’s airport Monday afternoon, his host, Turkish President Recep Tayyip Erdogan, was there. This was unusual because according to the strict protocol of the Republic of Turkey, the official welcoming ceremony for a foreign guest of the president should be held at the presidential palace.

Erdogan ignored the rules for his friend Salman. The two developed a personal rapport after Salman took the throne in January 2015, when Erdogan rushed to Riyadh for his inauguration.

Erdogan has increasingly become a proponent of cash-savvy foreign policy, and Saudi Arabia provides the biggest coffers. Yet that consideration is not sufficient to explain the warmth between the two countries since Salman’s accession. It probably had more to do with Salman’s decision to change his predecessor's policy toward the Muslim Brotherhood, a movement with which the Turkish leadership has much in common.

Erdogan’s Turkey sponsored any Muslim Brotherhood-led government established in the post-Arab Spring Middle East and North Africa regions. The overthrow of Egyptian President Mohammed Morsi in 2011 by Gen. Abdel Fattah al-Sisi antagonized Erdogan, who identified himself with the post-Hosni Mubarak power configuration in the country. Moreover, Saudi hostility toward the Muslim Brotherhood and apparent involvement in ousting Morsi presented insurmountable obstacles to any sort of rapprochement between Ankara and Riyadh.

God interfered to redress the balance of power in the Sunni end of the region, which has been locked in sectarian strife. The death of Saudi King Abdullah bin Abdul-Aziz Al Saud and his replacement by Salman saw the accession of the Sudairi clan of the royal family to key positions in power and led to a new Saudi policy of reconciliation toward the Muslim Brotherhood. The change removed the biggest obstacle for a possible rapprochement with Turkey.

Since Salman’s accession, Ankara-Riyadh relations have developed steadily. In Ankara, the new, increasingly security-obsessed Saudi leadership found the Sunni muscle it lacked against a strengthening Iran. And in Riyadh, Erdogan found both the necessary ally for his financial prospects and the backing of a monarch carrying the title of the custodian of the two holy mosques.

​The two leaders are also cooperating closely in Syria to support the Salafi rebels fighting against the government of President Bashar al-Assad. Saudi Arabia has emerged as the main source of funding and weapons for the Ankara-backed Jaish al-Fatah (Army of Conquest), a coalition that includes al-Qaeda’s Syrian branch Jabhat al-Nusra and another main Salafi group, Ahrar al-Sham.

In addition to the pompous reception in Ankara, Salman received Turkey's highest award. The website Diken's headline announced that the medal had been given to a "Saudi despot.” The article read, “The leader of Saudi Arabia … who has one of the worst records of human rights, is given the state's highest medal by President Erdogan. Erdogan praised the leader of a country that is seen as one of the main culprits of the instability in the Middle East, saying that he is the guarantor of regional peace, security, tranquility and stability."

Erdogan's pampered guest then went to Istanbul to attend the summit of the Organization of Islamic Cooperation.

It looks almost certain that the Arab monarch is trying to use his imperial background to mediate between the two major Sunni power centers of the region: Egypt and Turkey.

At this juncture, despite Salman's efforts, such a mediation initiative looks like an impossible mission. Istanbul hosts the Muslim Brotherhood-dominated Egyptian parliament in exile, the disbanding of which is more or less essential for any improvement between Cairo and Ankara. Erdogan seems adamant that he will not take any steps backward to satisfy Sisi.

Another low-profile but problematic matter is Turkey’s (or Erdogan’s) strong interest in the Gaza Strip. Turkey and Israel have improved their relations, reconciling over Israel's 2010 raid on the Mavi Marmara flotilla. The Gaza issue remains the main obstacle. Ankara is insistent that Israel should give Turkey access to Gaza by lifting the blockade.

Extending Turkish influence over Gaza is essential for Erdogan, who wants to resurrect his diminished image in the Muslim world and with Sunni Arabs. However, Erdogan’s interest in Gaza is a touchier subject with Egypt than with Israel. Egypt has always been considered an essential interlocutor when it comes to Gaza. For Israel, maintaining the balance with Egypt and not alienating it, for obvious geopolitical reasons, is as important as improving relations with Turkey.

But even if the Saudi mission to mediate between Egypt and Turkey doesn't bear fruit, there is another strong tie between Salman and Erdogan: US President Barack Obama.

Though Obama was once a staunch ally, his name now has a sour taste for both Muslim leaders. Erdogan had a fairly unhappy encounter with the American president recently. And as CBS News' "60 Minutes" reported April 10, “In 10 days, President Obama will visit Saudi Arabia at a time of deep mistrust between the two allies, and lingering doubts about the Saudi commitment to fighting violent Islamic extremism.”

The visit comes, CBS reports, “when the White House and intelligence officials are reviewing whether to declassify one of the most sensitive documents” on the possible existence of a Saudi support network for the 9/11 hijackers while they were in the United States.

Reza Zarrab, the most important figure in the embezzlement probe that rocked Erdogan's rule in 2013-14, was arrested March 19 in Miami and awaits trial in New York. That situation is expected to have a huge impact on Turkey's political agenda.

All things considered, there are more than enough reasons for Salman and Erdogan to stick together.