Does Turkey courting Iran and Saudi Arabia simultaneously mean Ankara is moving away from Sunni-based policies? 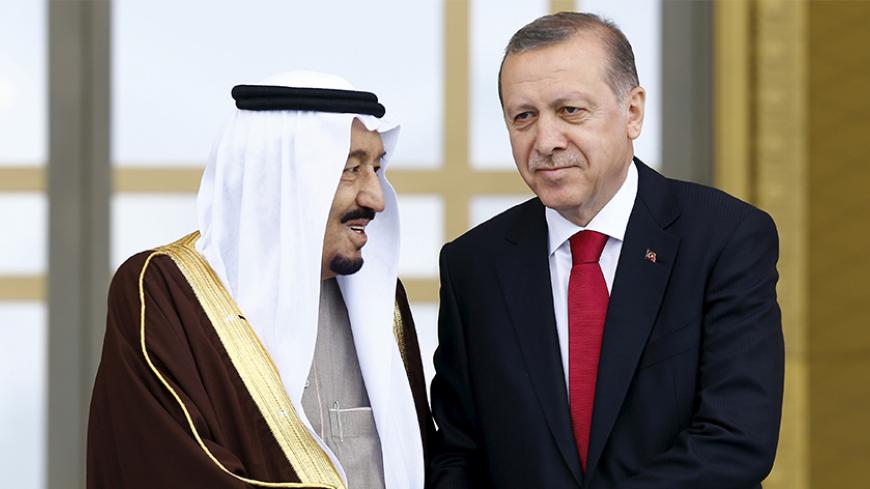 Ankara is developing a dual-track approach to the Middle East by simultaneously courting bitter rivals Saudi Arabia and Iran to shore up its position in a region that has defied its plans and ambitions to date. Foreign policy experts say this new approach, which they consider to be a “work in progress,” has the potential to make Turkey an influential regional player again if it is allowed to mature.

This new approach has already resulted in a spate of high-level recent visits between Turkey and Saudi Arabia, and Turkey and Iran. Turkey remains unhappy, of course, about Tehran’s support for the Bashar al-Assad regime, while Iran is unhappy about Ankara’s support to anti-Assad groups in Syria.

But Ankara’s Sunni-based approach to the region and its overt pro-Muslim Brotherhood sympathies provided little in the end other than ruffling the feathers of both Sunni and Shiite powers. Saudi Arabia and Iran, nevertheless, appear keener now to respond to Ankara’s outreach because of the common interests with Turkey that have emerged.

Saudi Arabia's King Salman bin Abdul-Aziz Al Saud arrived in Ankara April 11 against this backdrop, with a large entourage of aides, for two days of talks with Erdogan and Davutoglu on regional issues, with the focus expected to be mostly on Syria.

These talks also come immediately before the Organization of Islamic Cooperation summit in Istanbul later this week to be hosted by Erdogan. Salman will travel to Istanbul from Ankara to attend the summit.

Salman’s visit to Ankara follows up on Erdogan’s “icebreaking” visit to Riyadh in December, which took place only a month after Erdogan attended the funeral of King Abdullah bin Abdulaziz.

Diplomats have noted the relative improvement in ties after Salman came to power. Officials in Ankara also say they detect signs of a new approach by Riyadh toward the Muslim Brotherhood after Abdullah’s death.

Following Erdogan’s visit to Riyadh, there was much talk about a “Sunni alliance” between the two countries, especially with regard to Syria. After it was announced in February that Saudi fighter jets would be deployed at the Incirlik Air Base in Turkey, speculation was rife that the two countries were preparing for a joint intervention in Syria.

These claims were denied by Saudi Arabia, who said its jets would only join the US-led coalition in strikes against the Islamic State and had no other mission. Ankara and Riyadh, nevertheless, continue to support anti-Assad fighters operating under the banner of the Free Syrian Army, which includes groups that Iran and Russia say are terrorist organizations and which the United States is also not too keen about.

Developing ties with Riyadh gives Ankara an important partner in the Middle East and helps it not only overcome its regional isolation, but to also reinforce its hand in Syria and Iraq.

Conversely, ties with Ankara provides Riyadh with an important regional and predominantly Sunni partner at a time when it is in deep rivalry with Iran.

This is said to be particularly important for the Saudi side because it feels it has lost ground against Iran following Tehran’s rapprochement with Washington.

Soli Ozel, a lecturer in international relations at Istanbul’s Kadir Has University, and who has a column in daily Haberturk, said this is also driving Riyadh to developing its ties with Ankara.

“The Saudis want Turkey as a counterbalance because they mistrust US intentions about Iran. But this expectation in Riyadh is likely to be misplaced,” Ozel told Al-Monitor. His remarks are corroborated by the fact that Ankara is eager to overcome the impression that it is pursuing Sunni-based policies.

Turkey is unlikely, therefore, to enter any Sunni alliance that appears to be against Iran.

Davutoglu’s surprise visit to Tehran in early March, and the positive statements made there with regard to bilateral ties, was taken as an indication of Turkey’s desire to build bridges with Iran.

Ozel pointed out that the Kurdish issue is also a shared factor in Turkish-Iranian ties. “Both countries are wary about efforts by the Syrian Kurds to establish an autonomous region for themselves,” Ozel said.

Ozel added that efforts to develop ties with Tehran and Riyadh simultaneously also signals an effort on Ankara’s part to establish what he referred to as a more “variegated” policy toward the region. He stressed that this policy has yet to emerge fully.

An Iran that has been opening up to the world rapidly after its nuclear deal with the West also provides a lucrative market, which Turkey cannot overlook. But retired Ambassador Unal Cevikoz, whose past posts include Baghdad, pointed out that while this is an added catalyst for improved ties with Iran, Turkey can make little headway in this regard if its political relations are not in order.

Cevikoz told Al-Monitor that the apparent “dual-track” policy Ankara is displaying toward Saudi Arabia and Iran now is a positive development that can put Turkey back in the picture regionally.

“If this is allowed to mature, it will help make Turkey shed some of its negative image and make it a respected player again in the Middle East,” Cevikoz said. He added, however, that Ankara had to also improve its ties with Egypt and Israel for this to happen.

“Riyadh can help bridge Turkey’s differences with Egypt,” Cevikoz said, referring to the fact that Salman arrived in Ankara this week from Cairo where he held talks with President Sisi.

On the other hand, retired Ambassador Bozkurt Aran, who currently lectures at Ankara’s TOBB University, believes this “dual-track approach” by Ankara is still a “work in progress,” and he doubts if we can talk about a new direction in Turkey’s Middle East policy yet.

“We got to this stage after much self-created turbulence, which is not totally over yet. Turkey’s policies also helped provoke the Shiite resurgence in the region. Ankara has to still overcome all the damaging effects of this turbulence before we can say that a new policy is in place,” Aran told Al-Monitor.