Despite a shared interest in supporting opposition groups against Syrian President Bashar al-Assad, Riyadh and Ankara are unlikely to become allies. 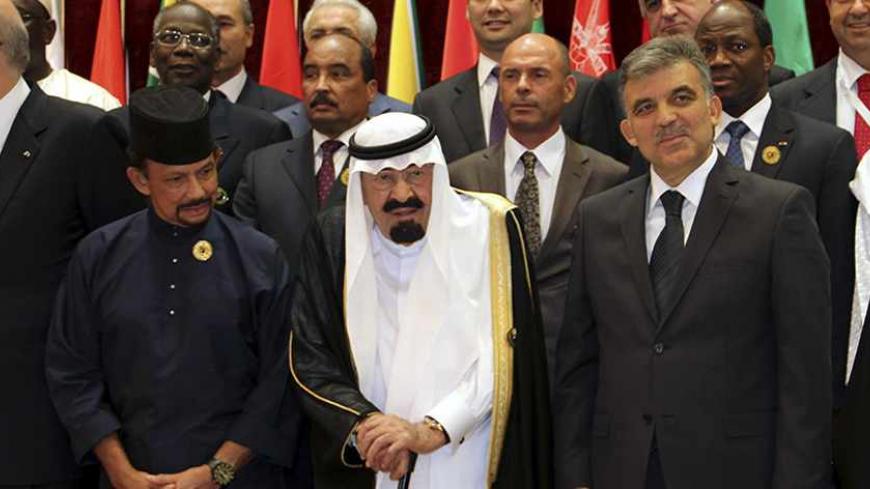 An overly ambitious Foreign Minister Ahmet Davutoglu boasted during a speech to the Turkish parliament less than two years ago in April 2012 that Turkey was the principal pacesetter in the region.

“As Turkey, we will continue to guide the winds of change in the Middle East and be its leader,” a self-assured Davutoglu said. He added that from the streets of Cairo, Tripoli and Beirut, all the way to Jerusalem and Tunisia, Turkey was admired as a country that had the capacity to determine the region’s future order based on peace and brotherhood. “No matter what anyone says, the leader and the spokesman for this new peaceful order will be Turkey,” Davutoglu said back then.

That’s all history now. Today, it is also much easier to understand — with the advantage of hindsight — how such remarks must have grated on nerves in Riyadh, Cairo and Tehran, which are clearly pushing for their own regional aspirations that are not necessarily in tune with those of Turkey.

It is also obvious that Davutoglu never considered the possibility that there might be other Islamic powers trying to shape the Middle East according to their own vision. His overly simplistic approach was predicated on the mistaken assumption that being predominantly Islamic, the Middle East could — with Islamic Turkey’s benign leadership and guidance — act as a unified entity.

All this appears naive today when the intractable Syrian conflict has not only left Ankara and Tehran at odds but has also upped the ante in the cold war between Saudi Arabia and Iran in ways that neither Prime Minister Recep Tayyip Erdogan nor Davutoglu anticipated.

Similarly, the coup in Egypt has left Turkey at loggerheads with Saudi Arabia, making even more of a sham of Davutoglu’s claim that Turkey leads in the Middle East and others follow. Saudi Arabia is making it increasingly clear that it is the one that is vying for regional leadership.

Ankara and Riyadh appear at first glance to be on the same page on Syria, with both countries wanting to see the demise of Syrian President Bashar al-Assad, having placed all their bets on this option. Both castigate the brutality of Assad against his people and want him punished. Both have also provided assistance to the armed Syrian opposition, including jihadists, to varying degrees.

It is nevertheless evident that the two fundamentally different regimes have their own motives and agendas for doing this. It is also doubtful that they would agree over the kind of government they would like to see in post-Assad Syria. Both would like it to be Islamic and predominantly Sunni, but that is where it ends.

Saudi Arabia has shown in its internal policies and in Egypt that it has little love for democracy. It has also shown that it considers Islamists affiliated with the Muslim Brotherhood to be a threat. This is why it has been supporting the military in Egypt, a fact that has confounded Erdogan.

The Saudi position appears contradictory, of course, given its support for Islamists fighting Assad. But its aims are clear even as it appears to be playing a mixed game. It wants to reduce Iranian influence and keep Tehran at bay, and one way to do that is to shore up the anti-Assad front — jihadists included.

On the one hand, Riyadh wants to prevent the spread of the Muslim Brotherhood’s agitating influence among the region’s dispossessed and oppressed masses, especially now that Egypt has provided an example of what that can lead to.

While Riyadh would like to see a Sunni government in Syria, it would not like to see an elected one, the way Ankara wants. The public at large in the Middle East tends to look on oil-rich Arab regimes with contempt, dreaming of the day they will be toppled.

Erdogan’s critics — and no doubt they include Saudi Arabians — on the other hand, say his avowed love of democracy is not genuine, being based on a majoritarian outlook, rather than on truly democratic values. They believe that he is pushing for his kind of democracy in the Middle East, knowing full well it will favor the Muslim Brotherhood, as it has already done in most countries affected by the Arab Spring.

Erdogan has also undermined his credibility through his authoritarian tendencies and intolerance against opponents and rivals at home. Playing the moralist, as Erdogan has also done in Syria and Egypt, is, however, not exclusive to him. Moralist arguments are providing a convenient smokescreen for others in the region while they pursue their separate agendas.

Saudi Arabia’s refusal to take up its seat at the UN Security Council as a nonpermanent member is an example. Riyadh has presented this as its way of protesting the UN’s inability to prevent Assad from committing crimes against his people. Given its own oppressive policies, especially toward its large Shiite minority, Saudi sincerity is therefore also questionable.

Clearly the last thing Riyadh would like to see is a Turkey that invokes the ballot box and meddles in the internal affairs of the region on the basis of democratic arguments, the way it is doing in Egypt. It would therefore want to see less Turkish influence in the Middle East, not more, and certainly not the kind Davutoglu was talking about in 2012.

Meanwhile, it is telling that Erdogan — never one to miss a chance at letting off at those he is angry with — is largely mute on Saudi support for his bête noire, the Egyptian strongman, army chief Gen. Abdel Fattah al-Sisi. He obviously does not want to take on another major Arab power and deepen Ankara’s regional isolation further.

Saudi-led support by Sunni Arab powers for Sisi also put the nail in the coffin of Davutoglu’s leadership ambitions for Turkey in the Middle East, where little these past three years has gone according to Ankara’s expectations.

Erdogan and Davutoglu must be bracing themselves for confirmation of news reports that Saudi Deputy Defense Minister Salman bin Sultan recently visited Israel secretly to coordinate policies against Iran, their mutual nemesis. The unexpected turn in relations between Washington and Tehran has angered the Saudis and Israelis equally, making it plausible that they are holding secret talks.

Erdogan’s antipathy for Israel, however, remains in place, a fact that is also delaying rapprochement between the two countries months after Israeli Prime Minister Benjamin Netanyahu apologized for the Mavi Marmara raid. To see Saudis and Israelis as bedfellows would clearly be a hard one for Erdogan to digest.

Saudi Arabia is evidently annoyed today with anything that strengthens Iran’s hand. This is why it also opposes the format for a solution to the Syrian crisis being pushed by Russia and the United States. It is aware that if Geneva II goes ahead, it leaves the Assad regime intact, the way Tehran wants.

All of this makes for a slippery environment for Ankara, showing that Turkey has more potential rivals in the Middle East than compliant friends and allies who are willing to help it fulfill its regional ambitions.