As Arab states warm toward Syria, Ankara might end up facing an anti-Turkish Arab bloc that could complicate its planned operations in northern Syria. 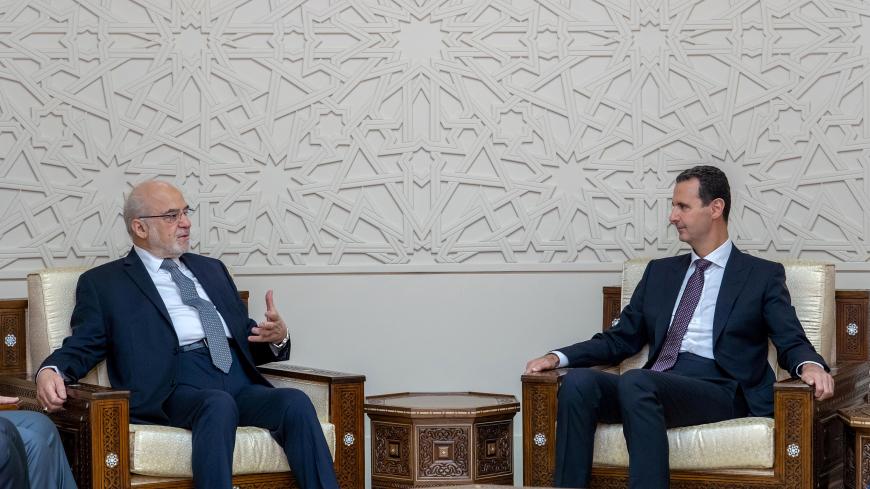 The apparent thaw in Damascus’ relations with the Arab world is more bad news for Turkey, which is already having a difficult time coping with the rapid change in the balance of power in Syria. If President Bashar al-Assad is welcomed back to the Arab fold, as many expect, it will be the final nail in the coffin of Ankara’s Syria policy, which has been plagued with misjudgments, false assumptions and overambitious expectations from the start.

As countries like Sudan, UAE, Bahrain, Egypt, Jordan, Iraq, Lebanon and Tunisia line up to favor the normalization of ties with Syria — and many expect Saudi Arabia to join them eventually — Ankara could end up facing an anti-Turkish Arab bloc it never expected. Such a bloc could also complicate Turkey’s plans to enter northern Syria to clear the town of Manbij and territories east of the Euphrates River from the Kurdish People's Protection Units (YPG), especially now that Damascus has declared its opposition to this incursion.

Turkey has problematic relations with almost if not all of the Arab countries listed above, most notably with the region’s key players Egypt and Saudi Arabia. These countries have given no indication that they are less concerned about Turkish meddling in their affairs than they are about Iranian interference. Almost all of them abhor Turkey’s support for the Muslim Brotherhood, which they believe poses an existential threat to their existing regimes, and have fought hard to roll back this group since the Arab Spring.

Some news portals that focus on the region are even citing unnamed Gulf officials as claiming that Saudi Arabia, the UAE, Egypt and Israel have been involved in secret talks about curbing Turkey. According to such accounts, these countries ultimately consider Turkey to be more of a threat because it is stronger than Iran.

It looks like former Foreign Minister Ahmet Davutoglu’s dream of making Turkey the region’s principal player — “without whose consent a leaf could not move in the Middle East” — is long over. Even before the Arab Spring Davutoglu believed that Turkey, under its democratically elected Islamist Justice and Development Party (AKP) and popular leader Recep Tayyip Erdogan would become the Middle East’s main pace-setter because of its predominantly Muslim population, democratic system, thriving economy and strong military.

The return of a powerful country like Turkey to the Islamic world, following decades of estrangement from the region’s devout masses because of its secular system, was believed to be sufficient to elevate Turkey to this historic position. Turks and Arabs united under Islam would walk hand in hand toward a bright future under Turkey’s wise patronage.

This belief only got stronger after the Arab Spring, which Ankara believed would springboard the Muslim Brotherhood to power across the region in democratic elections in the same way that a majority of Turkish voters brought the AKP to power in 2002. When it came to Syria, as far as Davutoglu was concerned, Assad’s demise was only a matter of time — “months if not weeks away,” he once remarked — after which developments from Egypt to Tunisia would unfold according to Turkey’s wishes.

A lot of water has passed under the bridge since then. In the meantime, Davutoglu is out and Assad remains in place, stronger than ever, for reasons that Davutoglu, despite his claim of understanding regional dynamics better than most, failed to factor in.

The situation in the region today highlights just how much off the mark Ankara was regarding the social and political realities that govern the Middle East and how misguided Davutoglu’s assumptions were regarding Turkey’s Ottoman past in the region. Blinded by its Islamist ambitions, Ankara failed to understand the significance of its historic baggage in the Arab world.

Davutoglu, who went on to become prime minister until being dismissed by Erdogan in May 2016, has since been discredited and — even in the eyes of many AKP supporters — is seen as responsible for the difficulties Ankara faces today in Syria. His scapegoating also deflects attention from Erdogan, without whose permission Davutoglu could not have enacted his policies.

Murat Ozcelik, Turkey’s former special representative to Iraq (2007-2009) and subsequently ambassador in Baghdad (2009-2011), also believes that Assad’s re-admittance to the Arab states will be the clearest evidence of the collapse of the AKP’s foreign policy.

“It will also confirm the alienation that came as a result of a policy tinged with Ottomanism and that did not factor in Arab nationalism in any way,” Ozcelik told Al-Monitor.

Ozcelik, an ardent critic of the AKP’s Islamist-based foreign policy outlook, which he argues has done great damage to Turkey’s interests, went on to highlight some of the other grave mistakes he says Ankara made.

“If you turn your back on the seats of Arab nationalism like Saudi Arabia and Egypt in favor of a small country like Qatar, they are not likely to forget that,” Ozcelik said. “If you walk arm in arm with those who are trying to undermine the current regimes in countries like Saudi Arabia, they in turn will not want to work with you.” He added wryly, “It is no mean achievement for a government to be able to produce such an anti-Turkish bloc in such a short space of time.”

Soli Ozel, a lecturer in international relations at Istanbul’s Kadir Has University and a well-known foreign policy commentator, also believes that an anti-Turkish bloc is in the making in the Middle East. “Turkey will encounter an Arab bloc in the region challenging its claims and aspirations,” Ozel told Al-Monitor. “Public opinion in the Arab world may favor Turkey, but this is not the case with existing regimes,” he said.

As matters stand today, Erdogan and his government continue to champion the Muslim Brotherhood and its affiliates as well as what they consider to be the natural rights of the region’s Islamic masses.

This stance, however, appears set to ensure more alienation for Turkey among Arab regimes that consider the Muslim Brotherhood their archenemy and have declared it a terrorist organization. Saudi Arabia and Egypt currently head the list of regional powers that oppose Turkey in this regard.

There is also the question of how these developments will affect Ankara’s current plans for northern Syria, where it is working to set up a buffer zone against the YPG that will be controlled by the Turkish military.

Ozel said it is Russia more than Arab regimes that will determine the fate of this buffer zone. “Things will, nevertheless, get more complicated for Ankara diplomatically as Arabs also make noise against it,” he added.

Ozcelik had a different take, warning that if angered further, Arabs could turn the Kurdish card against Turkey. He said, “The buffer zone Turkey wants in northern Syria might be something Arab regimes support because it will draw a formal line showing how far Turkey can go into Arab lands.” Ozcelik added, “Having the Kurds on the other side of this zone might also be good for them, because they can manage the Kurds, who will stand between Arab lands and Turkey.”

Turkey’s ultimate dilemma will, of course, be coping with Assad, who continues to consolidate his hold over power in ways Ankara never expected and who obviously has no love for Turkey.

Foreign Minister Mevlut Cavusoglu said in December that Turkey could accept Assad provided he is elected in democratic and internationally monitored elections. It appeared to be a breach in Erdogan’s uncompromising stand against Assad, based on his often repeated argument, “There is not future for a killer of his people in Syria.”

Assad knows, however, that he will never be elected in free elections, so he will ensure that he remains as Syria’s strongman for as long as he can. He will have the backing of Arab regimes as well as Russia and — to the extent that that his ties with Sunni Arab regimes allow — Iran.

How Turkey will overcome such a hurdle is unclear. What is certain, though, is that none of the developments unfolding in Syria portend well for Turkey’s regional ambitions.