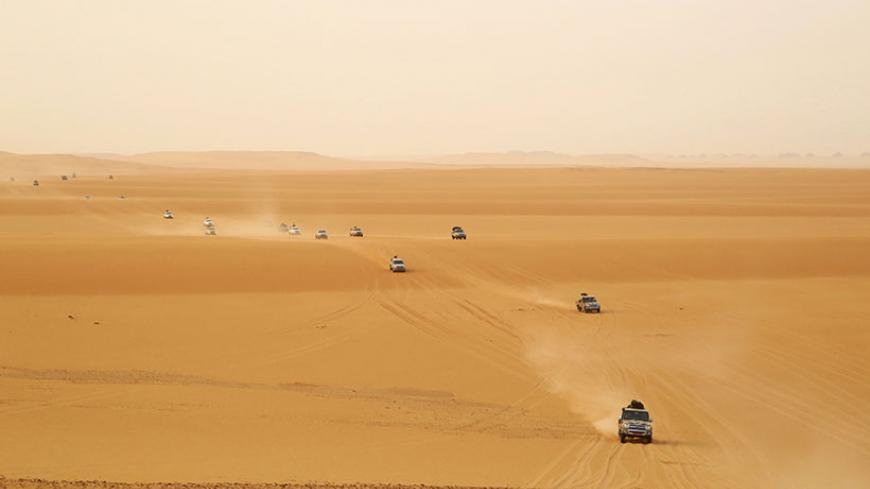 Troops and vehicles from the national army in Kufra are seen taking part in an "Operation Dignity" mission at the Libyan-Egyptian border, June 5, 2014. - REUTERS

An inflated sense of its influence and overambitious plans that didn’t match the reality on the ground has left Turkey increasingly isolated in the Arab world. As Ankara closes one consulate after another in the Middle East and North Africa for security reasons, Turkish citizens in the region have also become persona non grata on account of the government’s policies.

The latest development in this respect is in Libya, where Ankara’s support for Prime Minister Ahmed Maiteeq, who is backed by the Muslim Brotherhood but whose election by parliament a month ago was annulled recently by Libya’s Supreme Court, is also beginning to backfire.

Turkey was forced recently to pull out its diplomatic staff from Benghazi and urge its nationals to leave the region after heavily armed groups allied with retired Gen. Khalifa Belqasim Hifter declared war on Islamist militants, including supporters of the Muslim Brotherhood.

Accusing Turkey along with Qatar of supporting terrorism, Hifter’s spokesman Mohamed el-Hejazi warned all Turks June 22 to leave eastern Libya immediately or face the consequences. "All citizens of Turkey and Qatar should leave Libya within 48 hours. The countdown started last night,” he said.

Reports from the region say Turkey is seen as a sponsor of radical Islam by Hejazi supporters. This is a further sign that Prime Minister Recep Tayyip Erdogan and Foreign Minister Ahmet Davutoglu’s open sympathy for the Muslim Brotherhood has turned out to be a liability for Turkey, from Libya to Egypt and Saudi Arabia.

It is also proving that it is not just predominantly Shiite countries, governments and groups that Ankara has alienated. The ruling Justice and Development Party (AKP) and its professional and educated Islamic supporters feel a natural affinity with the Muslim Brotherhood.

They had hoped that the Brotherhood and groups affiliated with it would come to power across the region after the Arab Spring. The expectation was that they would be elected popularly, the way the AKP was in Turkey.

Ankara underestimated the animosity felt by the regions’ established Sunni order toward the Muslim Brotherhood, which has been declared a terrorist organization in Egypt, Saudi Arabia and a number of Gulf states. Turkey’s support for the group has cost it.

Erdogan’s coming to power in 2003 had caused excitement in the Middle East and North Africa, not just among Brotherhood supporters but also regimes and governments, because of his Islamist credentials and the hope that Turkey would cooperate more with the Arab world than it had in previous decades.

Turkey’s Western leanings, staunch secularism and the Kemalist ideology behind them never commended it to Arab nations. Many believed Turkey under Erdogan would start returning to the Islamic fold after decades of pro-Western policies, including its ties with Israel.

All of that appears a distant echo today. Ties with Iraq, Egypt, Syria and Saudi Arabia remain strained as a result of a series of political miscalculations. Instead of spreading its positive influence in the region as soft power — as it hoped to during the Arab Spring — Turkey is being accused of supporting radical Sunni groups, usually a reference to the Muslim Brotherhood, and forced to retreat in one country after another.

Erdogan and Davutoglu’s miscalculations in Syria are glaring in hindsight. But Ankara is also being forced to retreat in Iraq, where the latest developments caught it off guard. Ankara continues to have strained relations with the predominantly Shiite government of Iraqi Prime Minister Nouri al-Maliki. But Turkey is also in a difficult situation in the parts of Iraq that have fallen to the Islamic State of Iraq and al-Sham (ISIS).

The recent raid on Turkey’s consulate in Mosul by ISIS and the taking hostage of 49 Turks, including the consul general, represent a serious embarrassment for the government, especially as the hostage crisis continues with no apparent resolution in sight. Ankara appears out of touch with developments in Iraq.

Concerned by ISIS advances, Turkey warned its citizens June 18 to leave Iraq. The exception was northern Iraq, controlled by the Kurdistan Regional Government (KRG). The Foreign Ministry statement read: "Iraq's security crisis continues to deepen and has reached a critical point in which civilians are being targeted." Turkish officials are also worried about anti-Turkish propaganda in Shiite southern Iraq.

Meanwhile, Kurdish-controlled northern Iraq has become a safe haven for Turks due to the strategic energy ties between Ankara and the KRG and the military cooperation that appears set to develop against ISIS now that developments have increased the importance of the Kurdish peshmerga.

Relatively stable northern Iraq is also becoming a buffer zone between Turkey and the turmoil in the rest of Iraq. But Ankara’s ties with the KRG have angered the Maliki government, seriously diminishing any political influence Ankara may have once had in Baghdad.

Ankara’s ties with northern Iraq have also angered Washington, where the US administration is trying to put Iraq back together and continues to fear that the Turkish-Kurdish relationship is hastening the dissolution of Iraq. The United States is expected to be more emphatic about this point after US Secretary of State John Kerry’s talks in Baghdad and Erbil, ongoing as of this writing.

But developments from Libya to Iraq are forcing Ankara to retreat in the Middle East and North Africa. Turkey’s regional priority today is to protect its citizens and rescue those kidnapped. After that, it will face the challenge of developing new policies that will reverse this trend as its isolation among Arab countries grows.