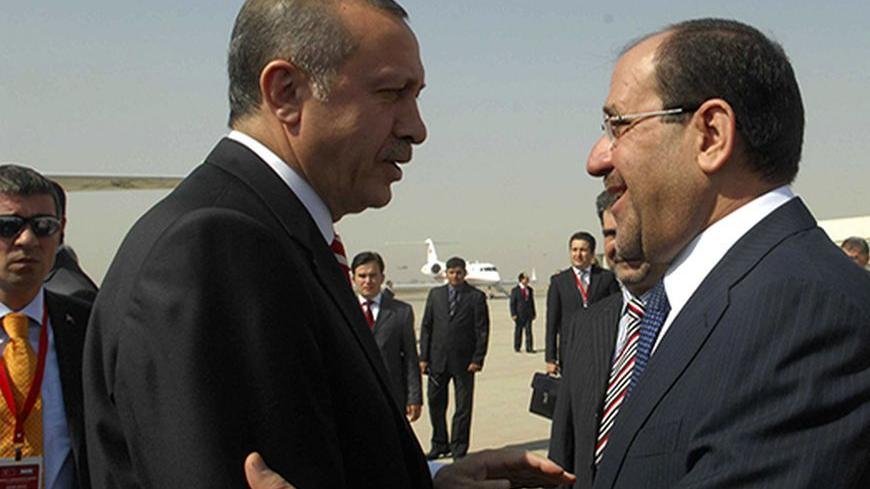 It's no secret that there is little love lost between Turkish Prime Minister Recep Tayyip Erdogan and Iraqi Prime Minister Nouri al-Maliki. They have exchanged barbs and insults and accused each other of stoking sectarian divisions in the region along the age-old Sunni-Shiite fault line.

Events, however, are forcing a new evaluation in Ankara and Baghdad of bilateral ties. A recent spate of high-level visits is being taken by diplomats as a sign that the sides are trying to patch up differences for a host of pragmatic reasons.

As an indication of how bad things had gotten, Erdogan in January 2012 accused Maliki of being oppressive and warned him not to turn into a latter-day Yazid. The reference was to the Umayyad caliph whose forces defeated the Prophet Muhammad’s grandson, Hussein ibn Ali, and his supporters in 680 in Karbala, Iraq, killing them all including Hussein’s infant son, Ali al-Asghar ibn Husayn.

Karbala has a central place in Shiite history and the events there nearly 1400 years ago continue to reverberate. To liken Maliki — who is Shiite — to Yazid is particularly insulting to the Iraqi prime minister and his supporters.

Maliki in turn has on a number of occasions accused Erdogan of “meddling in Iraq’s internal affairs” by supporting minority Sunnis in underhand ways. "Insisting on continuing these internal and regional policies will damage Turkey's interests and makes it a hostile state for all," Maliki said in a statement on his website in April 2012, which was quoted extensively by the Turkish media.

Erdogan and Maliki have made their sectarian leaning more than apparent, especially when it comes to the crisis in Syria, which makes the accusation of stoking sectarianism that they have flung at each other a classic case of the pot calling the kettle black.

Erdogan’s sectarian leanings were particularly apparent when he fully supported Iraqi Vice President Tariq al-Hashemi, a prominent Iraqi Sunni accused in 2011 of establishing anti-Shiite death squads. Hashemi — who was sentenced to death in absentia in September 2012 — had taken refuge in Turkey after the authorities moved against him.

Erdogan vowed he would not be extradited to Iraq and indicated during a press conference at the time that it was "out of the question" that Hashemi had been involved in the crimes he was found guilty of.

Hashemi subsequently left Turkey, after his presence in the country caused tensions between the Erdogan government and the opposition. The standoff over Hashemi nevertheless poisoned relations between the two government’s further, reducing diplomatic contacts to a minimum.

Tensions between Ankara and Baghdad have not been fueled solely by issues relating to different sectarian sympathies. Turkey’s growing ties with northern Iraq — which is constitutionally still a part of Iraq — also drove a wedge between the sides. Matters got worse after Turkish companies started signing oil exploration and exploitation contracts with the Kurdistan Regional Government (KRG) over Baghdad’s head.

That development also left Ankara at odds with Washington. The United States argued that Turkey’s independent ties with the KRG was fueling separatism in Iraq and increasing the risk that the country could fall apart. In November 2012, the Maliki government decided to expel Turkey’s state oil company Turkiye Petrolleri Anonim Ortakligi from southern Iraq, where it had a 30% stake in the small oil fields of Badra and Maysan.

Iraqi officials denied this move had anything to do with Ankara’s ties with the KRG, but the denial did not convince industry sources, who considered it a retaliatory move. By that stage, ties between Ankara and Baghdad had already hit an all time low following an impromptu visit by Turkish Foreign Minister Ahmet Davutoglu in August 2012 to Kirkuk, following talks in Erbil.

The Maliki government was furious that it had not been informed of this beforehand. The question of who controls Kirkuk remains hotly disputed between Iraqi Kurds and Baghdad and has brought Kurdish forces and the Iraqi military to the brink of conflict.

By labeling Davutoglu’s visit “illegal,” Iraqi officials claimed this could have dire consequences for the whole region. Some officials in Baghdad even argued that the Turkish foreign minister could have been arrested while in Kirkuk over this hostile act. Shortly after Davutoglu’s Kirkuk visit, the Maliki government displayed its anger again by refusing landing rights at the last minute to the plane carrying Turkish Energy Minister Taner Yildiz for a conference in Erbil.

Meanwhile, the Syrian crisis — festering in the background — also contributed to the tension as Turkey and Iraq backed opposing sides in the conflict by taking steps and following policies which also reflected their sectarian leanings.

But as the fighting in Syria intensified — with no apparent end in sight — and the security risk for both countries grew, it also became clear that continuing tension between Ankara and Baghdad merely aggravated sectarian divisions in the region.

A new approach was urgently required and the ice was broken by the visit of Osama al-Nujaifi, Iraqi speaker of parliament, to Ankara in September. Nujaifi’s visit was followed up by a visit to Baghdad on Oct. 22 by a parliamentary delegation led by Volkan Bozkir, a former senior diplomat who is a key deputy from Erdogan’s party and who heads the Turkish Parliamentary Committee on Foreign Relations.

While in Baghdad, Bozkir also met with Maliki and extended Erdogan’s invitation to visit Turkey. Striking while the iron was hot, Iraqi Foreign Minister Hoshyar Zebari visited Ankara on Oct. 25 to kick-start a new phase of diplomatic dialogue with Davutoglu on regional issues. Zebari was received in turn by Erdogan in Ankara.

Davutoglu is expected to travel to Baghdad soon to further the dialogue on regional issues, with Syria topping the agenda. This will be his first visit to the Iraqi capital since 2011. These visits, coming one after another in a short space of time, show the desire on both sides to turn a page and leave differences behind.

Attention is focused now on a visit by Maliki to Ankara and a return visit by Erdogan to Baghdad.

One of the main reasons why the desire for rapprochement comes now is that the Syrian civil war has produced security risks for both countries, especially from al-Qaeda-affiliated groups that are trying to entrench themselves in Syria.

Terrorist attacks by these groups against Shiite communities are already a common phenomenon in Iraq. Turkey, for its part, has started taking measures to guard itself against such groups, despite having initially turned a blind eye to their activities because of their successes against Syrian President Bashar al-Assad’s forces.

Ankara is also concerned about the situation in northern Syria, where Syrian Kurds are making gains against jihadist groups and entrenching themselves along the Turkish border.

It is telling, therefore, that Iraqi Kurdistan Prime Minister Nechirvan Barzani is expected for talks in Ankara on Oct. 31, showing that the “Kurdish dimension” is also an unavoidable aspect of Turkish-Iraqi ties and the Syrian equation. Strained ties between Maliki and the KRG over energy rights have improved in recent months. Improved ties between Ankara and Baghdad would complete the circle.

Given the volatility of the whole region as a result of the Syrian crisis — which is also forcing Iran to take a more moderate line in its ties with the West — it is clear that the only option left for Erdogan and Maliki is to overcome their mutual animosity and look realistically at the big picture in the Middle East.