ISIS advances in Iraq have finally forced a Turkish reassessment of its regional policies. 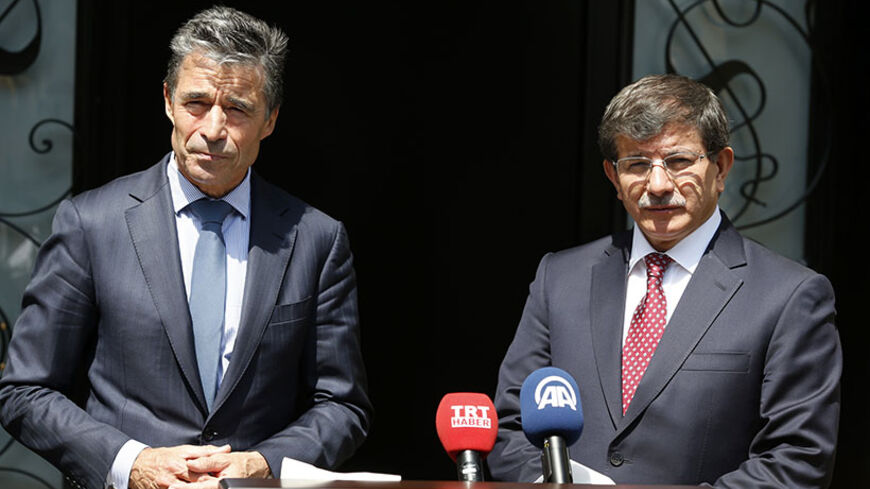 The rise of the Islamic State of Iraq and al-Sham (ISIS) in Iraq and other developments in the Middle East that Turkey failed to foresee are forcing Ankara to realign itself with its traditional Western allies and reappraise its regional policies. Prime Minister Recep Tayyip Erdogan’s government is also now concerned that a prolonged conflict between Sunnis and Shiites is upon us, and he is therefore trying to move to the center, away from overtly sectarian positions.

Ankara is increasingly aware that a new balance of interests is developing in the region whereby Turkey will have to play some kind of an active role if it is to contribute to stabilizing the area and not be further marginalized, as it has been due to its policies in Iraq, Syria and Egypt. Turkish diplomats are not only focusing on the dialogue between Washington and Tehran in this context, but are also aware that circumstances are forcing relations between Turkey and the Kurdistan Regional Government (KRG) beyond the economic sphere and into the domain of security cooperation.

Ankara remains officially opposed to Kurdish claims over the oil-rich city of Kirkuk, but appears reconciled to the fact that the city was secured by Kurdish peshmerga against ISIS and is set to remain under Kurdish control for the foreseeable future. It knows that Kirkuk’s Turkmen are unhappy with this and angry with Turkey, as they see it, for deserting them. Sources close to the Erdogan government maintain, however, that given the KRG’s growing dependence on Turkey, Ankara is now in a better position to intervene on their behalf.

The Erdogan government is also trying to “unclog” its lines of communication with Baghdad in view of ISIS's rise, and because of the very real fear that Iraq might split up, has started to reassert the importance it attaches to Iraq’s territorial integrity. Despite the warm ties between Ankara and the KRG, Foreign Ministry sources told Al-Monitor that an independent Kurdistan emerging out of the ashes of Iraq is still undesirable to Turkey.

There are also signs that Ankara is reappraising its hard-line position toward Egypt’s new government. One such sign was the congratulatory letter sent by President Abdullah Gul to Abdel Fattah al-Sisi after he was recently elected president in controversial balloting.

None of this is in line with Erdogan and Foreign Minister Ahmet Davutoglu’s vision for the region they were spelling out four years ago. That vision was predicated on Islamic unity led by an economically developing Turkey. It even had Erdogan and Syrian President Bashar al-Assad, today bitter enemies, embracing each other as “brothers.”

Western capitals at the time were concerned that Turkey was “drifting eastward” under Erdogan and his Islamist Justice and Development Party (AKP). That vision failed, however, and the Erdogan government embarked on a new vision following the Arab Spring, predicated this time on the belief that the ballot box would bring the Muslim Brotherhood to power as the new force across the region.

Turkey’s sectarian leanings were also embedded in that vision and become more pronounced after it started supporting Sunni groups, both moderate and radical, in Syria against the Assad regime. That vision also failed, not only due to the toppling of the Mohammed Morsi government in Egypt, with unexpected support from Saudi Arabia, but also to Assad’s staying power and the blowback from radical Sunni groups supported in one way or another by Ankara in Syria.

With all these failures, the Erdogan government seems to have no choice but to turn to traditional allies to enhance its security, while trying to adapt its policies to the unexpected situations that have emerged in the region. This was visible during the visit by NATO Secretary-General Anders Fogh Rasmussen to Ankara on June 16.

Following talks with Rasmussen that reportedly covered not only Iraq and Syria but also the situation in Ukraine and Crimea, Davutoglu told reporters that NATO was the international organization today with the highest capacity to intervene in crises in the region. “NATO has to more than ever conduct policies around a new and effective strategic concept,” Davutoglu said, adding that it was also essential for Turkey to increase its cooperation with the alliance.

While Davutoglu was underscoring NATO’s growing importance for Turkey, Erdogan was in close contact with US Vice President Joe Biden after Mosul fell to ISIS, and 49 members of the Turkish Consulate, including the consul general, were taken hostage. According to the daily Sabah, which has close ties to the government, Biden reassured Erdogan on June 12 of US support for Turkey's efforts to bring about the safe return of its citizens and said the United States would stay in close touch with the Turkish and Baghdad governments concerning the security situation in Iraq. Washington has been prodding the Erdogan government to patch up its differences with Prime Minister Nouri al-Maliki's government and align itself more closely with Baghdad to ensure Iraq’s unity. It has openly expressed its displeasure over the independent ties Turkey is developing with the KRG in the strategic field of energy.

Osman Koruturk — Turkey’s special envoy to Iraq during 2003-2005 and currently a leading member of the main opposition Republican People's Party (CHP) — believes Ankara has to rapidly establish a three-pronged approach on Iraq. “It must establish serious contacts with the Maliki government, it must maintain close ties with the KRG, and it must reach out to Iraq’s influential Sunni tribal leaders and convince all the parties how important it is for all of them to maintain stability in Iraq,” Koruturk told Al-Monitor.

Koruturk, a former ambassador and seasoned diplomat, blames Maliki for stoking sectarian divisions in Iraq but believes Turkey may have contributed as well. “When Ankara began to neglect Maliki and started revealing its own sectarian tendencies, it prompted Maliki to lean more on his own sectarian identity. It also deprived Turkey of being an important and impartial stabilizing factor in the region,” Koruturk said.

The threat of sectarian conflict in the Middle East finally appears to be dawning — belatedly perhaps in many respects — on Ankara. Answering questions for reporters in the Black Sea city of Trabzon on June 15, Erdogan said that the situation in Iraq was not just a matter of ISIS. “Perhaps it will turn into a sectarian conflict, a sectarian war,” he said, adding that domestic and external provocations were stoking the situation.

Ibrahim Kalin, Erdogan’s chief foreign policy adviser, referred in a June 17 column in Sabah to “the unstoppable march of ISIS,” which he said has changed the dynamics of the civil war in Syria and the political landscape in Iraq. “As ISIS makes more gains on the ground, the conflict takes more of a heavily sectarian color. This is a very dangerous development for both Sunnis and Shiites. Political and religious leaders need to make every effort to prevent a sectarian war,” Kalin wrote.

In regard to the situation in Iraq and the region, KRG Prime Minister Nechirvan Barzani spelled out the bottom line after Mosul fell to ISIS. “Concerning Iraq, we now speak of before Mosul and after Mosul. The Iraq before Mosul and the Iraq after Mosul will not be the same,” Barzani said prophetically in a interview with the semi-official Anadolu Agency.

Turkey, whose priority today is the safe return of its citizens held by ISIS, is also aware of this and is trying to recalibrate its policies accordingly.