According to the Turkish Foreign Ministry’s assessment, the advance of ISIS in Iraq is driven in part by the legitimate demands of marginalized Sunni communities. 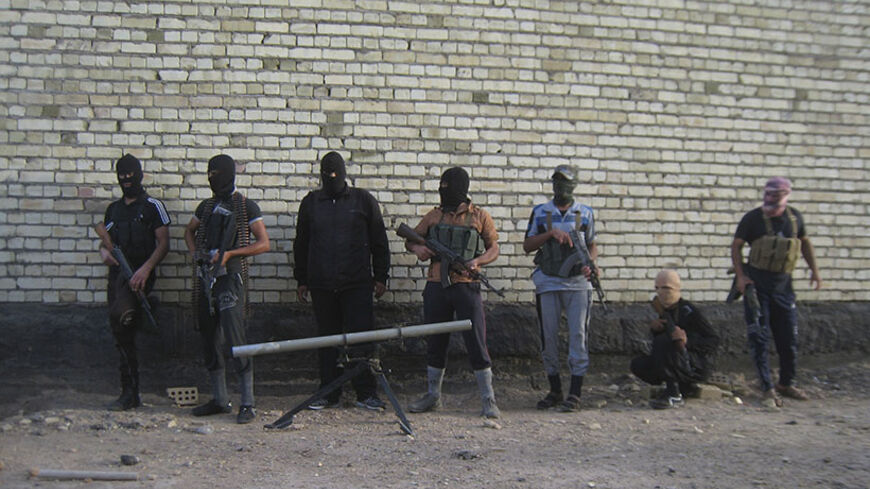 Masked Sunni gunmen pose for a photo during a patrol outside the city of Fallujah, April 28, 2014. - REUTERS

The Middle East is in chaos again. The whole world is closely following Mosul’s occupation by the savage terrorist organization the Islamic State of Iraq and al-Sham (ISIS). Along with Mosul’s occupation and the ensuing developments in Iraq, we in Turkey are also following the case of the Turkish nationals seized from the Turkish Consulate in Mosul.

A crisis desk was set up as soon as the news of the ISIS raid on the consulate reached Ankara. The Turkish government outlined a road map emphasizing the following three points:

Convening in a special session on Turkey’s appeal, the UN Security Council issued a strong statement in support of Turkey, and NATO followed suit. The leaders of both organizations also made statements that satisfied Turkey. Similarly, international outreach to Prime Minister Recep Tayyip Erdogan and expressions of support also pleased Ankara.

In the meantime, back channel diplomacy leaped into action. According to Abdulkadir Selvi, a Turkish journalist close to government circles, the efforts surrounding Iraq moved on three tracks:

On June 16, while Turkish Foreign Minister Ahmet Davutoglu had a working breakfast with NATO Secretary-General Anders Fogh Rasmussen, I contacted sources close to Davutoglu to discuss the general situation in Iraq and ISIS’s occupation of Mosul.

From the Turkish Foreign Ministry’s perspective, the Iraqi government led by Prime Minister Nouri al-Maliki has for years failed to take the necessary steps for political and economic equality in the country, marginalizing the Sunni communities in particular. Maliki’s operations against Sunni politicians like former Vice President Tariq al-Hashimi and former Finance Minister Rafi al-Issavi have been casting Sunnis out of politics. The attempts to arrest al-Issavi in particular are seen as a gross mistake.

One of my sources, who wished to remain nameless, made the following comments: “The al-Issawi affair triggered long-lasting protests against Maliki. The protests, which started two years ago, continued until recently and Maliki responded with violence. The Sunni hatred of Maliki united many different groups. The latest developments are the deed of a coalition that brings ISIS together with groups such as the Military Council of Tribal Revolutionaries, the Mujahedeen Army and the Naqshbandi Soldiers. It gets backing also from old Baathists. ISIS is a terrible terrorist organization, but one has to see the whole picture in Iraq.”

In response to my questions about ISIS, the sources spoke of its links to the Syrian regime. The general perception in Turkey, a conspiracy theory about cooperation between the two, it quite popular among Sunni conservatives.

Here is what my sources said about ISIS: “ISIS contacts with the Syrian regime date back to Iraq’s occupation. Syrian intelligence played a key role in mustering al-Qaeda-linked fighters in Iraq. By virtue of its structure in Iraq, ISIS is linked both to local tribesmen and old Baathist military officers. For instance, Abu Bakr al-Iraqi, the head of the ISIS military council who was killed in Aleppo a few months ago, was a former Baath general. What the media reports as the capture of cities in Iraq by ISIS is a phenomenon with a political and social background going well beyond ISIS. An armed rebellion against the Maliki government involving various Sunni groups is underway in Iraq.”

On the issue of the occupation of Mosul by ISIS and its advance on Baghdad, they said, “There are two reasons for the capture of Mosul by ISIS and the threat it poses to Baghdad. First, the Sunni groups’ anti-Maliki coalition acquired a critical strength as an armed force and was welcomed by populations in the seized cities. Second, Maliki’s army — willingly or unwillingly — put up no resistance. Its inefficiency was the result mainly of the coalition’s deterrence, the demographic structure of the cities in question and the army’s earlier failures in those cities. For quite some time Maliki had been asking the United States for help against the groups that form the current coalition. He labeled the coalition and the protests as terrorism and sought to win the sympathy and support of the international community. And so far he has waged quite a successful campaign in directing all attention to ISIS and overshadowing the legitimate demands of Sunni communities.”

Sources close to the Turkish Foreign Ministry are also concerned about the Sunni groups’ relationship with ISIS, saying, “The Sunni groups in Iraq should not allow their legitimate demands to be overshadowed because of ISIS. The lack of sharing and compromise — deferred for a long time by Maliki — is the main underlying cause of the current crisis, but anti-Maliki groups should reckon the cost that collaboration with a terrorist group such as ISIS will have both for themselves and Iraq.”

In the Turkish Foreign Ministry’s view, ISIS has already proven to be a Trojan horse in Syria. Iraqis with legitimate demands should accurately analyze the Syrian experience. The sources strongly underline that Sunni groups should not project their hatred of Maliki on Shiites in general. Otherwise, they believe, Maliki might exploit the sectarian card just like Syrian President Bashar al-Assad did.