Erdogan: 'No one should expect me to provoke ISIS' 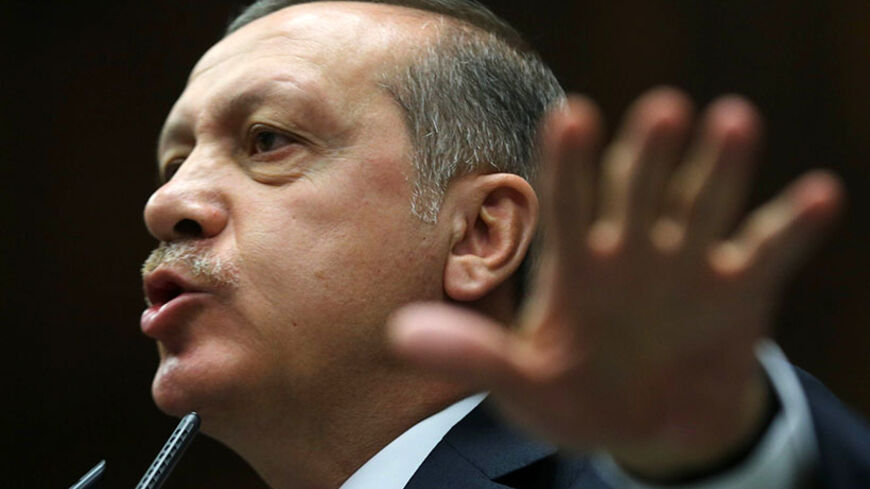 Turkey is maintaining an overly cautious position on developments in Iraq, and steering clear from unilateral or multilateral military actions that may aggravate the situation further.

Ankara is also trying to gauge things to come after advances in Iraq by the Islamic State of Iraq and al-Sham (ISIS), and is closely working with the United States and NATO partners on this.

Rescuing 80 Turkish citizens, including Turkey’s consul-general in Mosul, who were abducted over two weeks ago by ISIS, however, remains Prime Minister Recep Tayyip Erdogan's priority.

His government placed a news blackout on the hostage crisis while Foreign Minister Ahmet Davutoglu, together with Turkey’s intelligence agency MIT, works back channels in Iraq — including Sunni tribal leaders — to secure the release of the hostages.

Ankara fears that a military operation to save the hostages, as some opposition parties are calling for, would endanger them. It is also concerned that military involvement by the West in Iraq, which would require the use of military assets on Turkish soil, will act like a magnet — as was the case in Syria — drawing jihadists who could also stage attacks in Turkey.

German Foreign Minister Frank-Walter Steinmeier told German reporters in Istanbul after talks with Davutoglu, “Turkey does not foresee a military solution in the face of developments in Iraq,” as quoted in the Turkish media on June 22.

Erdogan, for his part, in Ankara on June 25 said, “No one should expect me to provoke ISIS,” while blasting the opposition and its media that accuse his government of passivity in the hostage crisis.

Although it is opposed to a military intervention in Iraq, Ankara is happy with the assurances of support it is getting from Washington and other NATO allies against potential threats from Iraq and Syria.

NATO’s outgoing secretary-general, Anders Fogh Rasmussen, was reported saying, during the alliance’s foreign ministers meeting in Brussels on June 25, that they were in close cooperation with Turkey regarding developments in Iraq, and that NATO would not hesitate to take the necessary steps to defend and protect Turkey.

Davutoglu, who also attended the NATO meeting, told reporters in Brussels that the crises in Iraq and Syria were interrelated now. He said he had discussed the new threats from these countries with US Secretary of State John Kerry during their bilateral talks in Brussels, which had “provided an opportunity for important consultations.”

Davutoglu also denied a report in the German magazine Der Spiegel that claimed Berlin had been considering withdrawing its Patriot anti-ballistic missiles deployed under NATO command in Turkey in February 2013 against missile threats from Syria. “All friendly and allied nations have voiced support for Turkey under NATO mechanisms,” Davutoglu said.

In response to the support it is getting from Western allies, Ankara is also seen to be coordinating closer with Washington and other NATO allies to work out ways the crisis in Iraq may be resolved. Similar to Washington, it has also started pushing for a national unity government in Baghdad.

Vice President Joe Biden, who is overseeing Washington’s Iraq policy, called Erdogan again on June 23 to discuss the issue. The two leaders have been in close contact since ISIS took Mosul earlier this month.

“The vice president and prime minister agreed on the need to continue consulting closely on the situation in Iraq and Syria in the days and weeks ahead,” according to the White House’s transcript of Biden’s call with Erdogan.

Biden’s discussion came days after Kerry was in Baghdad and Erbil, trying to encourage Prime Minister Nouri al-Maliki and the Kurdistan Regional Government (KRG) to overcome their differences. KRG Prime Minister Nechirvan Barzani was in Ankara this week for talks with Erdogan and Davutoglu that focused on the situation in Iraq.

According to daily Hurriyet, he was told of the importance Turkey attaches to a coalition government in Iraq to overcome sectarian divisions and maintain Iraq’s territorial integrity.

Barzani was reported to have responded by underscoring Maliki’s refusal to form a “national salvation government,” characterizing this as “madness.” Some in Ankara, however, also question the sincerity of the Kurds.

One Western diplomat, who wished to remain anonymous, pointed to the high profile the Kurdish Peshmerga have gained by standing up to ISIS, and the concrete gains by the KRG after the ISIS onslaught, such as the taking control of the oil-rich city of Kirkuk.

“They see the tide is against Iraqi unity and appear reluctant to waste a historic opportunity for Kurdish independence,” the diplomat told Al-Monitor.

Widely quoted remarks attributed to Israeli Foreign Minister Avigdor Liberman, after his talks with Kerry in Jerusalem this week, indicate that the notion of Kurdish independence is also being pronounced in the region as a real possibility.

"Iraq is breaking up before our eyes, and it would appear that the creation of an independent Kurdish state is a foregone conclusion," Liberman's spokesman quoted him telling Kerry.

Israel received its first delivery of disputed KRG crude oil recently, shipped via Turkey, in a further sign of the complex web of ties developing as uncertainty over Iraq and Syria grows.

Given the KRG’s dependence on Turkey in this regard, some argue that Ankara has the capacity to rein in the Kurds. Erdogan, however, is not convinced that Maliki is capable of unifying Iraq. He made this clear in an address to EU ambassadors in Ankara on June 24.

“Unfortunately, Maliki being cosseted so much from the beginning is what has brought us to these times. The only way out at the moment is for a coalition government in Iraq today,” Erdogan said.

Given Maliki’s refusal to establish a “national salvation government,” prospects for such a coalition do not look good, regardless of what pressure Washington may put on Maliki and Ankara on the KRG.

Due to the volatility that has come with ISIS, Ankara is also reluctant to lose the advantages it has secured with the Kurds, although it has not given a green light to Kurdish independence. Meanwhile, Turkish officials are also watching Iranian and Syrian involvement in Iraq and trying to factor this into the big picture, which remains fluid.

All this has forced Ankara to return to its policy of taking cautious steps in the Middle East, and steering away from the ambitious — and in hindsight adventurous — policies spearheaded by Davutoglu until only a few years ago.

The Erdogan government is learning the hard way that the cautious approach to the Middle East by previous governments was not a sign of weakness, as claimed, but had to do with the uncertainties that have traditionally governed the region.