Ankara was quiet after the Iraqi Kurdish forces seized Kirkuk, once considered a Turkish red line. 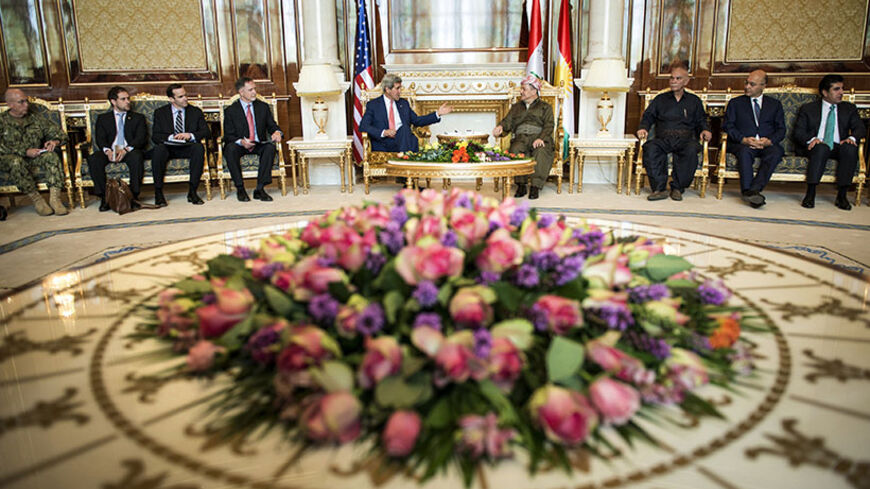 Turkey’s Prime Minister Recep Tayyip Erdogan shared his views on the latest developments in Iraq at a June 24 meeting with the ambassadors of the European Union member states in Ankara. He observed that Iraq is at the threshold of dismemberment.

Noting that 80% of the Iraqi army is made up of Shiites, Erdogan said Iraqi Prime Minister Nouri al-Maliki has been spoiled too much and put forward his exit strategy proposal for Iraq: to form a coalition government as soon as possible.

What Erdogan meant by “a coalition government” is synonymous with a “national unity government” comprising Shiites, Sunnis and Kurds — preferably not under sectarian Maliki as the Shiite prime minister — and is compatible with US Secretary of State John Kerry's attempt to persuade the Kurdish leaders in Erbil.

After meeting in Baghdad with Maliki on June 24, Kerry traveled north to the Iraqi Kurdistan capital to urge Kurdish leaders to join a new unity government and stand with Baghdad in the face of a Sunni insurgent onslaught that threatens to dismember the country.

From remarks by Erdogan and Kerry, we can deduce that the positions of the US and Turkish governments converge.

Kurdish leaders have made it clear that the configuration keeping Iraq together as a state is in jeopardy. "We are facing a new reality and a new Iraq," Kurdistan Regional Government (KRG) President Massoud Barzani said at the start of his meeting with Kerry. Earlier, he blamed Maliki's "faulty policies" for the violence and called for him to quit, saying it was "very difficult" to imagine Iraq staying together.

Since June 10, the course of history appears to have changed irreversibly. The day Islamic State of Iraq and al-Sham (ISIS) fighters seized Mosul and took scores of Turks hostage, Kurds seized Kirkuk, the oil-rich Iraqi city hotly contested by the central government and the KRG as well as Arabs, Kurds and Turkmen, each of whom were making credible claims.

Kirkuk had been the traditional “red line” drawn by Turkey for the Kurds. Simultaneously, it has been considered the “jewel in the crown” for an ultimate Kurdish independent state, without which it would not be attainable.

Since June 10, the wheel of history has turned irreversibly in the favor of the Kurds. They have control over Kirkuk, and it would be naive to think the city would ever be returned to Baghdad’s central government, even if the Kurds consented to a national unity government with or without Maliki as prime minister.

The situation has cornered Turkey — already having tense relations with Maliki — to make a difficult choice between the ISIS fighters who are challenging its regional standing by taking Turkish diplomats and nationals hostage, and the KRG, Turkey’s closest ally in the region, which erased Turkey’s “red lines in Iraq” by seizing Kirkuk.

Ankara’s low-profile reaction to Kirkuk’s seizure have many in the international arena concluding that Turkey will be acting as a midwife for an eventual Kurdish independence, despite Turkey’s hard-line, negative track record on the Kurdish issue and more than half of all the Kurds in the world being Turkish citizens.

Thomas Seibert wrote in a Daily Beast article titled, “Turkey Gives Up On Unified Iraq”: “With ISIS jihadists reportedly preparing for an attack on the Iraqi capital of Baghdad, there are signs that the Erdogan government in neighboring Turkey is giving up on the survival of Iraq as a unified state. Such a move would be a radical policy shift for Turkey, a key US ally and NATO member. Under current Turkish policy, Ankara has been keen to preserve Iraq’s territorial unity in order to prevent a Kurdish state from being created, because such a development could promote separatist sentiments among Turkey’s own Kurdish minority of about 12 million people.”

A similar assessment is made by Time magazine: “The neighbor that a decade ago was most intent upon keeping Iraq together is now allied with its most ardent separatists — the Kurds — removing a key obstacle to the dismemberment of Iraq as Sunni extremists gain territory.”

Although there are signs to support such arguments, they are still far-fetched. Turkey, the most dedicated opponent of a Kurdish independence for decades, cannot substantially change its dedicated strategic state policy overnight, simply because of some military ISIS gains in the Iraqi battleground that facilitated Kurds’ grab of Kirkuk. Observers tend to ignore potential reactions of Turkey’s nationalists to Ankara’s acquiescence to the creation of a Kurdish state with all that this implies for the restive Kurds in Turkey.

The convergence of Erdogan’s and Kerry’s positions on the latest developments in Iraq attest to this fact.

It is still too early to predict whether this convergence would prevent Iraq from splitting and block the Kurds from achieving their long-sought aspiration.