Turkey is flirting with Baghdad while dancing with Erbil. 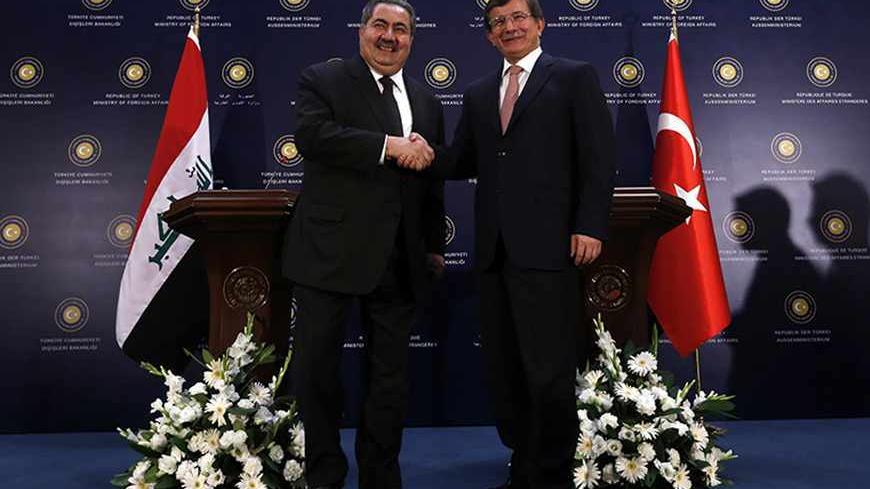 The collapse of Turkey’s "zero problems with neighbors" policy could be traced back to Ankara’s efforts to bring the Sunnis to power following the Iraqi elections of 2010. The Baghdad-Ankara link was severed by Turkey's developing strategic relations with the Kurdistan Regional Government (KRG) over the past three years; granting refuge to former Iranian Vice President Tariq al-Hashemi, who is sought by Interpol; Foreign Minister Ahmet Davutoglu’s "unauthorized” visit to Kirkuk; the denial of permission for the Turkish energy minister’s plane to fly to Erbil and conflicting policies in the Syria crisis. Our Orient Express finally went off the rails and crashed in Syria.

Now the Justice and Development Party (AKP) government is working back to repair the collapse. As part of plans to bring Iraqi Prime Minister Nouri al-Maliki to Turkey to make a fresh start, Iraqi Foreign Minister Hoshar Zebari was received in Ankara. Then, Davutolgu paid a two-day visit to Iraq to discuss the details of the proposed Maliki visit. Symbolic dimensions were added to the visit by Maliki remarking, “We want good relations based on common interests, mutual respect and non-intervention in domestic affairs.” Davutoglu, as if to wash his hands of the Sunni-Shiite tension stimulated by the proxy war in Syria, went to Najaf, the Shiite stronghold, to meet with Grand Ayatollah Ali Sistani and Muqtada al-Sadr, the leader of the Sadr movement. Davutoglu, in Shiite mourning attire, then visited the shrine of Imam Ali in Najaf and Imam Hussein in Karbala, saying, “May Allah bless us by allowing us to walk in the footsteps of Imam Hussein.”

Although these gestures don’t offer a guarantee to end the tensions of the past three years, they do make it easier to draw up a new road map for bilateral relations. That road map is laid out like so: Turkish parliament speaker Cemil Cicek will go to Iraq in November. Cicek had pursued a similar mission of easing tensions with Tehran. Then, in December, technical teams would meet to prepare to reactivate the “High Level Strategic Cooperation Council” that was suspended. If it can be arranged in time, the council will meet during Maliki’s first visit to Ankara.

Shivan Perwer and the Barzani card

Of course, this new road map requires the crafting of new balances in the Baghdad-Erbil-Ankara triangle.The AKP government, as tensions grew with Baghdad, developed bilateral relations with the KRG with exaggerated strategic ambitions both to benefit from economic opportunities offered by the region and to make use of Erbil’s influence over the Kurdish process in Turkey. Turkey feels the necessity of maintaining coordination with Erbil while mending its bridges with Baghdad.

Right at this critical juncture, Turkish Prime Minister Recep Tayyip Erdogan is to host Massoud Barzani, the president of the KRG, at Diyarbakir Nov. 16-17. Erdogan, uneasy with the stalling of the solution process with the Kurdistan Workers Party (PKK), will try to convey his messages through Barzani, who earlier had turned down the invitation of the Kurdish Peace and Democracy Party (BDP) to attend the Nowruz celebrations ion Diyarbakir. That is Erdogan’s way of trying to diminish the BDP's role in the Kurdish issue.

There is another factor that will add to Erdogan’s message: Barzani will bring with him the famous Kurdish singer Shivan Perwer, who had left the country when she got into trouble with the state because of her Kurdish songs in 1976. Perwer's return after 37 years is an important move in Erdogan's dance with the Kurds in the lead-up to local elections. Erdogan personally announced that Perwer will be coming with Barzani and will perform a duet with top Turkish folk singer Ibrahim Tatlises.

Erdogan actually wants to kill four birds with one stone. The first is to get the stalled strategic projects between Ankara and Erbil moving. The second is to use Barzani to influence the developments in Rojava (Syrian Kurdistan). The third is to gain more maneuvering room in the stalled solution process with the PKK. Finally, he wants to attract Barzani’s supporters in Turkey to the AKP and defeat the BDP in Diyarbakir.

Starting with the last goal, one has to understand that any votes the AKP gets from the Kurds come from a conservative-religious base that Barzani can influence. But given the disappointment of the Kurds with the solution process, the AKP’s hostility to Rojava and the Kurdish anger over the embargo Barzani imposed on it, a successful election in Diyarbakir may not be all that significant. As for the peace process, Barzani may play a facilitator role, but the government has no real option except to talk to the PKK and the BDP. Barzani’s room to maneuver in Rojava is shrinking as PYD-affiliated groups form a constituent assembly on the path to autonomy.

Ankara’s policy of exerting pressure on Rojava through Barzani has not produced any results as of now, and there are no signs this situation will change.

The future of energy lines

Of course, there will be a heavy political agenda behind the visions of Erdogan and Barzani — or Perwer and Tatlises — that is bound to create tension among the Kurds of Turkey. In the talks with Barzani, the main items will the future of oil and natural-gas pipelines that will enable the Kurdistan Region to export directly, the involvement of the central government in these projects, electricity sales to Northern Iraq by Turkish companies Karter and Aksa, the solution process with the PKK and new developments in Rojava toward the declaration of an autonomous Kurdish administration.

The most important agenda item will be the energy lines from Kurdistan to Turkey, a topic that upsets Baghdad and disturbs Washington. Because of the sensitivity of the issue, agreements on pipelines reached with the Kurds are not officially acknowledged. There is also talk of a project that would allow an annual flow to Turkey of 10 billion cubic meters of natural gas from Iraqi Kurdistan’s Miran and Bina Bawi fields. An official speaking to Reuters said about this line: "The four pillars of the agreement are natural gas, oil, fields and pipelines. Technical negotiations on all of them have been completed with 100% accord. Genel Enerji will transport the first gas to Turkey. Annual gas flow from Northern Iraq will start with at least 10 billion cubic meters and will go up to 20 billion cubic meters. The first arrival of gas could be in 2017, after the construction starts next year. Preliminary engineering work has been completed."

New oil pipeline laid by the Kurdish government is about to be finished. The source talking to Reuters said the oil could start flowing in December. “Full capacity flow through this pipeline could be in the first quarter of next year. When this pipeline is connected to the Kirkuk-Ceyhan line, at most, 600,000-700,000 barrels a day could be shipped. A second pipeline will enter the line later.”

Ashti Hawrami, the KRG's energy minister, had spoken about a new pipeline parallel to the Kirkuk-Ceyhan pipeline to transport oil of lesser quality.

The Baghdad government has been reacting strongly to the KRG’s independent oil-exportation operations. Baghdad has been allotting 17% of its total oil revenue to the KRG. Turkey now wants to benefit from the new pipelines before they add to Baghdad-Erbil tensions. That is why Turkey has to determine the point of convergence of interest between Barzani and Maliki.

In brief, the US dialogue with Iran, miscalculations in the Syria crisis, Turkey becoming a party to sectarian conflict as never before and the reality that strategic projects cannot be implemented unless regional calm prevails, as observed in Northern Iraq, are forcing to Turkey to take a fresh look at its foreign policy.

The most critical issue is how to set up a new balance in the Ankara-Erbil-Baghdad triangle. When Erdogan took power, he frequently talked of “win-wins." What his dancing with Erbil and Baghdad at the same time promises to the three parties is simple: If oil and natural gas flow through pipelines with an agreement among the parties, all three will win. That is what the United States wants, too.

It is not really a coincidence that Turkey-Iraq dialogue resumed after Maliki’s Washington visit. The last three years have illustrated that both Turkey and Iraq lose from tensions. This may encourage Erdogan and Maliki to agree on common interests. If they succeed in that, then there will be no losers.