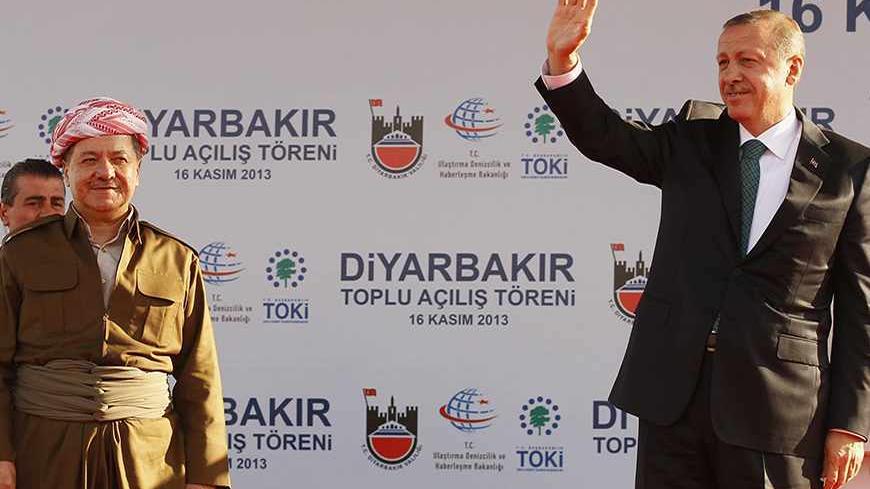 Last weekend Turkey lived through many "firsts" at Diyarbakir, which is seen by all Kurds — not only the ones in Turkey — as their "spiritual center."

The weekend meeting, labeled as the "Diyarbakir encounter," bringing together Turkish Prime Minister Recep Tayyip Erdogan and Kurdistan Regional Government President Massoud Barzani, was choreographed by Erdogan. It was, above all, a phenomenal public relations achievement for the prime minister.

The Diyarbakir encounter can also be considered a significant political comeback for Erdogan, whose image inside the country and abroad has suffered considerably after the Taksim-Gezi protests at the beginning of the summer.

The event was planned so that Barzani would travel by road from Erbil to meet Erdogan in Diyarbakir, where they would attend several functions, including the laying of foundation stones for many projects and attending the mass marriage ceremony of 300 couples. But that wasn’t the whole drama. Legendary Kurdish singer Shivan Perwer, who left Turkey — where his cassettes were banned — 37 years ago, was to return to his country with Barzani. By performing duets with Turkey’s world-renowned singer Ibrahim Tatlises, he was to take part in the traditional Kurdish marriage as well as the “political marriage rites” of the Turkish prime minister and president of Iraqi Kurdistan.

For Tatlises to publicly sing for the first in time several years after an assassination attempt left him wounded — and to sing with Perwer, at that — was not only an unprecedented show, but a mind-boggling event that nobody could have dreamed of. Tatlises miraculously survived the assassination attempt, underwent a long recovery process and had given up the stage. Perwer had never been on stage in Turkey and had never appeared before the Kurds of Turkey who had made him a legend. They both started their life journeys in Turkey’s southeast in locations close to each other. Perwer is a Kurd, and Tatlises is an Arab-Kurd mix who can speak and sing in Kurdish.

The Diyarbakir encounter brought with it so many metaphors and symbols. On that Saturday, life came to a standstill in Turkey. All TV channels transmitted live from Diyarbakir. Not only Kurds, but tens of millions of Turks listened to Barzani's speech translated into Turkish as he spoke under the flags of Turkey and Kurdistan. He concluded his speech in Turkish by shouting, “Long live Turk-Kurd brotherhood, long live freedom, long live peace.’’

Barzani, with his title of Kurdistan president, was speaking in Kurdish in a city accepted as the center of Kurds, in front of tens of thousands of Kurds and alongside the prime minister of Turkey. If a Turkish nationalist had seen this in a dream, he would not have recovered from this nightmare for a long time.

People listened to short speeches in Turkish and Kurdish by Perwer and Tatlises, and heard them sing the Kurdish song "Don’t Cry," which includes references to peace. Those in attendance, led by the Turkish prime minister’s wife, Emine, were touched by the sentimentalism of the day and the Perwer-Tatlises duet. They could not hold back their tears.

Erdogan — a powerful and effective orator — delivered a long speech that was adorned with emotionally voiced poetry to win back the hearts of the many people he had offended for months. Even the most virulent critics and opponents of the prime minister admitted in private conversations that Erdogan had performed a master move and that he was an outstanding chess player. They conceded with admiration that he is an unpredictable political player who has the ability to reverse everything.

This was Erdogan's first visit to the metropolitan municipality, which he had avoided in previous visits to Diyarbakir. For his last four terms, the Diyarbakir municipality has been in the hands of the Peace and Democracy Party (BDP), which is influenced by the Kurdistan Workers’ Party (PKK).  Because the BDP has 70% popular support, Diyarbakir is not expected to vote for Erdogan’s party in the March 2012 local elections.

Erdogan, by visiting the Diyarbakir municipality and meeting with the BDP mayor and BDP parliamentarians, has injected a strong dose of life into the solution process for the Kurdish issue that the PKK and BDP had portrayed as being in a coma.

It was vital for Erdogan — who is preparing for two critical elections in 2014 — to show that the solution process, which has been in crisis mode since the beginning of September after a PKK announcement to suspend its withdrawal of armed elements, can actually be revitalized. It was important for him to psychologically disarm the BDP members who saw the Barzani visit as part of the “divide and rule policy of the Turks.”

Erdogan’s visit to his political opponents — another first — was a successful maneuver. His meeting with Barzani helped erase speculation about the aims of Barzani's visit.

Before coming to Turkey, Barzani accused the Syrian Kurdish Democratic Union Party (PYD) of trying to create a kind of "autonomous administration" for Syrian Kurds. It isn’t a secret that there is conflict between Barzani’s Kurdistan Democratic Party and Abdullah Ocalan’s PKK regarding Syrian Kurds, and that this disagreement caused the postponement of the First Kurdistan National Congress that, after two postponements, was to meet in Erbil on Nov. 24.

There were many who believed that the grand marriage ceremony in Diyarbakir, crowned by the Perwer-Tatlises duet, had the potential to represent a political matrimony between Erdogan and Barzani against Tehran, Damascus and even Baghdad. It was also seen as a matrimony of the unique Turk-Kurd alliance against the PKK and its Syrian extension, the PYD.

Erdogan's speech in Diyarbakir confirmed this line of thinking. He performed another spectacular first that continues to rattle Turkey — uttering, for the first time, the word "Kurdistan." No Turkish president or prime minister has dared do such a thing. A bit strange, perhaps, but true.

In addition to the series of dramas staged with Barzani in Diyarbakir, for Erdogan to use the word "Kurdistan" will inevitably legitimize this concept and lead to major developments that are unpredictable today.

This is why many Kurds — and some Turks sympathetic with the Kurdish struggle — see the Erdogan-Barzani encounter, or Turkey-Kurdistan nuptials, as a dagger thrust between the Kurds.

Today, Erdogan and Barzani, two conservative leaders who have ambitious oil and natural gas deals between them, are in the process of forming an alliance similar to the one forged by Ottoman Sultan Selim I with the region's Kurdish lords against Shiite Iran. This new alliance is an inevitable byproduct of a Sunni axis in Mesopotamia and it will seek a solution to the Kurdish issue by sidelining the PKK in Turkey and PYD in Syria.

Will the Erdogan-Barzani rapprochement facilitate a solution to the Kurdish issue? Or will it manifest itself as the final successful application of Turkey’s policy of "divide-and-rule" among the Kurds, with US endorsement, as well as seek the elimination of the PKK? That, of course, means the solution of the Kurdish issue will be impossible.

We will soon get the answer to this question. But whatever the answer, nobody can deny that the Diyarbakir encounter has been a milestone that will have determinate consequences for the entire region.

Just as nobody can deny that Erdogan — no matter how the near future will judge him — has been the most effective politician of Turkey for the last half-century.