Diyarbakir is ready for the historic visit 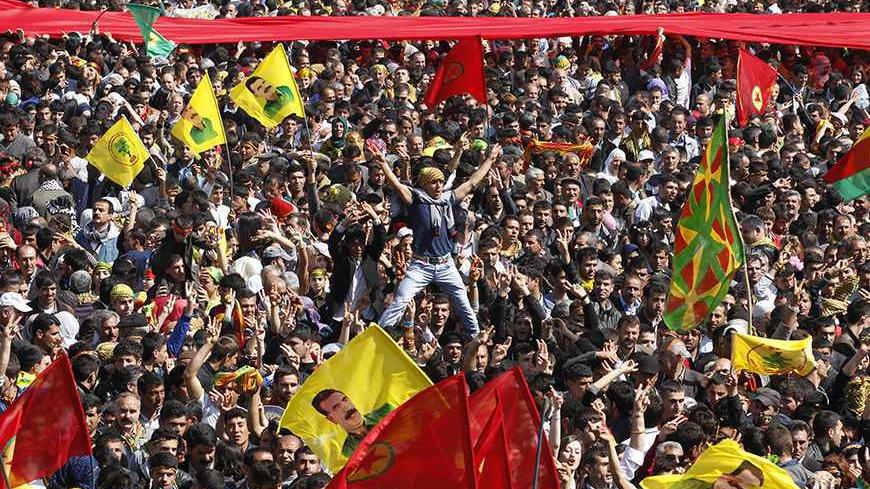 Indeed, it is going to mark the first visit of Barzani to Diyarbakir — the hotbed of Kurdish nationalism in Turkey — as president of the KRG. It also will be Shivan Perwer’s first visit to his hometown after 37 years in exile in Germany.

Perwer escaped Turkey when court cases against him started to pile up because he insisted on singing and recording Kurdish songs. Those court cases abated in his absence, and he has never been convicted. But he became a symbol of the Kurdish people of the suffering brought about by not being able to use Kurdish freely.

His return, therefore, is promising to be an emotional one. Ruling Justice and Development Party buses touring Diyarbakir today even played Perwer’s songs in Kurdish. There also are posters in Kurdish across the city using the letters Q, W, and X, (which became legally acceptable by Erdogan's announcement of the democratization package in October) stating, “The master of the peace process, our prime minister, is coming to Diyarbakir.”

The Turkish government likes to give the message that the negotiation process with the Kurdistan Workers’ Party, PKK, is moving forward without interruption, and that there is no going back from it.

Erdogan also said that Ibrahim Tatlises, a well-known singer in Turkey of Kurdish origin, has been invited to sing a duet with Perwer. Tatlises survived an assassination attempt in 2011 and this will be his first public performance since then. Putting aside the politics, people are excited about the coming performance.

Tatlises expressed happiness about taking the stage with Perwer — whom he described as the king of Kurdish singers — but also wished he could be in better health so that he could perform at 100%.

People certainly read more into the details of this visit. “Massoud Barzani and Shivan Perwer are two symbolic names for the Kurdish people here,” Veysi Polat, a Diyarbakir-based journalist and documentary filmmaker, told Al-Monitor. “People who joined the Kurdistan Workers’ Party have grown up listening to his songs in the mountains. It now feels sort of awkward that he is returning to Diyarbakir with an AKP organization. It’s the same puzzle about Barzani’s visit.” He added: “We believe that all four segments of Kurdistan in this region, that are spread between Iraq, Iran, Syria and Turkey, are all linked to each other. As much as there are question marks about Barzani’s visit, people still feel good about his decision to meet Diyarbakir mayor Osman Baydemir on Sunday. It will help to ease those questions about him as we really don’t believe that he should have taken a step alongside Erdogan. We, however, continue to hope that he will make some statements at the price of disappointing Erdogan. We expect that he will make a reference to PKK leader Abdullah Ocalan during his speech, and call for Ocalan’s freedom and ability to participate in politics.”

Whether Polat’s views are shared by a majority or not, there are certainly some Kurds who consider this meeting in Diyarbakir between Erdogan and Barzani a positive step. Yet some people question whether Erdogan is trying to score points in his favor by showing up with Barzani in Diyarbakir while local elections set for March 2014 are approaching. In general, many Kurds believe Erdogan is trying to benefit from Barzani’s visit in his calculations about domestic politics, and that in return Barzani will gain some leverage to have a say in Turkey’s internal affairs.

“Without a doubt, Erdogan is trying to win some votes in the region with this visit,” Umit Ozdag, head of the 21st Century Turkey Institute, told Al-Monitor. “In the last local elections in 2011, the AKP received 37.3% of the Kurdish votes among the 12 cities in this region, whereas the pro-Kurdish Peace and Democracy Party (BDP) won 51% of the votes. All public opinion polls suggest that BDP’s votes are increasing in the region. That is why Erdogan is meeting Barzani in Diyarbakir, but it is a very risky policy, for it makes Barzani a direct player in Turkey’s internal affairs.”

While there is so much anxiety and expectation about this visit, the city also is preparing feverishly for tomorrow’s [Nov, 15]events, where Erdogan and Barzani will attend a mass wedding ceremony of 300 couples. All the roughly 20 hotels are fully booked full until Monday, after the visit, and there is still an endless demand for accommodations. About 240 journalists, 30 of them foreigners, have signed up to cover this visit. Now, people are waiting for the show to begin, and will listen carefully to Erdogan and Barzani’s messages, and to how the Perwer and Tatlises duet will sound.

It is, after all, going to be a historic day in Diyarbakir on Saturday, for it will solidify Barzani as an undeniable player in Turkish politics. In the end, though, Erdogan and his government may risk finding out the limit of his influence.