Ankara is recasting its policies toward Cyprus, Israel, Azerbaijan and Iraq. 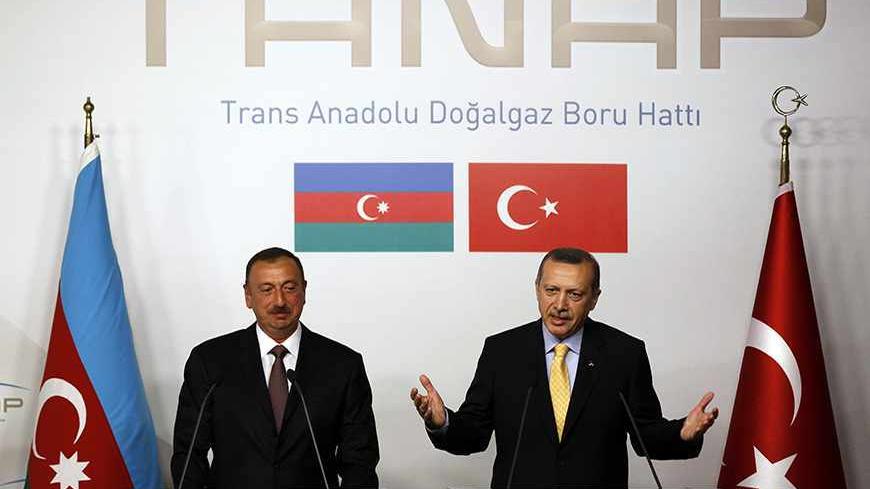 After testing the realities of its entire neighborhood on a trial-and-error basis, with not-so-tangible achievements and alienation, the huge vessel of Turkey is changing its course toward a new type of "zero problems" destination.

It shows clear signs of abandoning its earlier line, based on maximalist confrontation, anger-fueled rhetoric and diplomatic reciprocity, which has in the past two years led to what is coined as "worthy solitude" — a term which has not meant a "win-win" either for itself or for the neighbors.

The reset is based on a realism, which may replace sectarian-based, neo-Ottomanist-driven policy. Given the energy-dependent nature of the country, which needs growth, a strong middle class, international finances’ confidence and domestic stability, Ankara now focuses on optimizing for itself the vast resources of its neighbors and aims to become a huge energy hub for the region.

Febrile diplomatic activity currently with Baghdad, Erbil, Athens, Nicosia, Baku and Washington, DC — and eventually Tel Aviv — should be seen in this vast, regionally vital context. If the new line pursued a return to realism for Turkey, it could be a game-changer for its allies for seeking a new balance for predictability and stability in the Middle East and Caucasus — a Draconian endeavor.

The starting whistle was with Iraq. To mend fences with Baghdad, the Justice and Development Party (AKP) government exerted much effort to stave off the animosity between Nouri al-Maliki and Recep Tayyip Erdogan, prime ministers of Iraq and Turkey. It seems that, given also the reality of the US-Iran rapprochement, an agreement for a new era is underway.

Erdogan is keen to reassure Baghdad that it will not be sidelined when the relations deepen with Iraqi Kurdish leaders on developing pipeline projects between Iraqi Kurdistan and Turkey. A pipeline built by the Kurdistan Regional Government (KRG) is already complete, to start in early 2014. A second link, with the capacity of 3 million barrels per day, is planned. It will run parallel with the aging Kirkuk-Ceyhan pipeline.

For Turkey, it requires several challenges: agreement with Baghdad that there will not be an independent Kurdistan (which is the easy part); closer ties built on full mutual trust (as opposed to before) with the KRG; regional "guardianship" of the Kurds and their well-being; an end to division among them; and, ceasing all kinds of support for offshoots of al-Qaeda in Iraq and Syria.

If the overtures with Baghdad and Erbil end with a triple "win-win," more or less the same is in play among Israel, Cyprus and Turkey.

Most recently, it is reported that Cyprus has seen more progress in its energy export ambitions. "Total’s interest in participating in the LNG project on the island was penned in an MOU [memorandum of understanding," wrote Karen Ayat, an analyst of energy geopolitics in the eastern Mediterranean.

The new Cyprus initiative for settling the 40-year conflict is to be seen against this background as well. According to an agreement between the foreign ministers of Turkey and Greece, Ahmet Davutoglu and Evangelos Venizelos, representatives from the breakaway Turkish Republic of Northern Cyprus (KKTC) and Greek Cypriot administration would make "cross visits" to Turkey and Greece.

It means a new modality in talks, broadening the diplomatic context to Athens and Ankara. If progress is noted, it would have energy as a "win-win" incentive.

“A settlement will have benefits far beyond the island. It will also have a profoundly positive effect across the Eastern Med and on NATO-EU relations,” said Victoria Nuland, the US assistant secretary of state for Europe and Eurasian affairs, some days ago.

Meanwhile, Israel is moving ahead by considering its options for gas exports from its Tamar field. Production began on March 30, and the Leviathan field is due to operate in 2015. These fields contain about 30 trillion cubic feet of gas. A pipeline under the eastern Mediterranean from Leviathan to Turkey is one of the more ambitious, and very likely, options.

If it comes off, it could pump 105.9 billion cubic feet of gas a year to Turkey. A Turkish company, Zorlu, said it wants a 15-year contract to buy Israeli gas. This is in line with Turkey’s energy minister, Taner Yildiz, who said recently that "Turkey is interested in Israeli gas."

These remarks may seem contradictory to Turkish Prime Minister Erdogan’s hostile attitude to the Benjamin Netanyahu government, but as Joseph Dana, an analyst, pointed out, "It is no secret Erdogan has bold ambitions for his country's regional and international standing. Traditional adversaries, like Israel and the Kurds, are now the backbone of Turkey's strategic future."

Yet, both Cyprus and Israel will require sharp shifts on Turkish foreign policy of recent years. Greek Cyprus has again displayed its traditional maximalism in the preludes to new talks, and Greece acts in extreme caution due to its domestic tensions. It will therefore demand a bold, decisive lead from Turkey for any progress at all.

Israel is a different challenge. It is no longer a secret that Erdogan incurred the huge disappointment of US President Barack Obama when he did not follow up on the telephone apology by Netanyahu, thus losing key momentum to repair relations with Israel. Now, with Avigdor Liberman, a tough adversary to Turkey, back as foreign minister, Netanyahu has the upper hand against Turkey and the United States on the issue. Nevertheless, if realism prevails, an Israeli-Turkish thaw may be helpful even to soften the Cyprus equation as well, because of the strains on the latter’s economy.

The most recent visit by Ilham Aliyev, Azerbaijan’s newly re-elected president, confirms Ankara’s endorsement of an energy-driven neighborhood policy. Both leaders agreed that the Trans-Anatolian Pipeline (TANAP) between two countries be completed in 2018, with around 16 billion cubic meters of natural gas per year to be produced. Ankara says around 6 billion cubic meters will be consumed by Turkey, while the rest will be sent to Europe.

Kenan Yavuz, the CEO of the State Oil Company of Azerbaijan Republic (SOCAR), has stated that Azerbaijan would become Turkey's largest energy investor next year.

Baku may be seen as the easiest part for Ankara. Yet, with the 100th anniversary of the Armenian genocide looming, and a normalization shelved with Armenia, the AKP government would inevitably face pressure from its allies and the EU. The deadlock slows down Turkish accession to the EU and isolates Armenia from economic integration to the West. Ankara hopes that with a new Swiss mediation for resolving the Nagorno-Karabakh conflict, it will gain time and keep some trump cards at hand.

In a nutshell, Turkey has entered a new phase on its neighborhood policy, still keen on "zero problems," with no or very weak diplomatic relations with four of them, restarting from "square zero." Many balls have to be juggled, with a lot of uncertainties.