The negotiations over the future of Cyprus are linked to energy reserves in the Eastern Mediterranean. 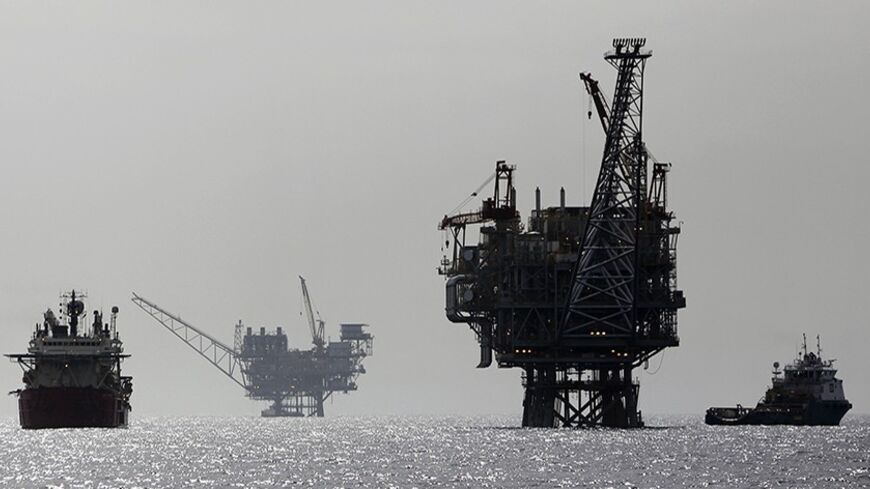 Israeli gas platforms are seen in the Mediterranean sea, some 15 miles (24 kilometers) west of the port city of Ashdod, Feb. 25, 2013. - REUTERS/Amir Cohen

Turkish and Greek Cypriot leaders resumed talks on Feb. 11, in a fresh effort to try and resolve the Cyprus problem of over 50 years' standing. These talks follow a hiatus of a year and a half, and are the result of a forceful intervention by Washington, which has taken the lead again in efforts to reunite the divided island.

Diplomats and analysts indicate that given current developments in the Middle East, a settlement on Cyprus will also contribute to stability in the Eastern Mediterranean, and argue this is one of the reasons behind the current US intervention. There also exists a much better atmosphere between Turkey and Greece today, with the two countries appearing to have put knee-jerk nationalism aside, which increases the prospect for a settlement to the Cyprus problem.

The discovery of vast natural gas and oil reserves in the Eastern Mediterranean has provided a new catalyst for peace and cooperation in the region. Diplomats say this is also driving efforts by Turkey and Israel to resolve their differences. Energy experts maintain that a Cyprus settlement, combined with normalized ties between Turkey and Israel, will turn the Eastern Mediterranean into a new and reliable source of energy for international markets.

According to Noble Energy, which is exploring off the southern coast of Cyprus, there is the potential for 3.7 billion barrels of oil and 200 billion cubic meters of natural gas in the block it has been surveying. These figures have yet to be confirmed, but the general understanding is that vast reserves are involved.

Turkey says these reserves can only be exploited after a settlement between the two communities on the island and opposes unilateral actions by Greek Cyprus in the energy field, arguing that this disregards the rights of Turkish Cypriots. Ankara has said it is prepared to uphold this position militarily if necessary, and has already intercepted foreign research and exploration vessels cooperating with the Greek Cypriot administration in regions where Turkey says Turkish Cypriots also have rights.

Cyprus and Israel have already moved ahead with energy cooperation, but both countries have problems in terms of sending their gas to world markets. Greek Cypriots were loath to accept that the most viable route for their gas to Europe and beyond is over Turkey. They seem, however, to be coming around to accept this.

Israel, on the other hand, has to also find the most profitable route to international markets for its gas, which is far in excess of what it needs domestically, and which can turn the country into a major energy player. A pipeline between Israel and Turkey, according to experts, is the answer.

In a recent article for Bloomberg, Matthew Bryza, a former US ambassador to Azerbaijan who is on the board of Turcas Energy Group AS, which is backing an Israel-Turkey gas pipeline, asserted: "Turkish officials have indicated that the restoration of relations with Israel could occur in tandem with an agreement to build an Israel-Turkey natural gas pipeline."

Meanwhile, Hugh Pope, an expert with the Brussels-based International Crisis Group, even suggested in a piece for the Greek daily Ekathimerini in September 2013 that Israel has been working for a Cyprus settlement to enable energy cooperation between the three countries. Some diplomats see a connection between the Israeli position and the revived US interest in Cyprus.

The talks, headed by Turkish Cypriot leader Dervis Eroglu and Greek Cypriot leader Nicos Anastasiades, which started in the UN-controlled Green Zone between the two communities, came after months of tough bargaining. One of the thorniest issues has concerned the nature of the new unified state to be established, and how sovereignty is to be shared between Turks and Greeks on the island.

Judging by the wording of the joint declaration signed by Eroglu and Anastasiades, an agreement has been reached in principle for a bizonal federal Cyprus based on equally shared sovereignty. The sides will nevertheless be independent in internal affairs, although Cyprus will have a single identity, flag and citizenship for the sake of international relations. Meanwhile, union by either side with another country, which in this case means Turkey and Greece, will be illegal.

It all sounds easy on paper, of course, but this is Cyprus, which has witnessed numerous false starts. It seems best, therefore, to keep a healthy dose of doubt in reserve. There nevertheless are reasons to be more hopeful this time around. The political and economic conjuncture in the Eastern Mediterranean is changing fast and posing new threats, as well as providing new opportunities, mainly due to the discovery of vast energy reserves.

It only remains to be seen now if these reserves will actually contribute to reducing tensions, by also bringing a workable peace to Cyprus, or be the cause of new conflicts. If rationality prevails between Turks and Greeks, and Turks and Israelis, this can only benefit the region.